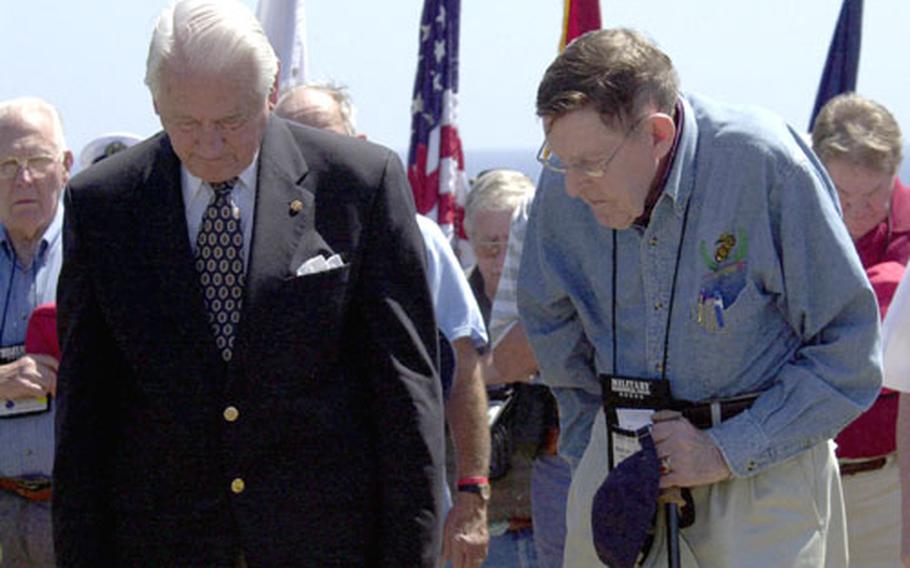 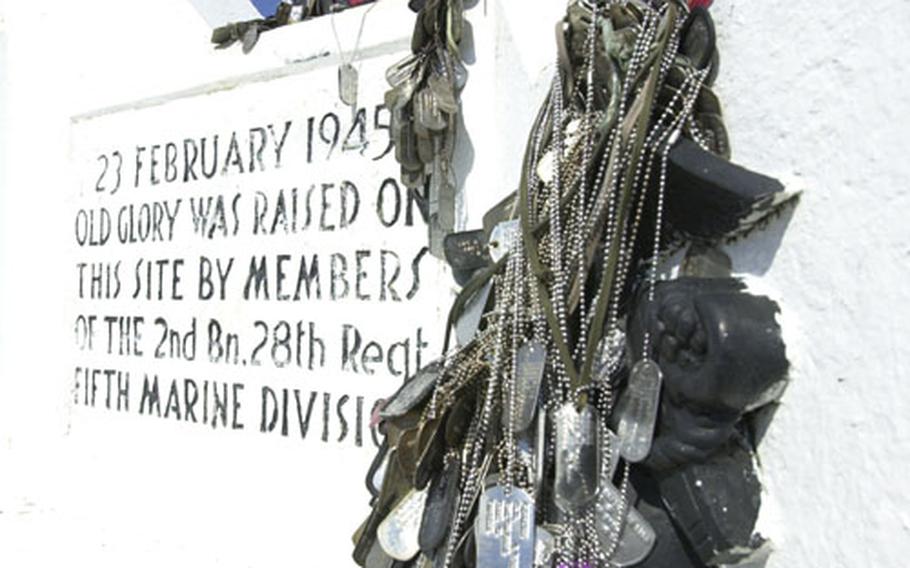 The monument paying tribute to the Mount Suribachi, Iwo Jima, flag raising in 1945 is adorned with dog tags of U.S. servicemembers who visited the site. (Fred Zimmerman / S&S)

IWO JIMA, Japan &#8212; Men once hellbent on killing one another gathered here Wednesday in peace to pay tribute to the more than 27,000 comrades who never walked away from the black-sand beaches of this strategic Pacific island.

Former U.S. and Japanese servicemembers met at the Reunion of Honor monument for the 61st anniversary commemoration ceremony honoring those who fought here. The monument sits on a hill overlooking Yellow Beach, where in World War II many U.S. Marines landed on Japanese soil for the first time on Feb. 19, 1945.

The island was important to the United States strategically. It offered an air base close to mainland Japan for U.S. bombers and escort fighters and was a safe haven for crippled aircraft. The importance of Iwo Jima became evident as 2,251 B-29s carrying 24,761 crewmen made emergency landings there by the end of the war.

One Marine who fought on Iwo Jima, retired Lt. Gen. Larry Snowden, said during Wednesday&#8217;s ceremony that standing on the black beaches makes memories come back.

The commanding general of III Marine Expeditionary Force, Lt. Gen. Joseph Weber, also spoke during the ceremony, saying: &#8220;The one common purpose we have is to remember the fallen of both sides. The men who fought on Iwo Jima were willing and innocent young men who were robbed of their youth.&#8221;

Despite the vicious battles of World War II, the United States and Japan since have built a strong alliance.

Kiyoshi Endo, Japanese Iwo Jima Veteran&#8217;s Association chairman, told the audience, &#8220;Our responsibilities and duties are to dedicate the rest of our lives to passing the memories on to our next generations, so that a tragic battle of this kind would never be repeated.&#8221;

Time is said to heal all wounds, Snowden said during his speech, but even 61 years later, some men on both sides still may have a hard time erasing all bitterness.