Iwakuni works to repair damage left behind by typhoon 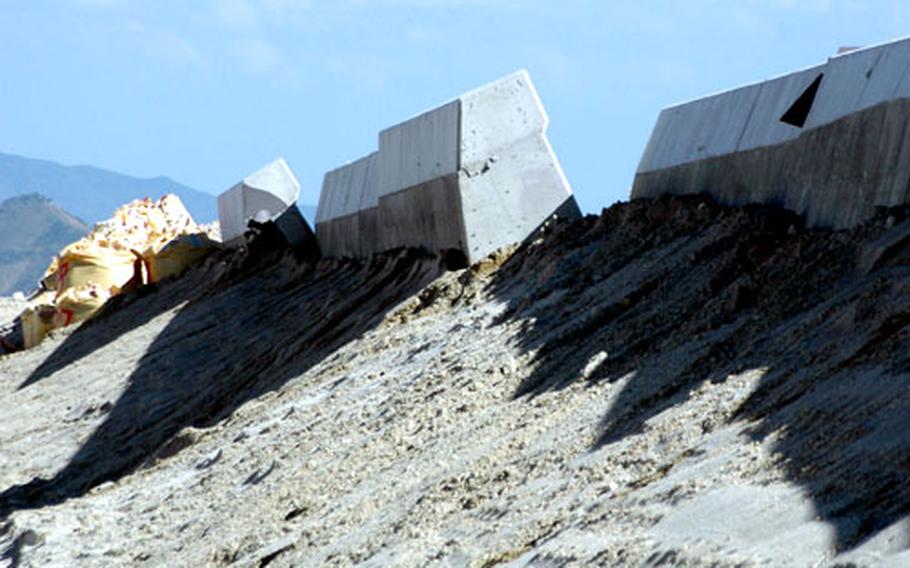 Strong waves from last month’s Typhoon Songda pummeled this area along a new seawall that is part of the Iwakuni Marine Corps Air Station Runway Relocation Project. Despite damage to the runway site, construction is still slated to be completed in 2008. (Greg Tyler / S&S)

IWAKUNI MARINE CORPS AIR STATION, Japan &#8212; A visitor to Iwakuni who is unaware of the beating it took from Typhoon Songda last month might not notice anything amiss.

Most damage caused by the powerful pounding of the Sept. 8 typhoon appears to have been repaired. And the damage at the Iwakuni Runway Relocation Project site, shown to the media Thursday, does not seem overwhelmingly problematic.

&#8220;We worked really hard to get the damages fixed as quickly as possible after the typhoon to keep the base functioning and attractive, which is all in our best interests,&#8221; said Lt. j.g. Matthew Tolhurst, assistant resident officer in charge of construction.

On Friday, Tolhurst said the amount of damage at the base still is within the range given the day after the typhoon by Lt. Chris Coggins, Iwakuni&#8217;s assistant facilities officer, who said the total was between $800,000 and $1 million.

Tolhurst credited the permanently stationed contingent of Seabees in Iwakuni, as well as another Seabee unit, Naval Mobile Construction Battalion 133 &#8212; here as part of the unit deployment program, in-house maintenance personnel and maintenance support contractors for a quick response with repairs after the typhoon.

&#8220;Even now,&#8221; he said, &#8220;we are still working hard. I&#8217;d say I have minor repairs still going on at about 15 buildings. They are doing things like repairing roofs, applying patches and retiling some areas. So we have been and still are working hard to make sure things are fixed or in progress.&#8221;

The hardest-hit building on base is very old and used to house logistics department personnel. There was so much damage that Coggins had speculated that repairs might not be attempted.

&#8220;We will actually demolish the building starting in the next couple of months. A new facility will be built, but I&#8217;m not sure exactly when that will begin,&#8221; Tolhurst said Friday.

Along the Iwakuni Harbor coastline, a new concrete seawall, part of the ongoing Iwakuni Runway Relocation Project, cracked under the stress of massive, crushing waves and now leans at an estimated 45-degree angle.

Japan Defense Facilities Administration Bureau officials in Hiroshima are responsible for the cost and actual construction of the new runway, a project started in 1996.

The $1.5 billion, 8,052-foot runway is slated to be completed in 2008, a target date that has not changed even after the typhoon damage.

Other typhoon damage at the runway project site includes the upper part of a seawall that tilted and fell about 820 yards.

The typhoon also damaged utility piping on the southern breakwater and washed away four lighted buoys, which later were found, a DFAB spokesman said Thursday.

In the northern part of the project, an undersea soil corrosion barrier under the seawall was damaged, he said.

Another official said Typhoon Songda damaged the site at Iwakuni to the tune of between $4.6 million to $9.1 million.