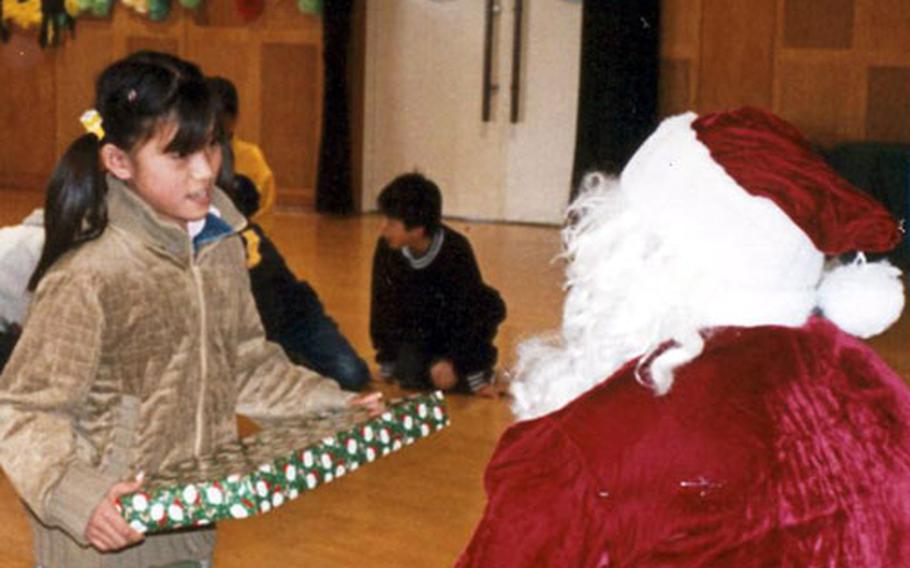 Dressed as Santa Claus, Cpl. Shane Bailey from the Marine Aviation Group 12 headquarters, and the coordinator of Toys for Tots in 2002, hands a young Japanese girl a Christmas present last year at a local orphanage. (Courtesy of Iwakuni MCAS Single Marine Program)

IWAKUNI MARINE CORPS AIR STATION, Japan &#8212; With merchants and others stretching the holiday shopping season boundaries each year, some Marines hope shoppers here are beginning to think about gifts.

Marines participating in Iwakuni&#8217;s Single Marine Program are the primary organizers and workers for the annual Toys for Tots campaign. Never mind that Halloween is still about a month away and Thanksgiving almost two. Servicemembers already are getting the word out regarding the annual charity drive even though its official launch isn&#8217;t until Nov. 30.

When that kickoff arrives, it&#8217;ll be in the form of the Thunder Run motorcycle parade, said Jay Stovall, a retired Marine and Single Marine Program director. Thunder Run will feature about 100 red and white balloon-adorned motorcycles from four local Japanese bike clubs, and another 50 or so U.S. riders. All of them, Stovall said Tuesday afternoon, will ride a course around the base following Santa Claus and his sleigh.

Toys donated must be unwrapped and new in the original packaging. Last year Iwakuni Marines collected enough toy donations to fill a racquetball court next to the Hornets&#8217; Nest, the Single Marine Program&#8217;s primary facility.

In fact, the air station community donates so many presents that &#8220;last year we started giving each child from the Japanese orphanages two toys, instead of just one. And we&#8217;re going to do the same this year,&#8221; Stovall said.

Toys for Tots is a worldwide U.S. Marine Corps Reserve program existing to collect new toys during October, November and December and distribute those toys as Christmas gifts to needy children in communities in which the campaign is conducted.

&#8220;The primary goal of Toys for Tots is to deliver ... a message of hope to needy youngsters that will motivate them to grow into responsible, productive, patriotic citizens and community leaders,&#8221; says a statement on the official Toys for Tots Web site at

Cpl. Shane Bailey, 22, of the Marine Aviation Group 12 headquarters staff, helped Stovall with Toys for Tots two years ago. He&#8217;s excited about serving as general coordinator and spokesman for the campaign for the second consecutive holiday season.

Bailey&#8217;s &#8220;militia&#8221; aside, plenty of other help also is available leading up to Dec. 24, the day Iwakuni Marines and sailors deliver the newly wrapped presents. Each gift has a name tag for a specific child based on age and gender at the six orphanages in the area.

Along with brightening the holidays for Japanese children, Stovall said, Toys for Tots volunteer work perks up servicemembers in his Single Marine Program, many longing for home during the holidays.