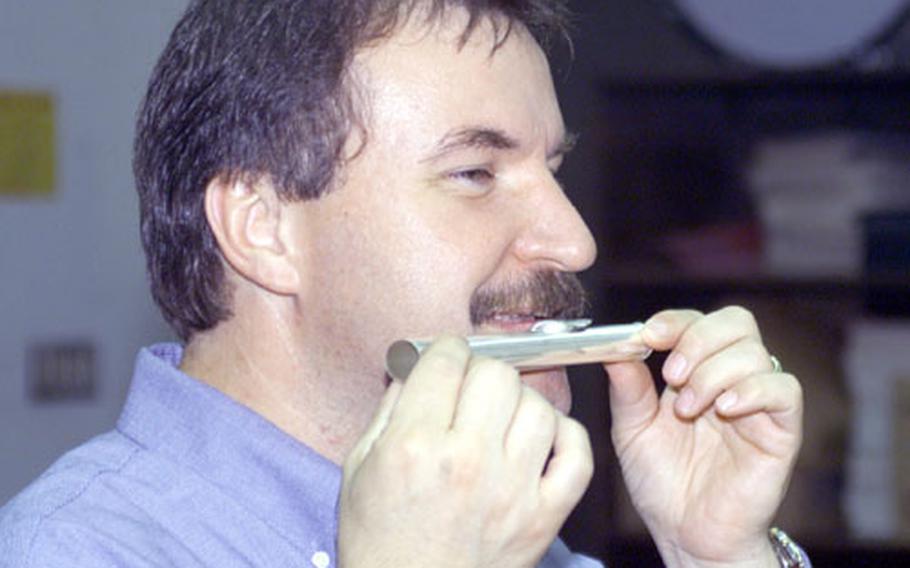 James O. Hashman, a music and video-communications teacher at Perry High, was recently designated the Department of Defense Overseas Schools Japan District Teacher of the Year.

&#8220;It&#8217;s a big honor. But as a professional, you can see your own faults, and when I think of all the fine teachers here, it makes you wonder if you are really deserving,&#8221; the 20-year classroom veteran said Friday.

Along with classroom duties, Hashman has worked to expand Perry&#8217;s instrumental and choral programs since arriving in Iwakuni in 1998 with wife Marcia and their two children.

He also serves as the faculty producer of &#8220;Samurai News,&#8221; an in-school news program anchored, reported, directed and broadcast by Perry students he trains in the use of top-shelf, digital-video equipment.

He has 16 students taking part in the news broadcasts and more than 50 percent of Perry&#8217;s small student body involved in the music program.

&#8220;Students here tend to be talented in many ways,&#8221; he said. &#8220;They participate in music, sports and other activities, so the coaches and staff here work collaboratively to schedule practices in order for all the programs to be successful.&#8221;

Hashman was born in Fukuoka on an Air Force installation and says he has a special understanding of overseas students.

He&#8217;s currently recognized in Who&#8217;s Who of American Teachers, and while in Panama, he received the Panama Canal Honorary Public Service Award for his community contributions, according to a DODDS statement announcing the Japan District Teacher of the Year.

Hashman is a positive and nurturing teacher, said students quoted in a base news report.

By making a difference in the lives of young people, the award-winning teacher said he couldn&#8217;t be happier with his chosen field.

&#8220;From my early-childhood fantasies of leading a group of musicians, to fulfilling that dream in front of my school groups, to the opportunity to stand in front of colleagues and lead meetings, I have enjoyed and continue to enjoy my lifelong journey as an educator,&#8221; he said.

Hashman is attending an awards banquet in late March in Arlington, Va. Along with other district winners, he&#8217;s now in the running for the national DODDS Teacher of the Year award, which should be announced in April, he said.