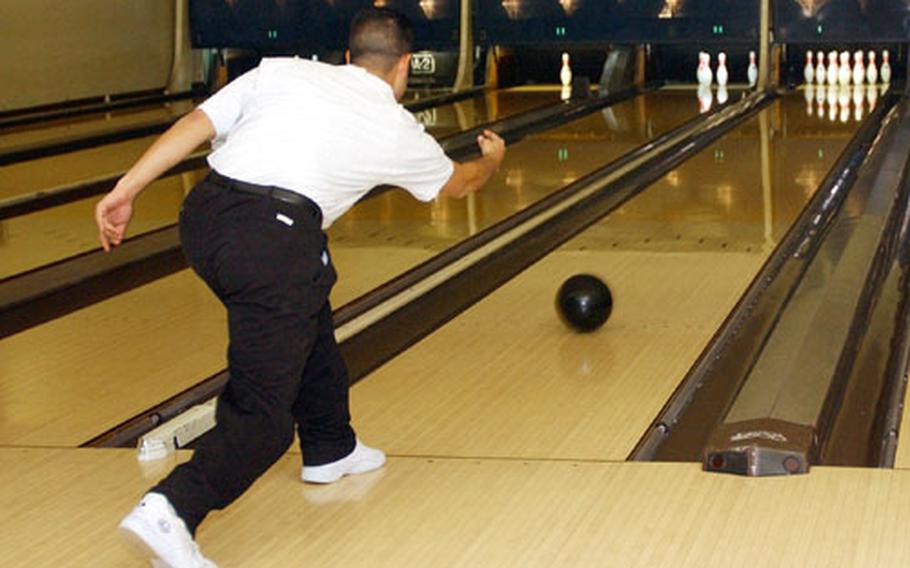 Iwakuni Marine Corps Air Station residents enjoy the evening at the Station Bowling Alley. Normal hours are until 11 p.m., but if patrons are still ready for a few more frames the bowling alley will stay open until midnight. (Courtesy of USMC)

Friday night: a day after payday and the beginning of a three-day weekend to boot. Any other time, the bars near Iwakuni Marine Corps Air Station, Japan, would be rocking and the trains headed to nearby Hiroshima, and its neon-lit party area, would be packed with Marines on liberty.

But not this weekend.

Iwakuni&#8217;s commander, Col. David Darrah, slapped a 10 p.m. to 5 a.m. curfew on base troops Tuesday after a string of recent arrests and complaints from Iwakuni City officials. He has not announced how long the curfew will remain in place. Even troops who live off base are restricted to their quarters during curfew.

Marines who spoke to Stars and Stripes on Friday night said they weren&#8217;t very happy with the curfew, but they understood the reasoning behind it.

&#8220;The thing for me is I enjoy the chance to get off base, and be my own individual, which is impossible when you are here as part of a unit. But I think it had to be done because it&#8217;s impossible for us to keep having these incidents.&#8221;

Lance Cpl. John Stinebaugh, 22, assigned to Marine Aircraft Logistics Squadron 12, said that the majority of people feeling the brunt of the curfew are not the ones who get in trouble. &#8220;All that&#8217;s changed is that there are more raucous drunks on the base now,&#8221; he said. &#8220;The barracks have become more like bars.&#8221;

He said the curfew doesn&#8217;t totally prevent him from doing things in town, but it affects spontaneous decisions.

He said he won&#8217;t bother using on-base activities and facilities that remain open after 10 p.m.

But he said he understands why the commander ordered the curfew. &#8220;This gives them time to sit back and carefully analyze the situation, and hopefully it won&#8217;t remain in place too long,&#8221; he said. &#8220;But if the curfew becomes a long-term condition, then I&#8217;d have to say the restriction is far too severe. It would absolutely be the pits.&#8221;

Local bar owners, who rely on the U.S. dollars Marines spend every weekend, are as hopeful as the Marines that the curfew won&#8217;t last very long.

He said he can understand why Darrah imposed the curfew.

Just a short stroll from Terry&#8217;s Place is California, a bar also owned by an American.

Speaking with Stripes via telephone Friday evening, and identifying himself only as Ray, he said the curfew has had little impact on his business so far.

&#8226; Iwakuni police arrested Lance Cpl. Lester E. Son, 20, Tuesday morning after he allegedly broke into an off-base home and stole more than $2,000 in cash and goods from a 52-year-old Japanese woman. A local citizen apprehended the Marine Wing Support Squadron 171 Marine. His case was referred to the Yamaguchi District Public Prosecutor&#8217;s Office for review Wednesday and he remained in police custody Friday.

&#8226; Iwakuni police arrested Cpl. Todd M. Heaney, 25, from Marine Aircraft Logistics Squadron 12, Jan. 11 and charged him with stealing nearly $5,000 in car parts from a local dealer in September. A second Marine is being questioned in connection with the case but remains free. Police say both Marines confessed to the theft. Heaney&#8217;s case was referred to the Yamaguchi District Public Prosecutor&#8217;s Office for review Tuesday and he remained in custody Friday.

&#8226; Pfc. William E. McIntosh, 22, Headquarters and Headquarters Squadron, pleaded guilty to charges of attempted rape resulting in bodily injury at the opening session of his off-base trial Thursday. He has been held in Japanese custody since Nov. 21, when he was indicted. Japanese police say McIntosh attempted to rape a 53-year-old Japanese woman on Aug. 1. McIntosh&#8217;s next trial is Feb. 5 in Iwakuni.

Plenty to do on base

Iwakuni Marine Corps Air Station officials provided the following list of base activities that are open until at least 10 p.m.