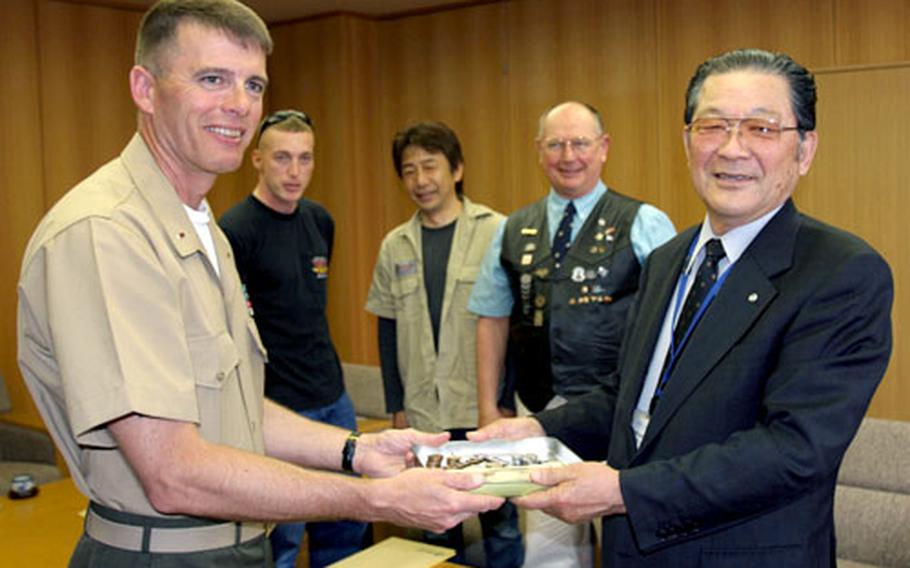 To help support the scenic roads and parks Marine Corps Air Station Iwakuni&#8217;s motorcyclists love to ride, the base Motorcycle Club used an Easter weekend gathering to raise $1,200 to donate to communities in Oshima, about an hour from the base.

On Thursday, the club gave the donation to Oshima city mayor Tomio Nakamoto.

Runyan said the club began hosting a motorcycle camp &#8212; a camping and barbeque weekend &#8212; about three years ago.

Hisao Nishimura, the owner of an off-base motorcycle parts store, suggested the group use the camp as a fundraiser. Despite rain this year, about 320 attended and many others stopped by to check out the bikes.

The club includes about 100 riders, a mixture of U.S. and Japanese servicemembers, civilians and employees. They frequently ride together with off-base clubs.

The city was so pleased with the donation and the event, Mayor Nakamoto offered to help sponsor it next year, Tippett said, adding that the donation will go to the community&#8217;s general fund, to improve facilities and recreation areas.