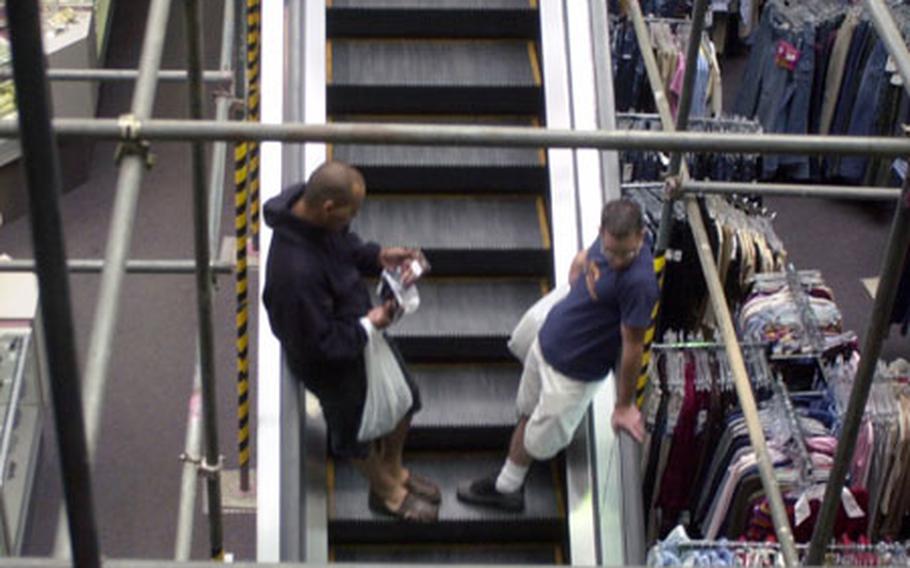 These two shoppers carry on as usual while shopping in the Marine Corps Exchange at Iwakuni Marine Corps Air Station even though indoor scaffolding surrounds them while renovations take place. (Greg Tyler / S&S)

These two shoppers carry on as usual while shopping in the Marine Corps Exchange at Iwakuni Marine Corps Air Station even though indoor scaffolding surrounds them while renovations take place. (Greg Tyler / S&S) 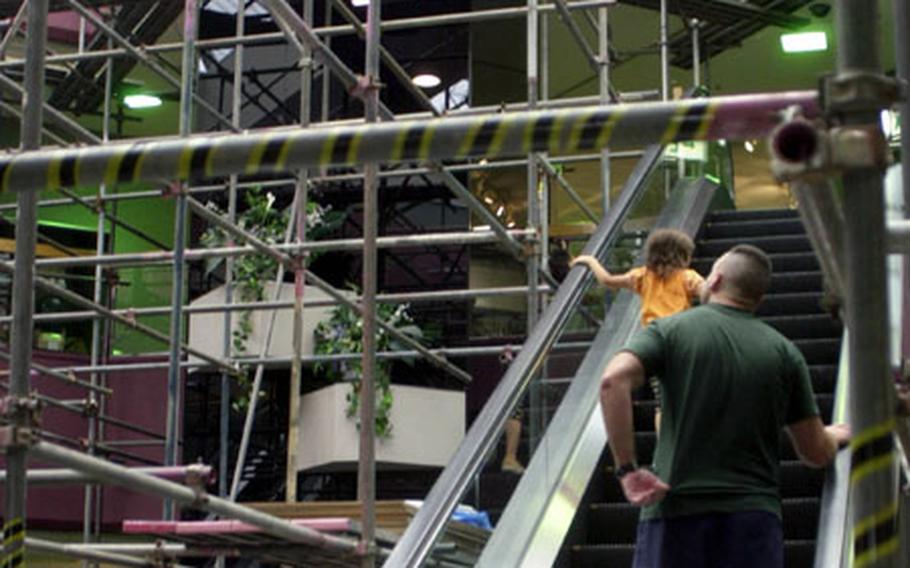 Indoor scaffolding in place while renovations take place in the Marine Corps Exchange at Iwakuni Marine Corps Air Station make a trip up or down an escalator seem a bit surreal. (Greg Tyler / S&S)

IWAKUNI MARINE CORPS AIR STATION, Japan &#8212; The Marine Corps Exchange here, the only MCX in a country outside the United States, is undergoing a $750,000 remodeling designed to create the kind of store Iwakuni customers said they want.

The impetus comes from &#8220;a couple of years&#8221; of customer surveys in which shoppers were asked what goods, brands, price ranges and services they favored, explained David Lewis, Iwakuni&#8217;s MCX head of retail.

As a result, from now until late November, the store is &#8220;getting completely remodeled, with renovations of all the departments and expanded selections throughout,&#8221; he added.

For example, Lewis said the first area set for completion is the DVD and stereo section of the electronics department. Customers of one of MCX&#8217;s more popular departments said they want to see a wider selection, &#8220;so that&#8217;s what we&#8217;re doing.&#8221;

The next department facing complete inventory and presentation upgrades is to be shoes, followed by giftware, he said, then others throughout the store. The only department that won&#8217;t be changed is the military uniform area, which has to include specific inventory, said Lewis, in Iwakuni a little more than a year.

Overall, he added, the Iwakuni MCX is increasing significantly the square footage to be used as floor shopping space for customers.

In addition, last week a separate project was completed that called for the store to be monopolized by vine-like steel scaffolding from ground to atrium ceiling.

&#8220;The scaffolding was there so we could repair the glass skylights in the atrium area ... we also added a white frosting which makes the light softer and quite attractive as it comes in, and makes the atrium more energy efficient,&#8221; Lewis added.

&#8220;But the main thing we are doing here overall is creating a greater variety,&#8221; he said, adding that customers wanting more information about the renovations and expanded stock should call DSN 253-5641 ext. 300.