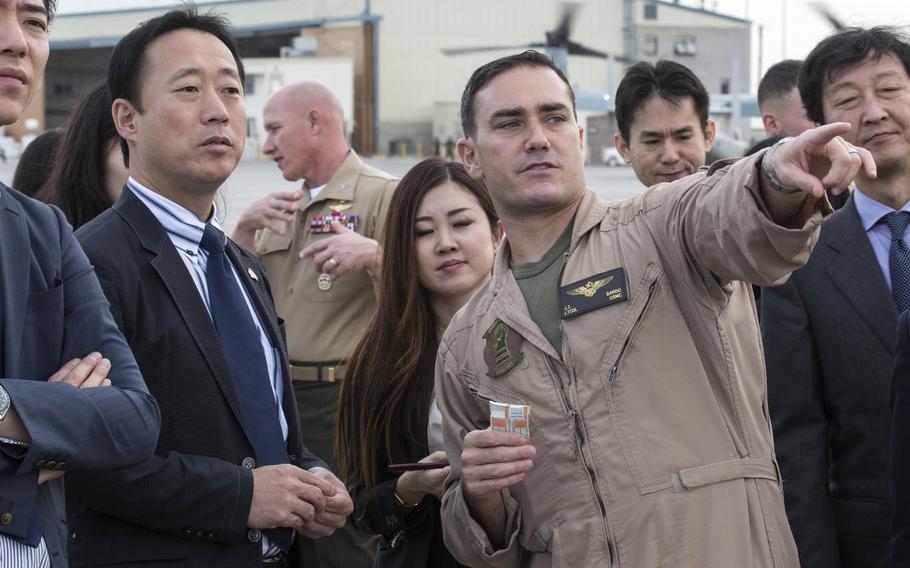 TOKYO — Citing the threat from North Korea, a Japanese mayor says he supports a bilateral agreement that will relocate the bulk of a Navy carrier air wing to Marine Corps Air Station Iwakuni, an Iwakuni City official said Friday.

Iwakuni Mayor Yoshihiko Fukuda told the city assembly he approves of the arrival of several squadrons from Carrier Air Wing 5, now based at Naval Air Facility Atsugi, closer to Tokyo.

“Everyone recognizes that the unity of the Japan-U.S. alliance is important more than ever when thinking about the security environment Japan is in, especially the circumstances involving ballistic-missile launches by North Korea,” Fukuda said.

Though the relocation was not something the city was eager to take on, the mayor said many Japanese citizens understand that “cooperation between U.S. forces and [Japan] Self-Defense Forces is necessary under the Japan-U.S. security arrangement.”

All fixed-wing aircraft squadrons are scheduled to move to Iwakuni, with two helicopter squadrons and a logistics squadron remaining at Atsugi.

The move, directed in May 2006 as part of the U.S.-Japan realignment agreement, was originally to be completed in 2014. The phased relocation will double MCAS Iwakuni’s population to approximately 10,000.

The city official said Fukuda had promised to announce his decision before the move, which will happen later this year.

The governor of Yamaguchi Prefecture and leaders from two towns surrounding the base are expected to announce their acceptance of the plan next week, Mainichi Shimbun reported.

Rear Adm. Gregory Fenton, who recently took command of Naval Forces Japan, cited the transfer of Carrier Airborne Early Warning Squadron 125 from Atsugi to Iwakuni earlier this month as evidence that the project is on track.

“Right now the U.S. and Japanese governments have agreed to a timeline of the transfer,” he said on June 16. “We’ve seen part of that executed. So, the process has initiated and we fully intend to adhere to the timelines we’ve agreed to with the government of Japan.”