Iwakuni Marines will be hoofing it to Jingle Bell Jog 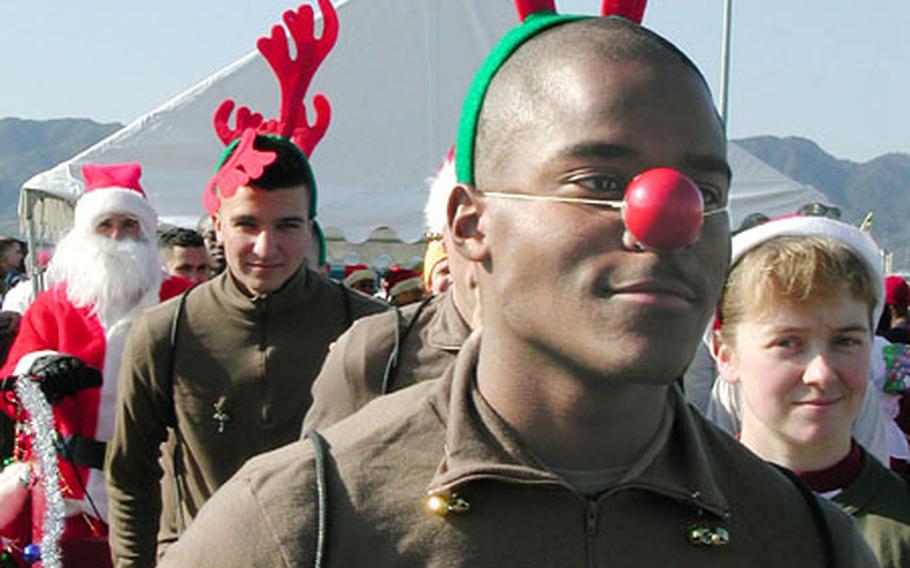 Old St. Nick (in rear, behind Marines) led the way in the 2002 Jingle Bell Jog at Iwakuni Marine Corps Air Station. Participants dress in all sorts of Christmas holiday costumes, such as these Marines, one with a big red nose, wearing felt-like reindeer antlers. This year, the event is set for Dec. 22. The lead Jingle Bell Joggers will be the National Football League&#39;s Chicago Bears Cheerleaders, the Honey Bears. (Courtesy of Iwakuni MCCS Marketing)

IWAKUNI MARINE CORPS AIR STATION, Japan &#8212; Even at the North Pole, rank apparently has its privileges.

The vehicle, otherwise used for military purposes, will be decked out like a four-wheel-drive Santa Mobile the gregarious jelly-belly keeps in his garage up north, said Bob Johnston, chief of the Iwakuni Semper Fit program.

Semper Fit and Iwakuni&#8217;s Marine Corps Community Services are sponsors of the 2003 Jingle Bell Jog, which is becoming a traditional holiday event at the base about 32 miles southwest of Hiroshima.

A few years ago, Johnston took part in a similar event at another installation. Deciding that a few adjustments could make it a hit at Iwakuni too, he began to tweak the event&#8217;s activities and seriously turned up the heat on advertising and marketing.

As do Marines almost everywhere, this air station&#8217;s servicemembers sport tightly trimmed hairstyles (or no hair at all) and uniforms as sharply creased as their behavior is straight-laced. That&#8217;s part of what makes the Jingle Bell Jog fun, Johnston indicated: How often do you get to see a Marine gunnery sergeant letting his inner elf out to play?

&#8220;One guy came last year dressed as a big box, or Christmas present, all wrapped just like a gift under a Christmas tree,&#8221; the Semper Fit chief said. &#8220;So they can run, walk, jog or whatever they can do based on the limitations of the costumes they wear.&#8221;

The course begins at the IronWorks Gymnasium and moves toward the base&#8217;s Armed Forces Network facility, then to the commissary and post office, past the air station Headquarters and back to the IronWorks Gym, according to information provided by event organizer Billie Scott, MCCS&#8217;s Semper Fit health promotions director.

Another big attraction &#8212; possibly the main attraction to those with XY chromosomes &#8212; is the promised presence of the Honey Bears, the professional cheerleaders for the Chicago Bears of the National Football League&#8217;s NFC North Division.

Associated events include kids&#8217; games, inflatable toys, a football wreath toss, a free-throw challenge for people wearing vision-distorting &#8220;drunken driving&#8221; glasses and awards for the best-dressed individuals and units or groups. All events are open to base personnel.

Registration for the 2K jog lasts from 10 a.m. to 10:45 a.m. at the IronWorks Gym, followed by the cast of holiday characters jogging at 11 a.m.

&#8220;The main thing we want to do is help usher in the Christmas holiday and show the people the appreciation we at Semper Fit have towards the community,&#8221; Johnston said.