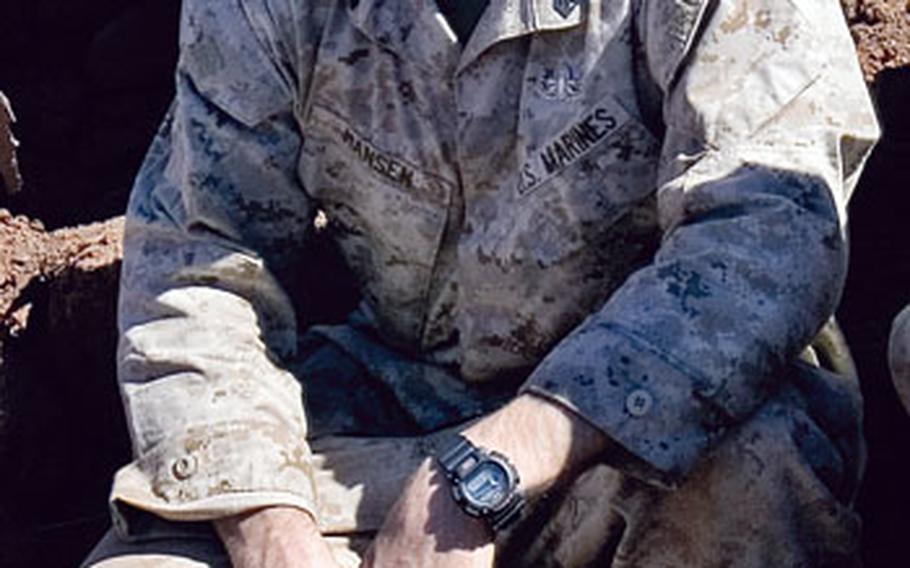 Staff Sgt. Daniel Hansen trains for explosive ordnance disposal during an exercise in Australia in August. Hansen was killed on Feb. 14 while deployed to western Afghanistan. (Joseph Marianelli/Courtesy of the U.S. Marine Corps)

A Marine based in Iwakuni, Japan, was killed Feb. 14 while deployed in Afghanistan, the Department of Defense announced this week.

Staff Sgt. Daniel L. Hansen, 24, of Tracy, Calif., died while supporting combat operations in Farah province, according to the DOD. He was assigned to Marine Wing Support Squadron 171 with the III Marine Expeditionary Force, which is based at Marine Corps Air Station Iwakuni in western Japan.

Hansen was part of an explosive ordnance disposal team. His family said the Marine was killed by a roadside bomb, according to his hometown newspaper.

"He was always willing to learn, and I tried to teach him all I could," said Staff Sgt. Aron Cheatham, who is on the same EOD team with MWSS 171 at Iwakuni. "I never had a problem with giving him a task. &#8230; He was a good tech."

Cheatham said Hansen was sent to Afghanistan as an individual augmentee, and the unit received reports that his work there "really shined."

A funeral service was scheduled for 2 p.m. Friday at the air station chapel, Canedo said.

Hansen, who was engaged to be married, joined the Marine Corps after graduating from high school in 2002, the Tracy Press reported.

His twin brother and fellow Marine, Matthew Hansen, told the newspaper that Daniel Hansen had clearance to cover former President George W. Bush at Camp David and had been handpicked to guard two generals during a deployment to Fallujah, Iraq.

Hansen deployed to western Afghanistan in October to work EOD. Fighting has intensified over the past year as the United States begins to shift its military focus back to the region.

Hansen is the second servicemember from Iwakuni killed in Afghanistan in the last six months.

Petty Officer 3rd Class Eichmann A. Strickland, 23, of Arlington, Wash., died Sept. 9 from injuries suffered when the vehicle he was driving hit an improvised explosive device in Afghanya Valley.

Strickland was assigned to Combat Service Support Detachment 36 and was deployed as a member of an embedded training team.