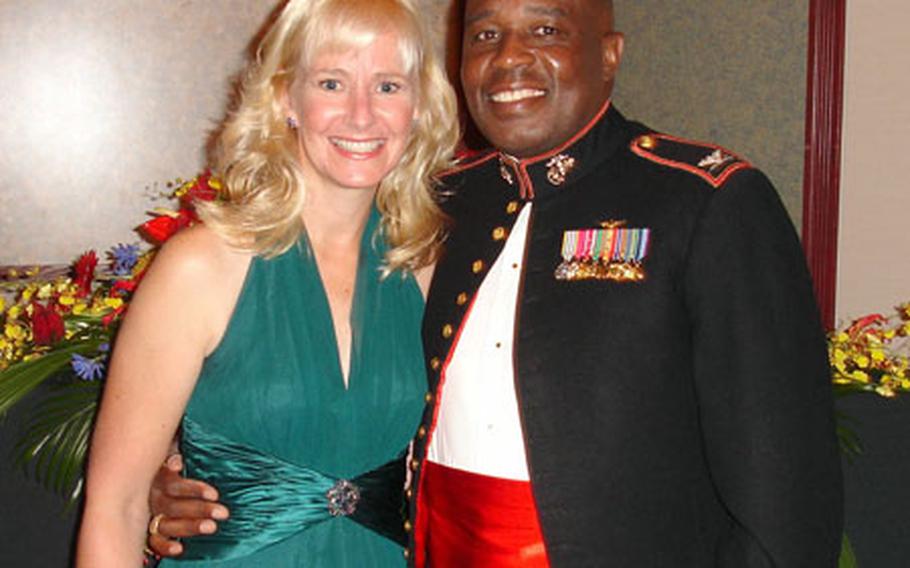 It may seem like a very bad idea to spill coffee on a Marine colonel while he&#8217;s wearing a white sweater.

But for Lisa Dyer, that mishap six years ago led to love, marriage and a new life within the U.S. military.

&#8220;I was scared of the whole Marine thing,&#8221; Dyer said, remembering how that chance encounter on a plane from Chicago to Colorado grew into a long-distance correspondence with Michael Dyer, now the base commander of Marine Corps Air Station Iwakuni.

She&#8217;s experienced the moves, first to Colorado Springs, then to Okinawa and now Iwakuni, all in the past five years. She admits to the frustrations of living in the fishbowl environment on a base, where everyone knows everyone and all eyes are on the commander and his wife.

But most of all, she says, her new life has brought her a personal appreciation of the military&#8217;s work around the world. She&#8217;s hosted friends and family at military bases, met war veterans from other countries and known friends and colleagues who have died in conflict.

The book grew out of a collection of e-mails she sent home to friends and family during the new couple&#8217;s first overseas assignment together on Okinawa. Dyer, a former medical conference coordinator who grew up in suburban Illinois, wrote home once a week about her new life in Japan and on a military base.

Her friends and family suggested she turn the letters into something more. Last spring, she self-published &#8220;Spilled Coffee&#8221; at Lulu, an online publisher. The book can be ordered from Lulu.com, and a copy is available at Iwakuni&#8217;s library.

Dyer says she avoided offering advice in the book, though she&#8217;s met many spouses who married servicemembers without a primer to guide them through the transition. For her, the key is being open and inquisitive about the lifestyle.