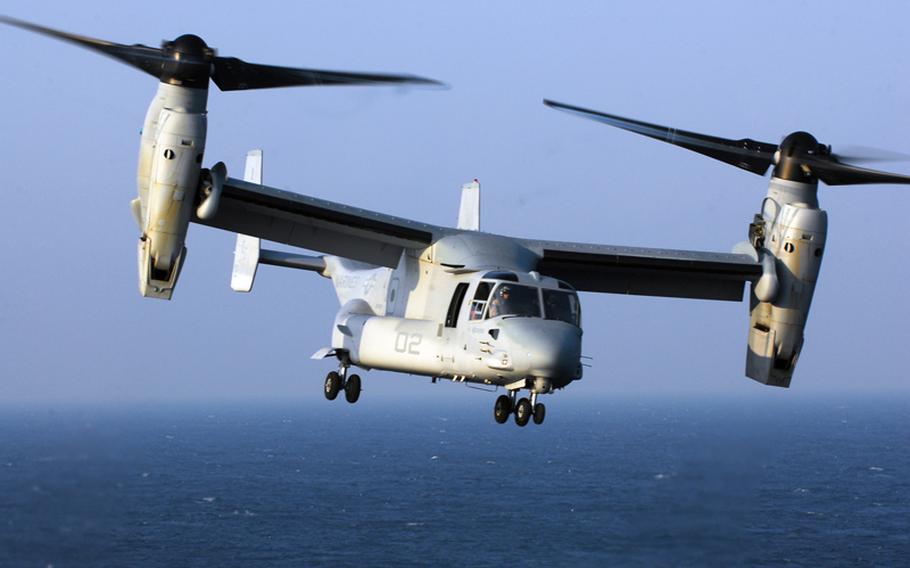 A V-22 Osprey aircraft takes off from the multi-purpose amphibious assault ship USS Bataan in the Atlantic Ocean. The Marines have announced the Ospreys would deploy to Okinawa in the next few years, but recent media report suggest the aircraft could be bound for mainland Japan instead. (U.S. Navy)

CAMP FOSTER, Okinawa &mdash; The city of Iwakuni said Thursday it does not want to host a fleet of U.S. Marine Corps V-22 Ospreys that are supposed to be deployed to Okinawa in the next few years.

The Marine Corps announced last summer that the Ospreys would replace a fleet of Vietnam-era helicopters on Okinawa, but the Japanese news service Kyodo reported this week that the U.S. and Japan governments are now considering locating the new aircraft on mainland Japan at Marine Corps Air Station Iwakuni, near Hiroshima, or possibly at Camp Fuji in Shizuoka prefecture instead.

An Iwakuni spokesman did not elaborate on the city&rsquo;s reasons for opposing the possible deployment of the Marine Corps aircraft, but Okinawa residents have argued that the twin tilt-rotor Ospreys might be unsafe and noisy.

Iwakuni Mayor Yoshihiko Fukuda said he feels &ldquo;uncomfortable&rdquo; about any plan to locate Ospreys there and would oppose it for now, according to the city spokesman.

Meanwhile, the city is checking with the Japanese government to confirm the media report that the plan was discussed in Tokyo last month.

Japan&rsquo;s Ministry of Defense denied any such discussions, saying the proposed deployment was never part of high-level U.S.-Japan talks in February that included negotiations on moving Okinawa Marines to Guam.

&ldquo;There is no such fact&rdquo; that it is under consideration, spokesman Takaaki Ono said. &ldquo;The detail of the deployment of the aircraft to Japan is still being reviewed by the U.S. side, including how many and to where, as well as data on noise and safety.&rdquo;

The Marine Corps said this week it is finishing up a comprehensive environmental impact and noise study on moving Ospreys to Okinawa and will turn the data over to the Japanese government when it is completed, which will likely be sometime in April.

The service plans to begin sending Ospreys to Marine Corps Air Station Futenma in 2012 or 2013 as part of a worldwide effort to upgrade the Sea Knight dual-rotor helicopter, which was originally fielded in the early 1960s.

The Osprey, which can take off like a helicopter and fly like an airplane, had a rocky development period that included at least two deadly crashes more than a decade ago. But according to Naval Air Systems Command and the Naval Safety Center, it has racked up the lowest number of severe aviation incidents of any Marine Corps aircraft in the past 10 years and recently passed 100,000 hours of flight time after being deployed to Iraq in 2007 and later to Afghanistan.

Soon after the Marine Corps&rsquo; plan was announced, Okinawa lawmakers filed a formal protest with the U.S. military and the consulate, claiming the Osprey is &ldquo;dangerous&rdquo; and &ldquo;defective&rdquo; and would exacerbate air traffic noise complaints at Futenma.

The island&rsquo;s prefectural assembly unanimously passed a resolution asking the U.S. to abandon the Osprey plans.