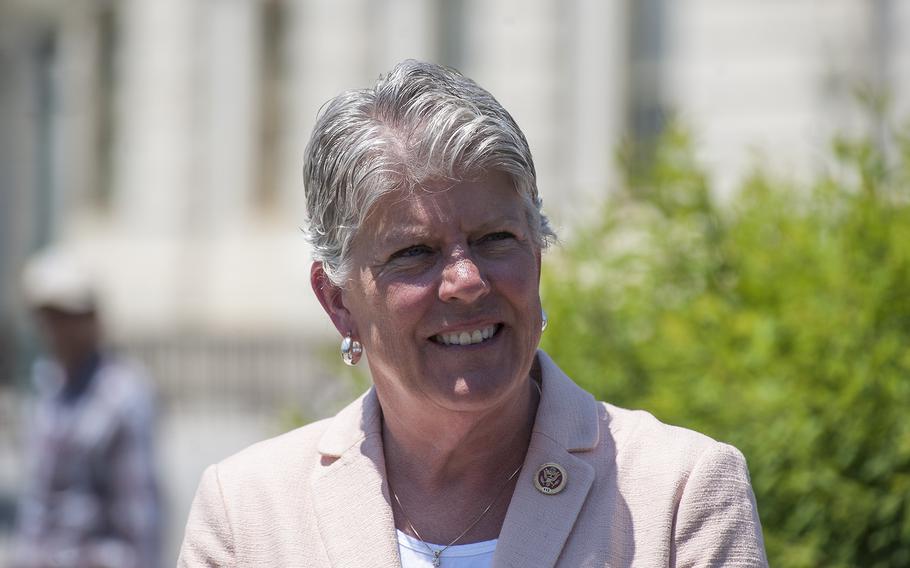 Rep. Julia Brownley, D-Calif., takes part in a May 17, 2017, event outside the Capitol. Brownley, who helped introduce a measure included in the House’s new VA funding bill that would extend VA’s coverage of in vitro fertilization costs through 2019, said “We owe our veterans who have suffered reproductive injuries the ability to fulfill their dream of raising a family of their own.” (Carlos Bongioanni/Stars and Stripes)

WASHINGTON – A Department of Veterans Affairs funding bill sent to the House this week includes a measure extending coverage for fertilization treatments or adoption services for wounded veterans wanting to start families.

Despite opposition from conservatives, Congress passed a measure last September allowing the VA to cover in vitro fertilization costs – but with limitations. The action lifted a 24-year ban on VA coverage of IVF, but only temporarily, until the end of fiscal 2018.

The measure included in the House’s new VA funding bill would extend VA’s coverage of the costs through 2019.

“We owe our veterans who have suffered reproductive injuries the ability to fulfill their dream of raising a family of their own,” said Rep. Julia Brownley, D-Calif., who helped introduce the measure. “I am pleased this bill maintains VA coverage for assisted reproductive technology and adoption services, and I will continue to work with my colleagues to ensure that these services are permanently available to our nation’s veterans and their families.”

The House Appropriations Committee sent its VA and military construction budget to the full House on Thursday. It provides more than $182 billion for the VA, a 5 percent increase from fiscal 2017, but still approximately $500 million less than the White House requested in its spending proposal.

It’s the first funding bill to go to the full House, but it’s still months behind schedule because of President Donald Trump’s late-May release of his budget proposal.

The bill does not assign a specific dollar amount to IVF coverage, but states money appropriated for medical services can be used to provide fertility counseling and treatment to veterans and spouses, or to reimburse veterans who adopted a child.

Rep. Rick Larsen, D-Wash., who worked with Brownley to include the IVF provision, called it a “small, but important step toward permanently guaranteeing veterans access to fertility coverage.” He and Brownley want to see the 24-year ban struck down altogether.

Brownley’s office said a single IVF treatment can cost about $12,000.

Because of the use of improvised explosive devices against U.S. forces in Iraq and Afghanistan, thousands of servicemembers have suffered traumatic wounds to their genitals and spines, leaving them unable to procreate. Before the measure was put in place at the VA last year, those veterans were left with little coverage options for the costly IVF treatments.

In written testimony this week, Paralyzed Veterans of America said an estimated 500 servicemembers would take advantage of the VA’s coverage of IVF in fiscal 2018, at a cost of up to $20 million. The group is recommending $20 million specifically be set aside for the treatments in the fiscal 2018 budget.

The funding bill hasn’t yet been scheduled for a vote in the House. A VA funding bill must also still work through the Senate.