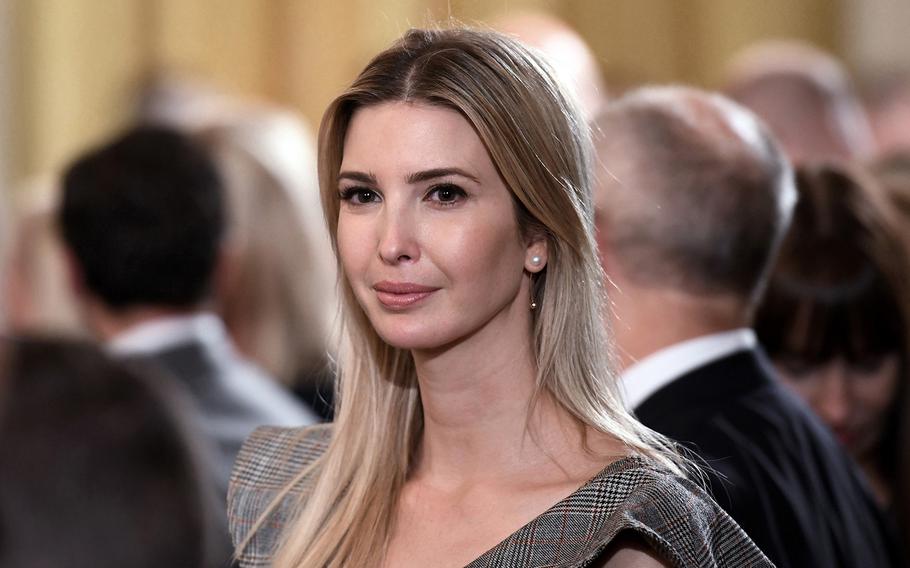 Ivanka Trump on October 26, 2017, in the East Room of the White House in Washington, D.C. (Olivier Douliery/TNS)

SEOUL, South Korea — North Korea will send a high-level delegation led by a former spymaster to the Olympics closing ceremony on Sunday, raising speculation about the possibility of a meeting with Ivanka Trump, who will also be in the audience.

The announcement was the latest in a whirlwind of diplomatic developments set off by North Korea’s agreement to participate in the Feb. 9-25 Winter Games, which are being held in the South Korean alpine town of Pyeongchang.

South Korean officials have expressed hope they could extend the Olympics detente to bring all sides to the table in a bid to ease months of tensions over the North’s nuclear weapons program. But critics accuse the North of waging a charm offensive aimed at easing punishing economic sanctions and diplomatic pressure against it.

They will travel to South Korea by rail ahead of the ceremony on Sunday and will stay for three days, the ministry said in a statement.

That may bring them face to face with President Donald Trump’s daughter, a 36-year-old fashion designer and former model who serves as one of his senior advisers.

Unification Minister Cho Myoung-gyon told lawmakers on Thursday that it’s too early to predict whether the U.S. and North Koreans will meet on the sidelines of the Olympics.

“But the government will make efforts to lead the U.S. and North Korea to open dialogue,” Cho was quoted as saying by the Yonhap News Agency.

Another government official said on condition of anonymity that a meeting between the U.S. and North Korean delegations on the sidelines of the closing ceremony looks unlikely.

Vice President Mike Pence led the U.S. delegation to the opening ceremony in what the administration called an effort to offset what it called a “propaganda charade” by the North Korean delegation, which was led by leader Kim Jong Un’s sister.

His office said earlier this week that Pence had planned to meet with the North Koreans, but they canceled at the last minute after the vice president made clear he would maintain a hard line on U.S. demands that the communist state abandon its nuclear weapons program.

Pence drove home that point in the days leading to the ceremony, meeting with North Korean defectors and condemning the North’s record of human rights abuses. He also remained seated even as the rest of the crowd stood and cheered as athletes from the two Koreas marched together into the stadium.

President Donald Trump’s daughter, who also serves as one of his advisers, will be joined by White House press secretary Sarah Huckabee Sanders and Allison Hooker, a National Security Council official who is a Korean specialist.

Administration officials have said Ivanka Trump has no plans to meet with the North Koreans and the purpose of her trip is to cheer on American athletes and reaffirm the U.S.-South Korean alliance.

Still her visit has drawn inevitable comparisons to the North Korean leader’s sister, Kim Yo Jong, who was dubbed “North Korea’s Ivanka Trump” by the South Korean media and delivered an invitation from her brother for Moon to visit the North.

He noted the North Korean officials coming to the closing ceremony don’t have the direct line to Kim Jong Un enjoyed by his younger sister and the acting head of state who accompanied her.

“That team was better configured for a conversation with Pence, whereas looking at the team they’re sending now, they’re really coming to talk to the South Koreans,” he said. “Unless the North Korean delegation changes, they don’t look set up to interact with Ivanka Trump.”

Kim Yong Chol, a general and former chief of the military intelligence agency, has been blacklisted by Washington and Seoul in unilateral sanctions.

He is suspected of having orchestrated several attacks on South Korea in past years, including the deadly sinking of the South Korean Cheonan warship and the shelling of Yeonpyeong Island in 2010.

South Korea’s Unification Ministry said it accepted the delegation’s visit “to help advance the process of settling peace on the Korean Peninsula including the improvement of inter-Korean relations and denuclearization.”