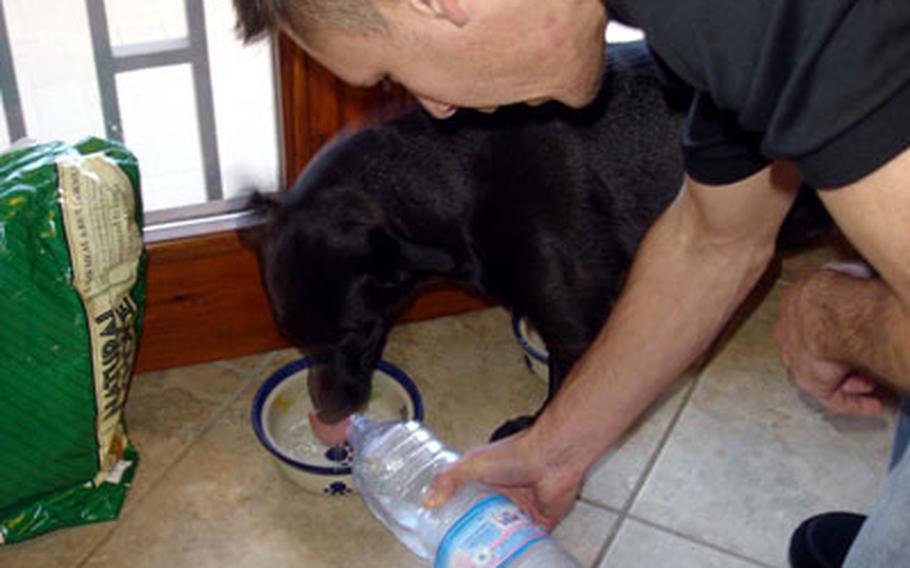 Petty Officer 2nd Class Nate Green, a resident of Lago Patria, doesn’t even let his dog Jack drink the water that comes out of the tap. (Lisa M. Novak / S&S)

Petty Officer 2nd Class Nate Green, a resident of Lago Patria, doesn’t even let his dog Jack drink the water that comes out of the tap. (Lisa M. Novak / S&S) 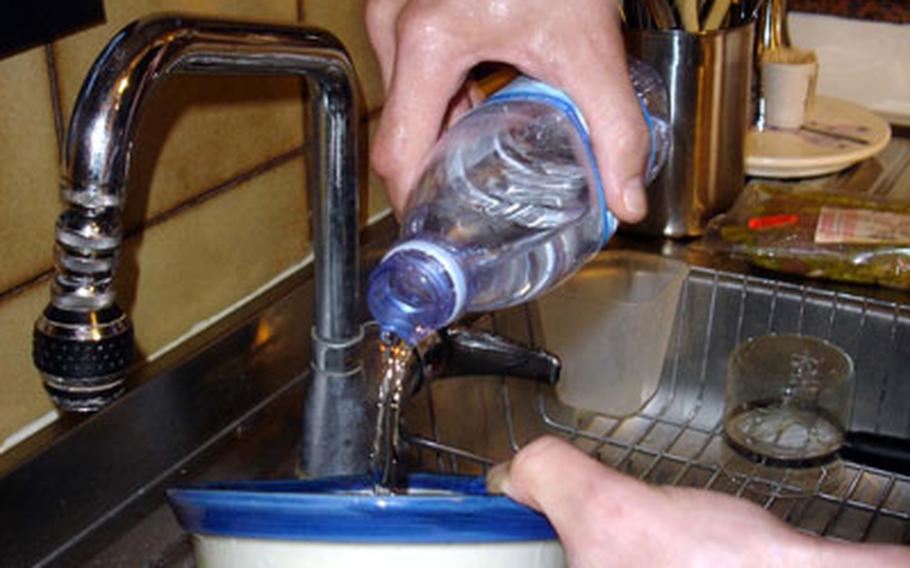 NAPLES, Italy &#8212; Since moving to the Naples suburb of Lago Patria last year, Nate and Shawnie Green have spent more than $1,000 on bottled water. No, they&#8217;re not training for a marathon. They just don&#8217;t trust what comes out of the tap.

The Greens aren&#8217;t the only ones concerned with water quality in Naples. At a base town hall meeting in January, several servicemembers, civilians and family members raised numerous concerns about it.

Officials periodically test water sources and distribution systems that supply bases at Capodichino, Gaeta and Gricignano. Minimal amounts of contaminants such as nitrates, barium and antimony have shown up, all within allowable levels set by the Final Governing Standards, which define environmental compliance at overseas installations, according to Navy officials.

Starting on March 31, results of the tests, conducted by Naval Facilities Engineering Command Europe, were posted on the command Web site, www.nsa.naples.navy.mil/ environmental/index.htm. The most recent were taken in 2007.

&#8220;We really hope everyone reads the CCRs [Consumer Confidence Reports],&#8221; said Kelly Burdick, NAVFAC spokeswoman. &#8220;This will be very helpful in understanding the water quality as the Naples Public Health Assessment progresses.&#8221;

The health assessment began in February, with representatives from the Navy and Marine Corps Public Health Center in Virginia meeting with Italian officials in Naples to review existing data and request new studies.

Testing isn&#8217;t currently done at the Navy&#8217;s Receiver Site facility in Lago Patria because with only about 30 individuals working there, the facility is too small to be considered a public water distribution system, said NAVFAC officials.

But testing at that location was done in 2005, which showed excessive amounts of lead in the water, according to an internal memo and document obtained by Stars and Stripes. At the time the water was considered nonpotable, and the Navy supplied bottled water for cooking and drinking, according to the document.

NAVFAC has since discounted those results, saying the testing procedures were not followed correctly, Burdick said.

For now, the Navy testing only applies to those who live and work on the bases &#8212; not for the thousands living on the economy.

At the January town hall meeting, base commander Capt. Floyd Hehe said residents of houses supplied by well water, as opposed to city water, should have the water tested periodically.

The housing office said they just started adding that information to their database last month.

&#8220;We now ask the landlords whether a rental property utilizes water from a public water system, private well water, or both,&#8221; said Sandra Randolph, housing director for Naval Support Activities Naples. &#8220;As we receive this information, our housing database is being updated accordingly.&#8221;

NAVFAC officials say they&#8217;re not set up to perform individual tests on drinking water for residents living off base. But it may start to test water systems from houses on the economy, Burdick said.