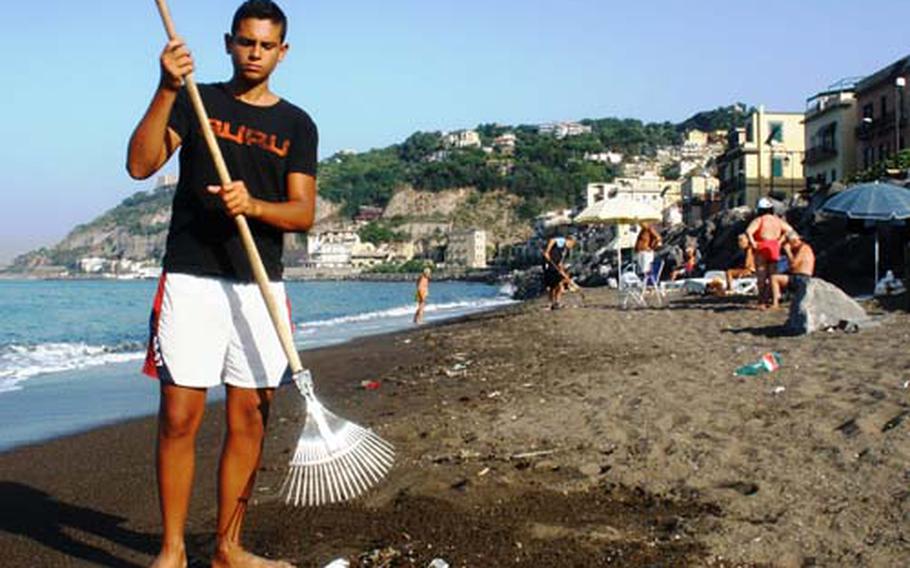 Each morning during the summer months, Rosario Calise, 15, cleans up a beach in Bagnoli, Italy. Recent news of polluted regional waters has depleted the throngs of sunbathers who usually show up, he said, though there are still a few dedicated beachgoers who turn out. (Sandra Jontz/ S&S)

NAPLES, Italy &#8212; Summer is in full swing, but the once-popular beaches in southern Italy are jarringly vacant.

That&#8217;s because of repeated warnings of higher-than-acceptable bacteria levels that have polluted more than 37 miles of coastline in the Campania region, prompting regional environmental officials to declare the ocean off-limits to swimmers.

One Italian beach regular, Vitalle Luongo, 70, said the beach he was relaxing on had been declared off-limits, although there were no visible warnings. He took issue with the advisories that have been issued.

"I&#8217;ve been coming here since I was 10, and never, not once, has it hurt me," he said Thursday morning while seated in a rickety folding chair on a sandy beach in the seaside resort town of Bagnoli.

According to the Agenzia Regionale per la Protezione Ambientale della Campania, the regional equivalent to the U.S. Environmental Protection Agency, biweekly tests of the regional waters have turned up higher-than-acceptable levels of total coliform, fecal coliform and fecal streptococci bacteria, the latter of which can cause strep throat, flesh-eating disease and a variety of other infections.

Total coliform bacteria occur naturally in the environment and are generally harmless. Fecal coliform bacteria typically are found in the intestinal tract of warm-blooded animals, including humans. The presence of fecal coliform in the water is a strong indication of recent sewage or animal waste contamination, according to the national Centers for Disease Control and Prevention.

The U.S. Naval Hospital Naples reported that no one has sought medical treatment related to beach visits, base spokesman Lt. Paul Macapagal said.

Italian media outlets have reported some beaches have been plagued recently with worms and sand fleas. High contamination levels have been recorded in Mondragone, Castelvolturno, Licola, Pozzuoli, Portici, Castellammare di Stabia and along the Salerno coastline.

Levels of fecal coliform registered in waters between Lido le Ancore and the NATO beach in Giugliano in Campania, for example, were 1,200 times more than the Italian maximum contaminate level, according to testing documents posted on ARPAC&#8217;s Web site. The pollution is caused by illegal dumping of sewage and inefficient water purification plants, agency officials have said.

The 37 miles of coastline have been off-limits since April. While a recent shutdown of a water purification plant in Cuma because of an employee strike has increased the unacceptable levels of the bacteria, it has not increased the number of beaches that are off-limits, according to an ARPAC official.

Italian investigators are probing reports of toxic dumping of untreated water along the Phlegean coastline west of Naples by the plant, according to several Italian news agencies.