Animal activists team with and Italian health officials to load some of 51 shelter dogs seized Friday into a truck, which would take them to other Naples-area shelters. The shelter was shut down Friday after a court injunction on charges of cruelty to animals. (Sandra Jontz / S&S)

Animal activists team with and Italian health officials to load some of 51 shelter dogs seized Friday into a truck, which would take them to other Naples-area shelters. The shelter was shut down Friday after a court injunction on charges of cruelty to animals. (Sandra Jontz / S&S) This damaged and unsafe pen is but one example of the poor conditions dogs at a Castelvultorno animal shelter lived in. The shelter was shut down Friday, and the 51 dogs taken to other Naples-area shelters. (Sandra Jontz / S&S) 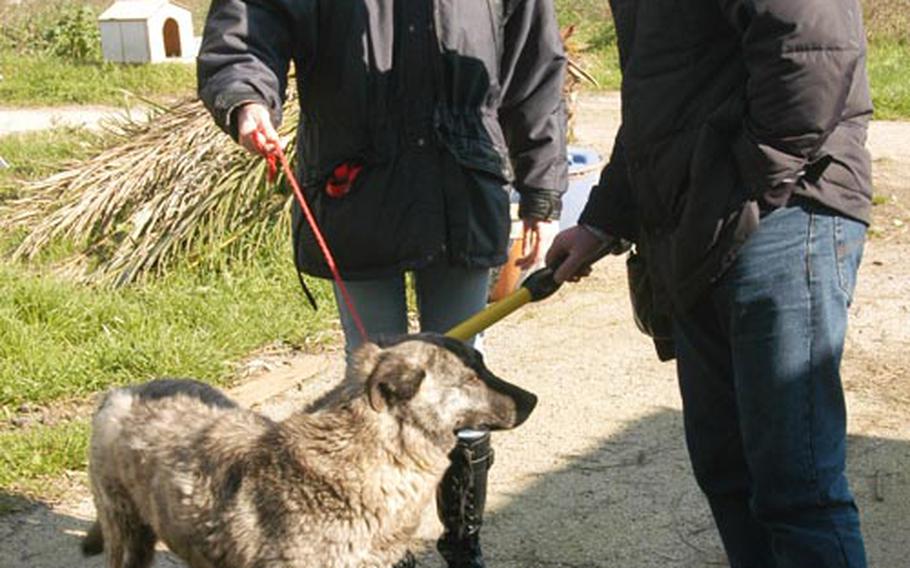 Salvatore De Micco, an official with Naples&#39; health department, scans a shelter dog to read its microchip. Animal Activists, some of whom are spouses of military members stationed at NATO’s Allied Joint Force Command or the U.S. Navy base, have worked to make sure all the dogs at the shelter were neutered and micro chipped so they could be taken to other area shelters. (Sandra Jontz / S&S)

CASTELVOLTURNO, Italy &#8212; Italian health officials, flanked by animal activists, raided and shut down an animal shelter Friday that officials said was being run in a substandard manner.

Those who went on the raid, which was prompted by animal rights activists&#8217; concerns, found several dogs with untreated broken limbs and shelter pens littered with feces.

Four of the 51 dogs were adopted by members of the Animals Without Limits foundation group after the raid, and the rest went to two other shelters near Naples.

"This is such a happy day for me," said group founder Mia Mattsson-Mercer, who in 1999 started the organization to rescue and treat stray dogs in war-torn countries. She later established the group in Naples, not war-torn "unless, sometimes, you&#8217;re unlucky enough to be born a dog, and born free," said Mattsson-Mercer, whose husband is stationed at Allied Joint Force Command Naples. The couple has a brood of rescued dogs at home.

The shelter in Castelvolturno, which had no official name, is one of numerous facilities, both public and private, in the Campania region that has substandard conditions, activist Stella Cervasio said.

Friday&#8217;s raid was the third time authorities censured the woman who ran the Castelvolturno shelter.

"She&#8217;ll just move and start somewhere else," Cervasio said, shaking her head. Some shelter operators round up as many dogs as possible, cramming them into cages to collect cash from the local, state and federal governments that fund publicly run shelters.

Operators of public shelters are paid roughly 4 or 5 euros per day, per dog by the government, according to Mariana Pompameo, director of the Veterinarian Hospital for Azienda Sanitaria Locale Napoli 1. Pompameo said there is adequate oversight of the publicly funded shelters, including quality-control visits.

Animals Without Limits treats stray animals, using donated funds for medicine and supplies. Italian law prohibits euthanizing healthy animals, so clinics and organizations spay or neuter them, and either return the strays where they were found, or adopt them out.

Four dogs seized in Friday&#8217;s raid &#8212; Ariel, Nebbia, Clara and Bella &#8212; were adopted by two Animals Without Limits foundation activists. For more information on the group, go to: www.animalswithoutlimits.com.