Buy Photo
The personnel alert holding area at Aviano Air Base, Italy, is a busy place when the 173rd Airborne Brigade comes to gear up for a jump. (Kent Harris/Stars and Stripes)

Buy Photo
The personnel alert holding area at Aviano Air Base, Italy, is a busy place when the 173rd Airborne Brigade comes to gear up for a jump. (Kent Harris/Stars and Stripes) 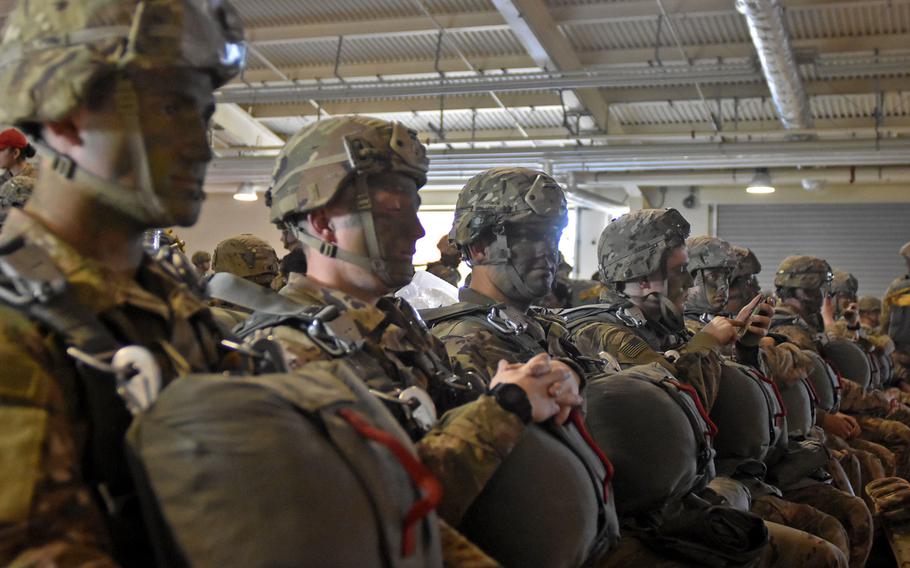 Buy Photo
Soldiers from the 173rd Airborne Brigade enter the "wait" portion of "hurry up and wait" while in the personnel alert holding area at Aviano Air Base, Italy on Wednesday, Nov. 14, 2018. (Kent Harris/Stars and Stripes) 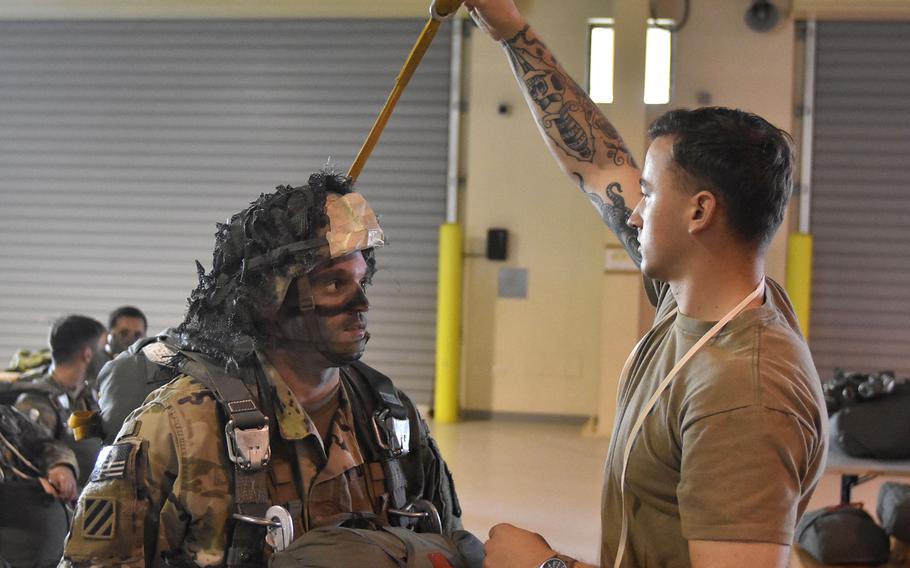 Buy Photo
Soldiers from the 173rd Airborne Brigade, sporting between 70 and 90 pounds of gear, waddle out to a C-130J Hercules at Aviano Air Base, Italy, on Thursday, Nov. 15, 2018. (Kent Harris/Stars and Stripes) 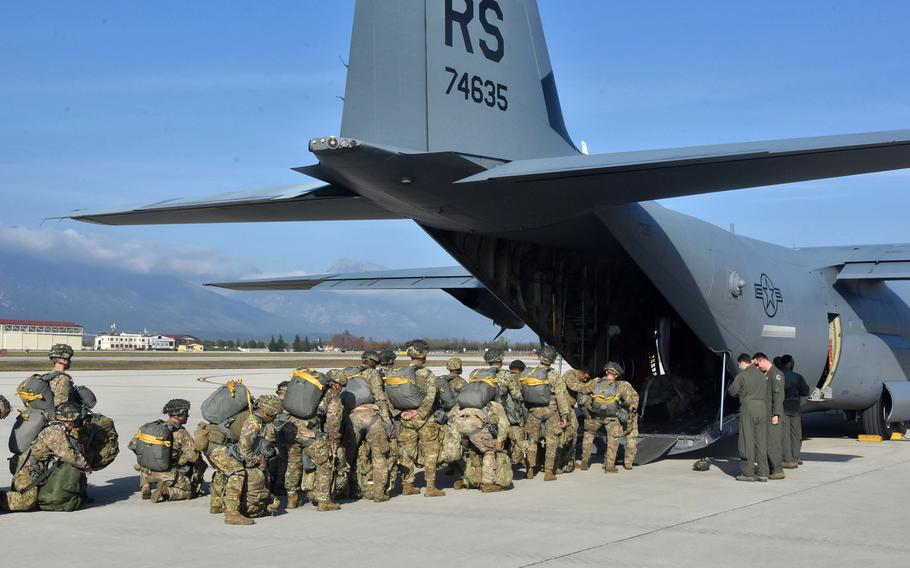 Buy Photo
Soldiers from the 173rd Airborne Brigade get set to board a C-130J Hercules from the 86th Airlift Wing before jumping into France on Thursday, Nov. 15, 2018. (Kent Harris/Stars and Stripes) 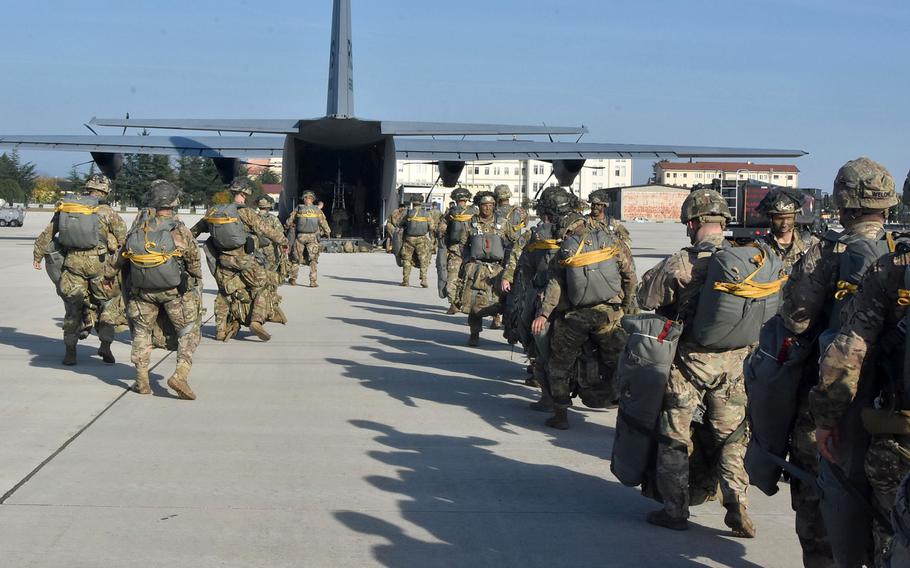 Buy Photo
Soldiers from the 173rd Airborne Brigade form two lines - one for each side of the awaiting C-130J Hercules at Aviano Air Base, Italy, on Thursday, Nov. 15, 2018. (Kent Harris/Stars and Stripes)

VICENZA, Italy — The 173rd Airborne Brigade is getting a little help from its friends for the first time in years.

U.S. Army Garrison Italy took over the logistical intricacies of getting hundreds of paratroopers from Caserma Ederle onto planes Wednesday to Aviano Air Base for exercises in southern France.

The logistics part is significant and was a distraction from mission imperatives, he said. “The garrison really should be doing that,” Berdy said.

The move — aimed to test and improve capabilities along with the brigade for projecting power over distances — comes as the Army focuses anew on whether troops are equipped and trained to deploy quickly and effectively after more than a decade of rotational deployments to battle insurgents Iraq and Afghanistan.

“The idea is making sure they can get where they need to be ... as frictionless as possible. It’s the crawl, walk, run methodology,” he said.

The brigade, the U.S. Army’s quick reaction force in Europe, determined last year in a self-assessment that if called to rapidly counter Russian aggression it lacked “essential capabilities needed to accomplish its mission effectively and with decisive speed,” according to Politico, which obtained a copy of the report.

“The faster we can get people in — that gives our political leaders some options,” then-U.S. Army Europe commander Lt. Gen Ben Hodges said during a 2016 NATO exercise in Spain. “That’s the most important thing: speed gives political leaders options.”

The exercise coincided with a report released by the independent bipartisan Commission on the National Defense Strategy which warned that “America’s longstanding military advantages have diminished,” and that “doubts about America’s ability to deter and, if necessary, defeat opponents and honor its global commitments have proliferated.”

This week’s war game is the beginning of larger and more complex exercises that will culminate next spring, said Berdy, formerly with the 173rd. Brigade commander Col. James Bartholomees and Berdy, the garrison commander — longtime friends — have been working closely on the initiative.

The 173rd paratroopers were to jump onto an airfield near Caylus, France, on Wednesday and spend several days training with troops assigned to the Airborne Combined Joint Expeditionary Force, a Franco-British quick reaction force created in 2010.

But they ran into a hitch after arriving at Aviano. The jump was called off for the day because of high winds. And only three C-130s were available instead of four. That meant that when they flew out on Thursday afternoon, some 60 of the 250 paratroopers had to be left behind.

Maj. Chris Bradley, a brigade spokesman, said they’d be flown out a day or so later. “Airborne operations are inherently complex and we are prepared for these contingencies,” he said.

“Combat and training are different,” Bradley said. "If the brigade were called up in an emergency, it would likely get all the air support it needed," he added.