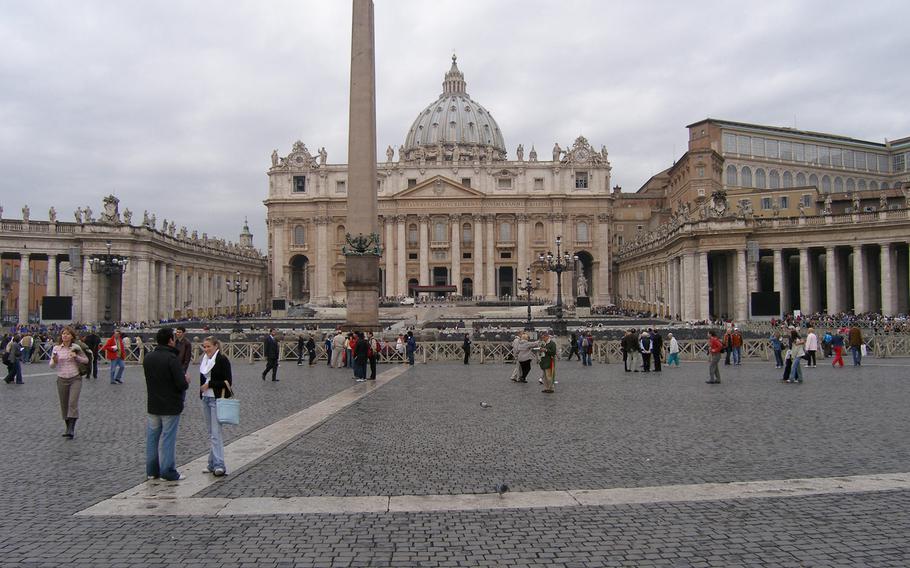 Buy Photo
St. Peter's Square in front of the Vatican in Rome. The Islamic State group has threatened to attack Italy, as well as other Western countries, but in the past two years, Italy has been spared the types of attacks perpetrated in France, Denmark, Germany and the United Kingdom. (Michael Abrams/Stars and Stripes)

Buy Photo
St. Peter's Square in front of the Vatican in Rome. The Islamic State group has threatened to attack Italy, as well as other Western countries, but in the past two years, Italy has been spared the types of attacks perpetrated in France, Denmark, Germany and the United Kingdom. (Michael Abrams/Stars and Stripes) Buy Photo
Tourists pose for photos in front of Rome's Trevi Fountain. The Islamic State group or its sympathizers have launched scores of attacks that killed hundreds and injured many more in France, Denmark, Germany, the United Kingdom, Belgium, Tunisia, Australia, Canada and the U.S., yet there have been no attacks in Italy. (Michael Abrams/Stars and Stripes) 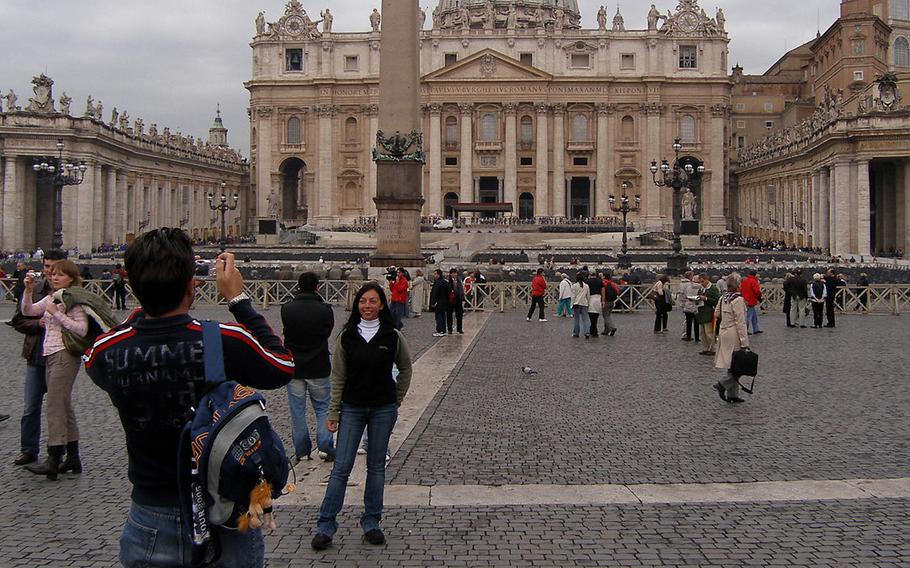 Buy Photo
The Egyptian obelisk in front of the Vatican in St. Peter's Square in Rome. Two years ago, the cover of the Islamic State group's English-language magazine featured an altered photo of the group's black flag flying from the obelisk. Despite threats to attack Italy, the country has so far been spared the types of terrorist attacks carried out in other European countries. (Michael Abrams/Stars and Stripes) VICENZA, Italy — Two years ago this month, the cover of the Islamic State’s English-language magazine featured an altered photo of the group’s black flag flying atop the Egyptian obelisk that anchors St. Peter’s Square in front of the Vatican.

Inside the issue, then Islamic State spokesman Mohammed Al-Adnani proclaimed the group would one day “conquer Rome.... break your crosses, and enslave your women...” The story went on to encourage jihadi sympathizers to attack Westerners “wherever they can be found.”

Since then, Islamic State fighters or sympathizers have launched scores of attacks that killed hundreds and injured many more — in France, Denmark, Germany, the United Kingdom, Belgium, Tunisia, Australia, Canada and the U.S.

Yet there have been no attacks in Italy.

Italian authorities have credited smart, focused intelligence and police work. But an expert on Italian foreign policy and international terrorism said there are other likely reasons Italy has thus far escaped an islamist terrorist attack: in particular, Italy’s restrictive citizenship laws and its ability and willingness to deport foreign nationals authorities see as threats.

Islamic State-inspired terrorists in Western attacks have been almost exclusively second-generation citizens. “Italy barely has a second generation,” said Lozenzo Vidino, the director of the program on extremism at George Washington University’s Center for Cyber & Homeland Security. “There isn’t really a jihadist scene.”

Experts say the Islamic State has chosen its targets partly on how many operatives it has available in a country. Far fewer Italian residents have gone to Iraq or Syria to fight with the Islamic State than those in France, Germany and the U.K., according to an April report by the International Centre for Counter-Terrorism at The Hague, Netherlands.

More than 900 French residents were estimated to have traveled to fight in Syria or Iraq, according to the report. Abdelhamid Abaaoud, a leader of the Paris attacks in November last year that killed 130 people, and most of those with significant roles in either the Paris or Brussels attacks had fought in Syria. Abaaoud, a Belgian of Moroccan descent who grew up in a neighborhood with an active jihadist scene, boasted he’d brought dozens of fighters back from Syria to launch European attacks.

Only a dozen of them had Italian passports, according to the Italian defense minister.

To be an Italian citizen, “you have to have Italian blood,” Vidino said; your mother or father must be a citizen.

Non-Italians hoping to gain citizenship face a lengthy, expensive and complex process. Children of non-residents born in Italy have to wait until they’re 18 to even apply for citizenship.

Because few non-Italian residents are able to become citizens, those suspected of supporting the Islamic State or recruiting fighters can be — and are — quickly deported. “If it’s difficult to charge them, you deport them,” Vidino said. “You can’t deport your own citizens.”

Dealing with suspected terrorists via the regular criminal justice system is difficult, experts say, because it’s often not possible to prosecute such people without compromising intelligence sources. In other cases, it’s not clear that laws have been broken.

For example, U.K. authorities have for decades wrangled with Anjem Choudary, a 49-year-old preacher and British citizen of Pakistani descent considered to have helped motivate at least 100 young people to turn to terrorism in Britain and continental Europe. But for 20 years, he had stayed just within laws guaranteeing free speech. He was convicted in September of encouraging terrorism and jailed for 5 1/2 years after posting a series of talks on YouTube in which he urged Muslims to support the Islamic State.

In Italy, a preacher like Choudary likely wouldn’t have acquired citizenship, and likely would have been deported early on.

The Italian government deported 102 people in the past 18 months, Italian Interior Minister Angelino Alfano said in a July report to the Italian parliament, including several preachers.

“All were found to be working to radicalize others and promote jihad in Italy,” Alfano said.

Vidino said they were quickly deported. “Most are just shipped out overnight,” he said.

Italy has in the past repeatedly run afoul of European Union provisions on deportation, both in deporting migrants and terrorism suspects. The EU does not allow deportations of individuals to nations where they could face torture or inhumane treatment. The prohibition “enshrines one of the fundamental values of democratic societies,” the European Court of Human Rights found in a 2008 case involving Italy’s deportation of a Tunisian after he was convicted of terrorism-related activities.

Vidino said many of Italy’s terrorism-related deportations were of suspects from the Balkans, where there’s little threat of torture. In other cases, Italian authorities have been prepared to deport terrorism suspects despite the EU rules. “The bar is lower in Italy,” he said.

Al-Adnani, the Islamic State propaganda chief, was killed by a U.S. airstrike in Syria in August, according to the Defense Department.

But Italy’s success in avoiding terrorist attacks is not taken for granted. Since the attacks in Paris in November 2015, Italy’s threat level — staged from zero to three — remains at level two.

Italy could be hit with an attack tomorrow, Vidino said.

“There are many ways you can enter Italy,” he said. “Rome carries a certain symbolism, absolutely. I think it’s a reasonable assumption that they will try.”