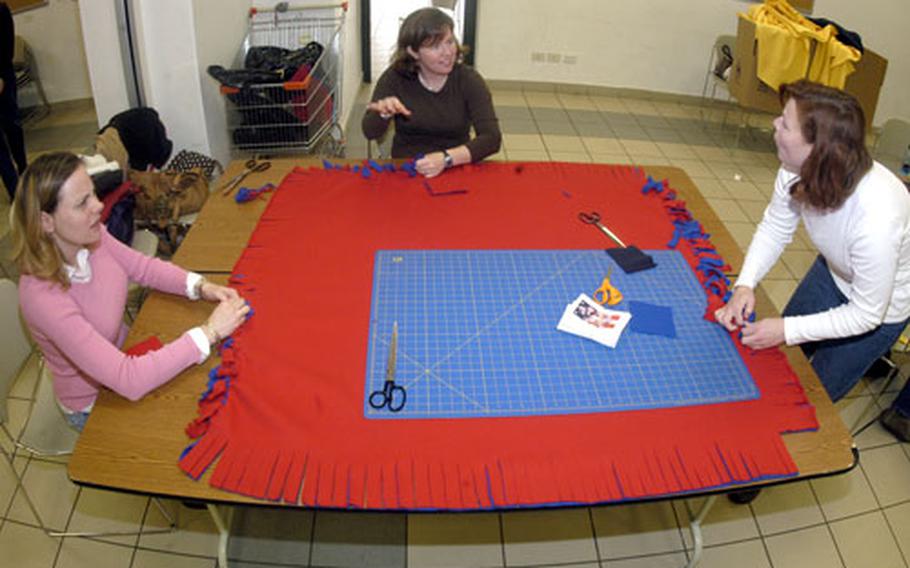 Carrie Schultz, left, Patty Blaser, center, and Lorri Brito chat Monday as they volunteer their time to tie together "no sew" fleece blankets that will be shipped from Naples, Italy, to a U.S. military medical treatment facility in Balad, Iraq, to be given to wounded troops there. (Sandra Jontz / S&S)

Carrie Schultz, left, Patty Blaser, center, and Lorri Brito chat Monday as they volunteer their time to tie together "no sew" fleece blankets that will be shipped from Naples, Italy, to a U.S. military medical treatment facility in Balad, Iraq, to be given to wounded troops there. (Sandra Jontz / S&S) 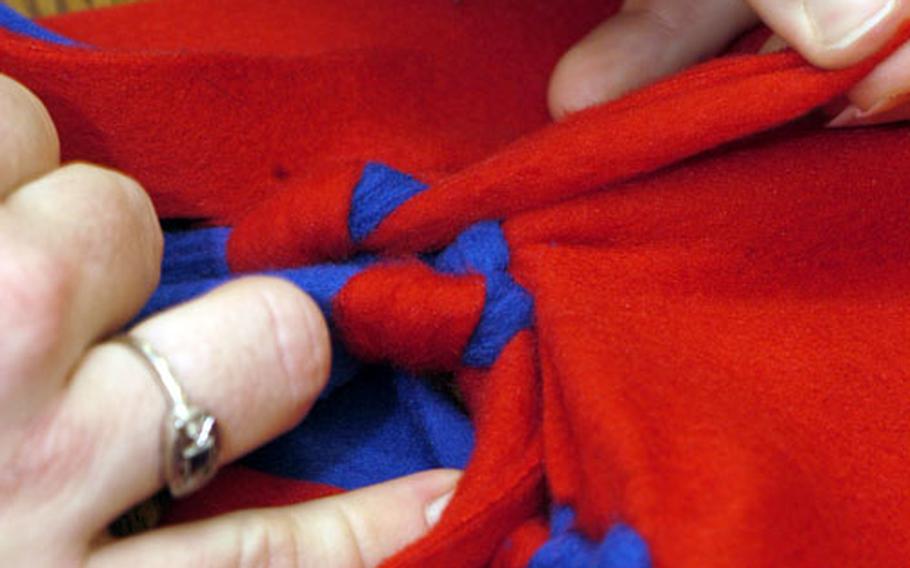 NAPLES, Italy &#8212; The deed itself required very little: some spare time and more than 100 yards of soft, boldly colored fabric.

But a few hours of knotting blanket fringes could make all the difference in the world for 50 wounded troops, said Lorri Brito, who, along with about 20 others, spent Monday morning creating polar fleece blankets for wounded troops in Iraq.

She came up with the idea of providing &#8220;no-sew&#8221; fleece blankets to wounded troops after her husband, an orthopedic surgeon at the U.S. Naval Hospital in Naples, was sent for three weeks to the Landstuhl Regional Medical Center in Germany. He told her of the high number of patients from the war zone, she said.

Doctors at Landstuhl have treated more than 37,000 patients from the wars in Iraq and Afghanistan, with about 20 percent of them seen for combat-related wounds.

&#8220;They&#8217;ll get these at the hospital in Balad [Iraq], and it will be something of comfort that will follow them all the way home,&#8221; Brito said of the bright red-and-blue or gold-and-blue fleece blankets &#8212; created simply by tying the fringes of two pieces of material together.

The spouses club of the Naples naval hospital joined the efforts of an umbrella organization called Soldiers&#8217; Angels Foundation, which has volunteer groups around the world who perform service projects for troops. A chapter in Germany supports Landstuhl.

On Monday, hospital spouses and other volunteers set out to create 50 of the blankets, and they reached their goal, said event organizer Toni Caragiulo. In a short time, she managed to arrange the time, place and enough volunteers who met the goal. The blankets will be shipped by week&#8217;s end to the combat support hospital in Balad.

&#8220;I think it&#8217;s important to support troops who are injured,&#8221; said volunteer Crecia Orsello. &#8220;I feel compassion for the families who are separated from their soldiers, and then to find out they&#8217;ve been injured in the war, that has to be even tougher. We need to do things to show our appreciation.&#8221;