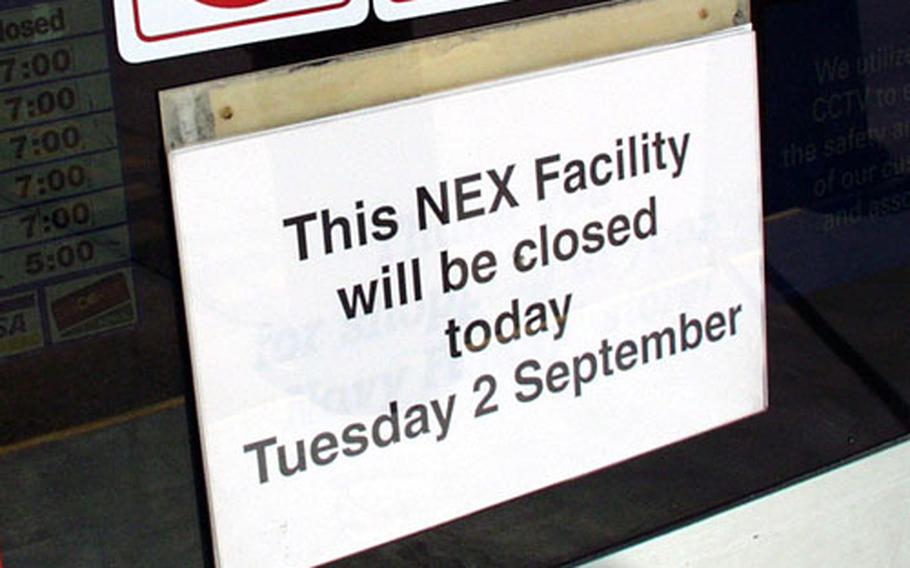 This sign was how many prospective shoppers found out about the strike-related closure of the Naples Navy Exchange and Commissary Tuesday, although security guards were telling some of those entering the base. (Jason Chudy / S&S)

NAPLES, Italy &#8212; Workers from two Italian unions went on a one-day strike Tuesday at U.S. military installations throughout the country, shutting down the Naples Navy Exchange and commissary and causing limited disruptions on other bases.

More strikes may be scheduled after a meeting next week between the unions and military officials.

The workers are striking over the U.S. military&#8217;s decision not to implement a new job classification plan signed earlier this year, an official with one of the unions said.

The Joint Civilian Personnel Committee had signed a plan to redo the system for some higher-level local national employees. The committee later decided it needed to resolve more issues in the plan and did not implement it.

Union workers struck over the same issue for four hours on July 25.

Fargnoli said that the unions will be meeting with JCPC next week in La Maddalena. He said he hopes the committee will &#8220;admit making a mistake&#8221; by not going through with the agreement.

Fargnoli said dates of any future strikes will be decided after the meeting.

According to Lt. Susan Henson, Naval Support Activity Naples public affairs officer, some base firefighters took part in the strike and base officials consolidated the remaining firefighters at locations &#8220;where it was deemed most critical.&#8221;

Because of this shift, Naples commanding officer Capt. Dave Frederick ordered the closure of the Agnano Navy Exchange and commissary complex.

Elva Giles, head bagger at the commissary, said she had scheduled about a dozen people to work Tuesday.