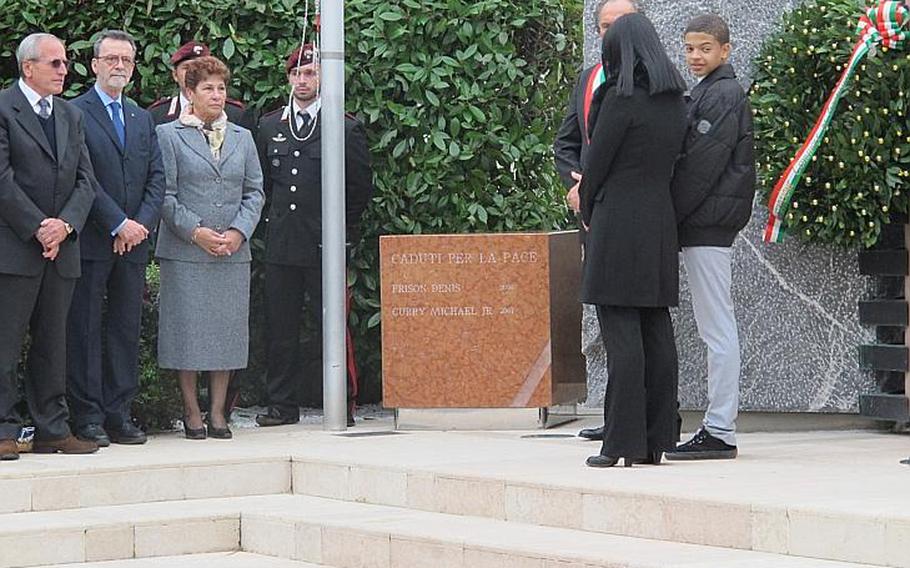 Buy Photo
Curry's son, Kevin, looks out from the podium during the ceremony, with his widowed mother, Lucia, at his side. Left are Tranquillo Frison, who thought of and paid for the monument to his son and Curry, the prefect of Padua and Frison's wife. (Nancy Montgomery/Stars and Stripes)

Buy Photo
Curry's son, Kevin, looks out from the podium during the ceremony, with his widowed mother, Lucia, at his side. Left are Tranquillo Frison, who thought of and paid for the monument to his son and Curry, the prefect of Padua and Frison's wife. (Nancy Montgomery/Stars and Stripes) 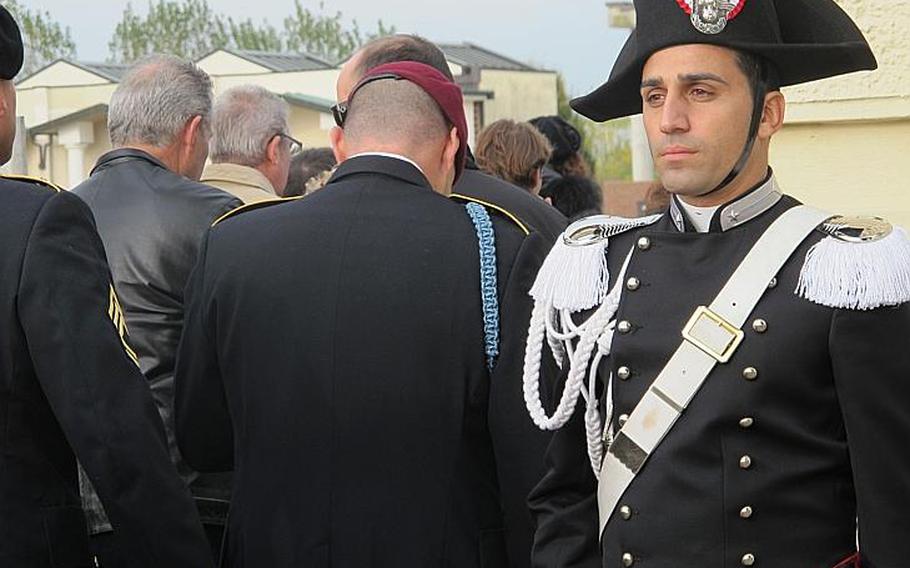 Buy Photo
An Italian Carabinieri stands post at the entrance to the Grantorto cemetery as Iocals and 173rd soldiers file in. They were preceded by a brass marching band which next lead the group to the town piazza to unveil a new monument to 1st Sgt. Michael Curry and Carabiniere Denis Frison. Both were "Caduti Per La Pace" - fallen in the cause of peace, according to the monument's inscription. (Nancy Montgomery/Stars and Stripes) 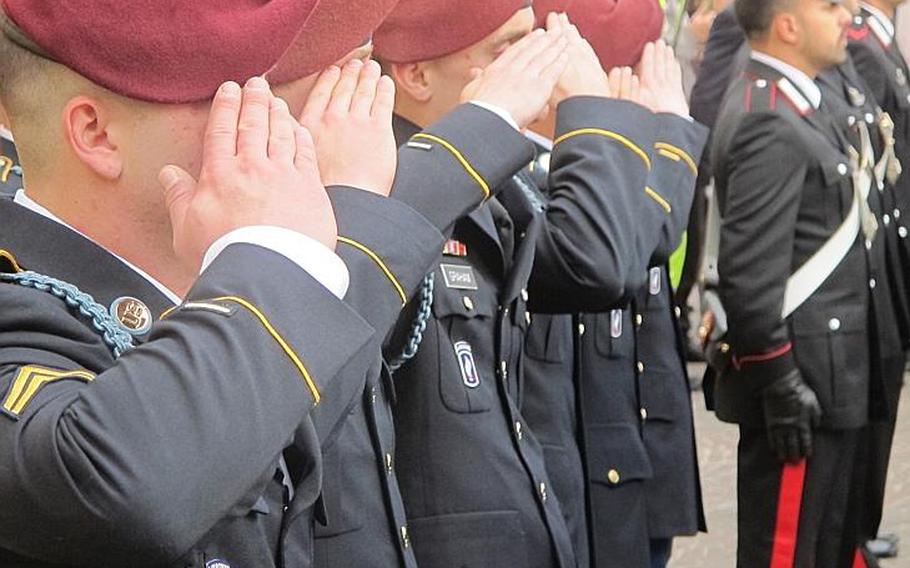 Buy Photo
1st Sgt. Michael Curry was born in the U.S., died in Afghanistan and was buried in Italy where he'd made his home and life. His photograph appears on his cemetery site in Grantorto, Italy. (Nancy Montgomery/Stars and Stripes) 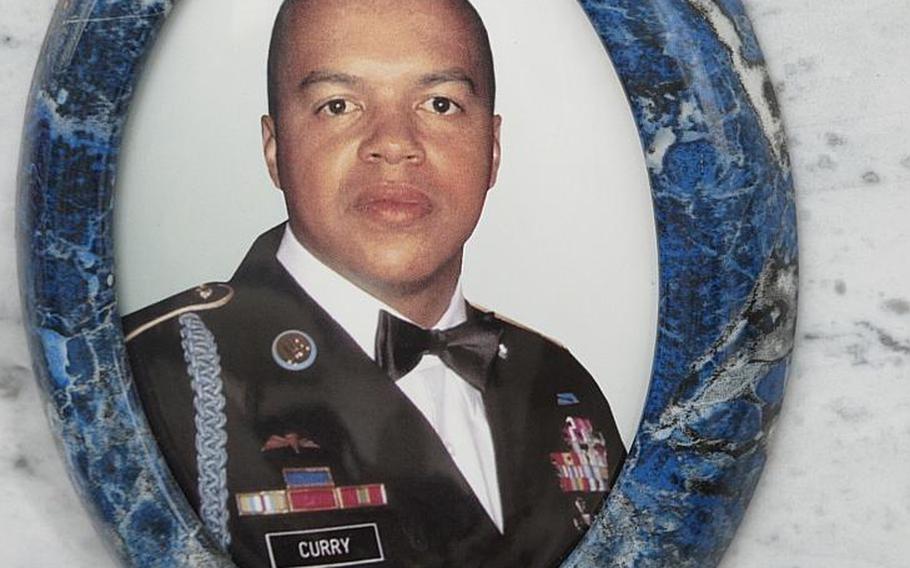 Buy Photo
1st Sgt. Michael Curry was born in the U.S., died in Afghanistan and was buried in Italy where he'd made his home and life. His photograph appears on his cemetery site in Grantorto, Italy. (Nancy Montgomery/Stars and Stripes)

And both men, friends for several years, died young.

Frison died at age 32 in July, 2006, of leukemia that his father said was caused by chemical exposure during a deployment.

Curry, of the 173rd Airborne Brigade, died the following July. He was 37 when his Humvee hit an IED during a route-clearing mission in Afghanistan.

Now the two soldiers are forever linked, their names inscribed on a stone monument in the town piazza. The monument, standing next to an Italian World War I memorial, is thought to be the only one in Italy and perhaps all of Europe to a U.S. soldier killed in Afghanistan.

It was blessed by a priest and wreathed by the Prefect of Padua during a more than three-hour ceremony Sunday that included Curry’s last unit — Company D, 1st Battalion, 503rd Infantry Regiment — along with Italian Carabiniere, Italian Alpine mountain infantry troops, a marching band, a full Roman Catholic mass, a pilgrimage of some 200 souls to the town cemetery and the reading of the names of the more than 100 Grantorto men killed in World War I.

“They wanted it to be more elaborate,” 1st Sgt. Erik Delagarza, current Company D first sergeant, said of the Italian officials who had planned the event in keeping with an Italian love of spectacle.

Delagarza said 173rd officials had worked to keep the ceremony, held four days after the anniversary of the end of World War I in Italy and just a day before the American Veterans Day, lower-keyed and somber, in keeping with American tradition, than it would otherwise have been.

“It’s paying respect on Veterans Day for us,” he said.

The ceremony not only represented American, Italian and military traditions, but also the deep roots sometimes developed by U.S. troops stationed overseas.

Curry, a native Floridian, enlisted in the Army in 1987. Vicenza was his first duty station, and the area became his home. It’s where he met his wife, Lucia, and fathered two sons, one now in high school and the other at Columbia University. After each stateside assignment, Curry gladly returned.

“Like all of us who’ve been here forever, you tend to adopt it or it adopts you,” Delagarza said.

Curry’s grave is in the Grantorto cemetery, a distance of about 10 miles from U.S. Army Garrison Vicenza.

“I bring flowers to his gravesite every 23rd of July. I leave a note from all his friends,” said Robin Gonzales, former 173rd Brigade secretary who now works for the garrison’s Morale, Welfare and Recreation department.

Gonzales said Curry had become an avid and expert cyclist, like many of his Italian neighbors. “And he was a family man,” Gonzales added, who had been reluctant to deploy in 2007 so close to retirement. He’d gone anyway, Gonzales said, in duty to guard the lives of young soldiers.

The idea for the memorial started with Tranquillo Frison, who wanted his son’s service remembered by the town. A graduate of the Carabiniere’s military academy, a special forces course and American Airborne school, he had deployed many times — to Iraq, Bosnia, Albania, Pakistan, Saudi Arabia and Afghanistan, where on one deployment he was a bodyguard for the Italian ambassador in Kabul.

Frison said his son contracted acute leukemia from exposure to depleted uranium on a deployment to Bosnia, and so — despite a bone marrow transplant from an unidentified U.S. soldier — died as a result of his service.

In 2007, Tranquillo Frison had attended Curry’s funeral in Grantorto, out of respect and the fact that Curry, like his son, was a paratrooper. But he wasn’t acquainted with the sergeant, and he didn’t know the two were friends until his wife, who knew Curry’s widow, told him last year.

He approached town officials with the idea of honoring both men, each of whom had served in and lost their lives because of peacekeeping missions, Frison emphasized. Town officials agreed.

On Sunday, Frison, who’d funded the monument, stood on the podium in the Grantorto piazza, next to his wife and Curry’s widow and younger son, enjoying the pomp and circumstance. “Now my heart is at peace,” he said after the ceremony.