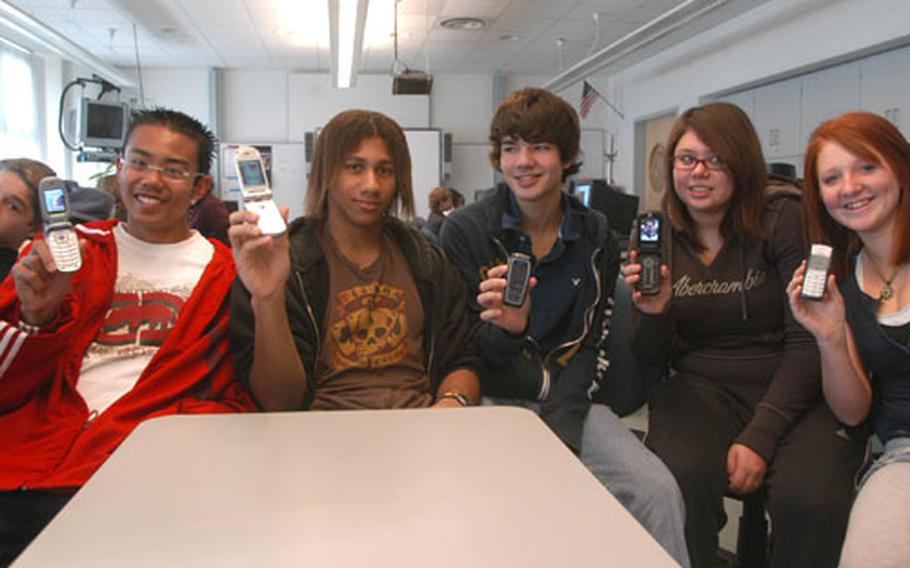 Aviano High School students Francis Ledesma, Dante Rankin, Andy Kreutz, Katie Evans and Hannah Watson all have their own cell phones. They do a lot of text messaging, but not in class. Students at Aviano are only allowed to use their cell phones before classes start, at lunch and after school. Many students keep their phones set on vibrate. (Kent Harris/S&S)

A report in the Italian media last week raised some eyebrows at the headquarters of the DODDS-Europe.

A 15-year-old student from Trieste was caught sending nude pictures of herself for 25 euros a shot. She had apparently used her cell phone to take the pictures and was using a school computer to send them out, according to a report filed by the ANSA news service.

Authorities were quoted as saying it was the seventh such case they had uncovered involving students in the Friuli-Venezia Giulia region since the school year started &#8212; though none of the others had been making money off the process.

Aviano High School is located in the Friuli region, only about an hour away from Trieste. And much closer via a cell phone call, text message or e-mail. But a handful of students interviewed Wednesday said they weren&#8217;t aware of any such entrepreneurship at their school.

Additionally, DODDS computers are heavily monitored. Many Internet sites and access to Hotmail or Yahoo! accounts are blocked. Students can get individual e-mail accounts through the school system, but those are monitored, too.

The school system doesn&#8217;t have a universal policy on cell phone usage by students, Gurley said. So rules can vary somewhat from school to school. For instance, students at Aviano only can use their cell phones during lunch time, according to Principal Debra Johnson.

If it happens repeatedly, a student&#8217;s parent will have to pick up the phone.

The policy&#8217;s a bit different at RAF Alconbury in the United Kingdom. Gael Coyle, principal of both the middle school and high school, said students are technically prohibited from having cell phones at all in the student handbook. But she said educators aren&#8217;t going to look for them unless there&#8217;s a problem.

&#8220;And we rarely ever have problems,&#8221; she said. Students are given &#8220;a gentle reminder&#8221; the first time a cell phone goes off. They lose the phone for the rest of the day the second time it happens. And their parents have to pick up the phone the third time.

Four of five students interviewed at Aviano said they keep their phones on vibrate during school hours. The fifth student said she turns hers off.

They said they rarely receive calls during class and wait until lunch or after school to answer them. They also said they hadn&#8217;t seen any instances of students trying to text message each other during class, though all admitted they could text fairly well without even looking at their phones.

Johnson said cell phone usage by students is prohibited mainly because it would interrupt classes. But the potential for cheating also exists, either from students sending text messages with answers to each other or taking pictures of the test.

Is cheating going on with the help of technology?