Italian soccer fans show that they know how to celebrate 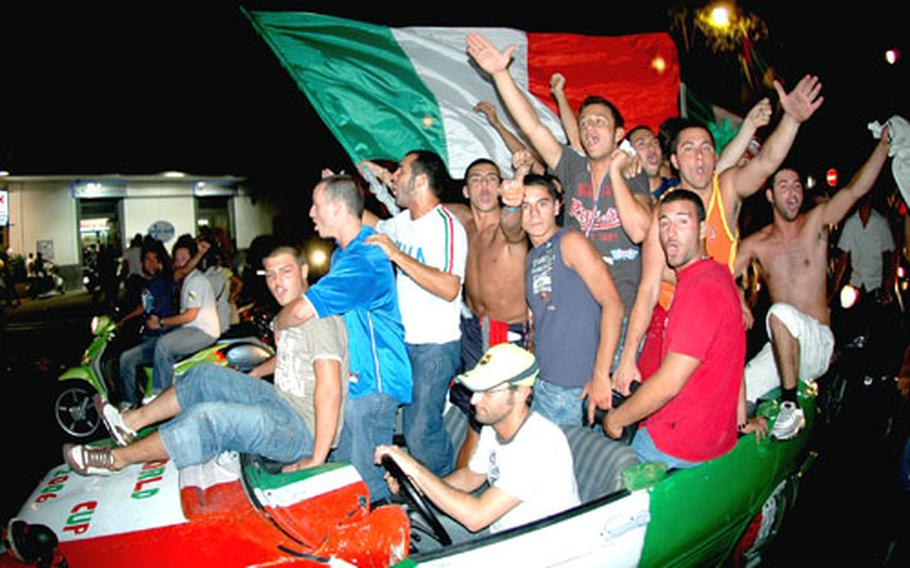 Italian fans take to the streets Tuesday night with flags waving and horns honking to celebrate Italy’s 2-0 victory over Germany in the semifinals of the 2006 World Cup. (Sarah Bir / Special to S&S)

NAPLES, Italy &#8212; The pandemonium that erupted in the streets of downtown Naples on Tuesday night was a cacophony of blaring horns from cars and mopeds, thunderous fireworks, occasional screeching of tires, metal ladles pounding metal pots and pans, and shouts of jubilation as Italians celebrated Italy&#8217;s booting Germany right out of the World Cup.

The partying, which lasted into the early hours of the morning, was electrifying, contagious, exhilarating and exhausting.

We started as a group of five &#8212; close friends (three Americans, one Italian, and one half of each) who decided at the last minute to toss together an impromptu gathering to watch the semifinals. Key to the plan: It had to take place in the heart of Naples, where life other than soccer came to a grinding halt.

We hoped for two things: one, that Italy would win, so that two, we could get an up-close-and-personal view of a post-victory celebration.

Moments before the 9 p.m. kickoff, we snagged one of the last available tables at a caf&#233; in Piazza Dante in downtown Naples, and settled in for the match that started as a slow (and at times boring) skirmish, but exploded in the waning minutes of overtime to end with the surprising 2-0 Italian win.

From five, we grew to thousands.

&#8220;I watched the qualifying match between Italy and Germany out in town so I could be a part of the excitement that goes along with watching a football game at a caf&#233; in Italy,&#8221; said 26-year-old Shaun Knittel. &#8220;When Italy won, there was an unbelievable wave of World Cup fever. The celebrations in the street went on for hours, and I saw the faces of the Neapolitans filled with pride. I realized that as an American, I was given this great opportunity to be a part of history: Italy going to the big game!&#8221;

We joined a throng of jubilant party-goers down Via Toledo &#8212; taking turns furiously waving two Italian flags bought earlier that evening for 5 euros each from a street vendor.

On Wednesday, we shared our memories of the early morning revelry.

&#8220;I was never a fan of football (what Europeans call soccer) until I started watching this year&#8217;s World Cup series in Italy,&#8221; reveler Sarah Bir said. &#8220;It was such a different experience than anything I have ever witnessed watching sports in the States. Yes, there are huge sports fans there, too, but this was on a global level, and to be in the middle of it was amazing.

&#8220;It was easy to get swept up in the football fever and feel as if you were taking part in something that was a part of history and a once-in-a-lifetime opportunity,&#8221; said Bir, 30. &#8220;How many people can say that they watched Italy make its way into the finals while cheering side by side with the Italians?&#8221;