Italian police depend on Navy dog for drug arrest 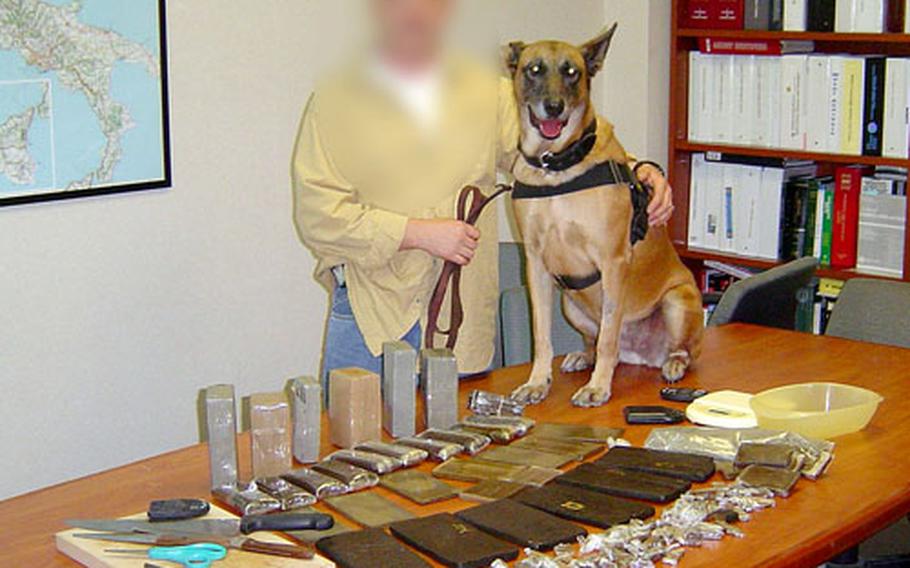 A U.S. Navy dog handler and his dog helped Italian authorities nab an Italian man who worked at the U.S. military base library. A search of the man’s car netted 4 kilograms of hash, and a follow-up search of the man’s home netted hash, marijuana and cocaine. In all, the drugs were estimated to be worth more than $230,000. The names of the handler and the dog are being withheld for their protection, the Navy said. (U.S. Navy photo)

NAPLES, Italy &#8212; A U.S. sailor and his military working dog helped in the recent drug arrest of an Italian man who worked at the library at the U.S. Navy Capodichino base in Naples, officials said.

U.S. officials do not suspect the man dealt drugs to U.S. sailors or while on the base, said Lt. Cmdr. Perry Suter, head of the Naval Support Activity Naples security department.

Italian officials arrested Bruno Cuccaro, 45, of the Fuorigrotta neighborhood of Naples, according to the daily Neapolitan newspaper Cronache di Napoli.

Cuccaro had been under investigation by both local authorities and the Naval Criminal Investigative Service at the base, Suter said. NCIS was involved because the Italian worked on the base.

A search of the car, which took place off base, netted 4 kilos of suspected hashish hidden in the spare tire, the U.S. military dog handler said Tuesday in an interview. The sailor&#8217;s name is not being released for his protection.

Police also found an assortment of drug paraphernalia and knives, likely used to cut the drugs, the sailor said.

A search of the base library netted no drugs, officials said.

The dog is a Belgium Malinois trained at Lackland Air Force Base in Texas, where all military dogs are trained.

The dog and its handler, a 14-year Navy veteran, run roughly 50 training searches a month at the two Navy bases in Naples.