Italian journalists get tour of military base in Vicenza 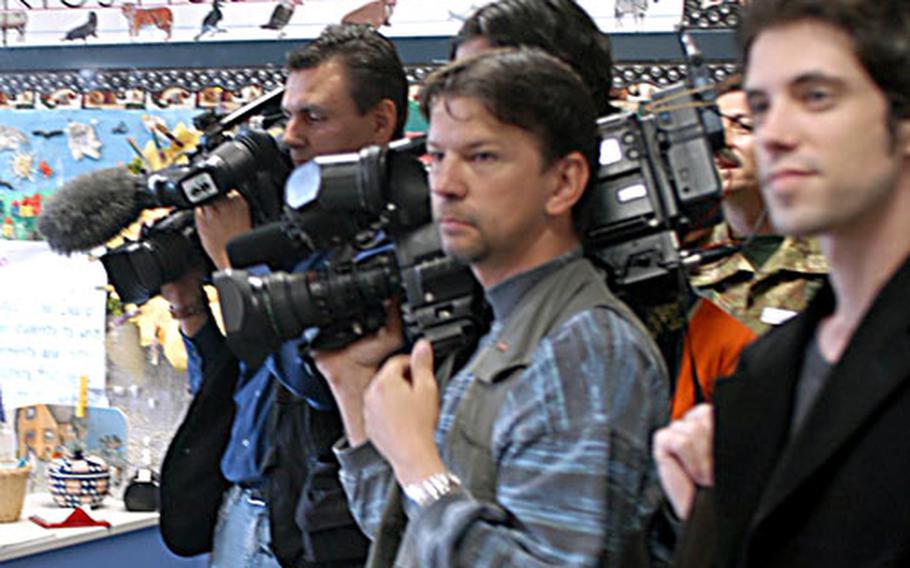 Italian journalists visit a second-grade classroom at Vicenza Elementary School on Friday during a media day on Caserma Ederle. Journalists were invited on base to see how the community operates. (Kent Harris / S&S)

VICENZA, Italy &#8212; While many Americans stationed on military bases around Europe might not find their normal routines all that fascinating, there are those who do.

Namely, many local nationals who can&#8217;t easily enter bases occupied by foreign troops on their soil.

After some recent Italian media reports regarding a potential U.S. move to the Dal Molin airfield contained information that U.S. military authorities say wasn&#8217;t factual, the Southern European Task Force (Airborne) decided to invite the local media onto base &#8212; without having a specific story to pitch.

&#8220;It dawned on us that maybe you don&#8217;t know what we do on Caserma Ederle,&#8221; Maj. Gen. Frank Helmick, the SETAF commander, told a small group of Italian journalists Friday.

So the journalists, representing both print and broadcast media, visited places such as Vicenza Elementary School, a briefing room full of servicemembers and civilians studying for an upcoming exercise, the education center, one of the new barracks buildings, the Army Community Services center and AFN-South.

After a few words from Helmick, the journalists got a briefing on the organization from Col. Skip Davis, the SETAF chief of staff, and Col. Salvatore Bordonado, the Italian base commander and deputy SETAF commander.

Bordonado&#8217;s very position might have been news to many; roughly a dozen Italians are part of the unit&#8217;s chain of command.

Although about 750 Italians work on Ederle, there&#8217;s still a lot of mystery about what happens behind the walls, according to Elisa Santucci, one of the visiting journalists.

And, she said, there&#8217;s a lot of interest about American activities in Vicenza these days, with the Dal Molin move generating a lot of it.

Santucci, who works for local television station TVA Vicenza, isn&#8217;t one of those. She said she&#8217;s covered the base for years and is familiar with many of its operations.

Still, she appeared to be learning a bit here and there during the tour.

&#8220;Days like this are important to let people understand,&#8221; she said. And it is also useful for television journalists such as herself to gather footage of base activities.