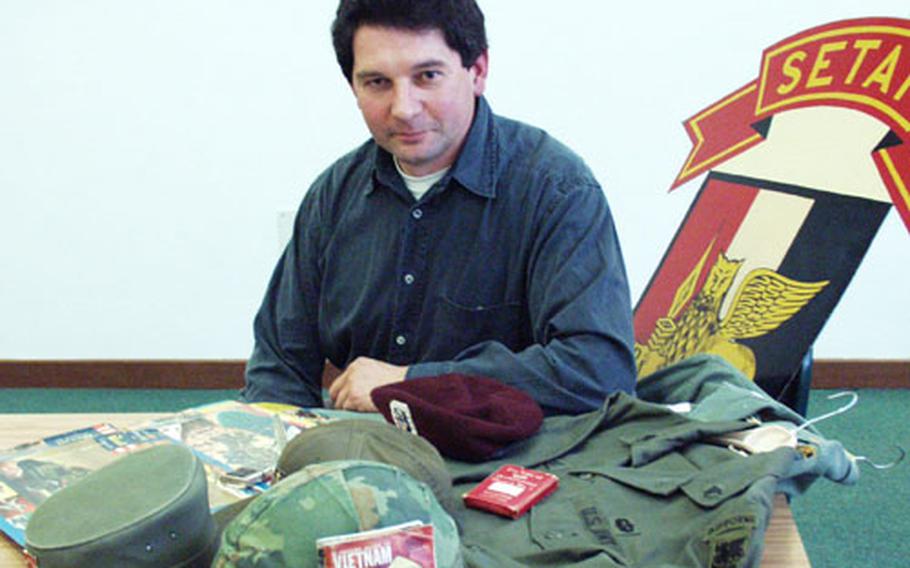 Fabio Cortese, who works at the commissary at Caserma Ederle in Vicenza, Italy, has a large collection of gear, memorabilia and signs from the U.S. military. (Kent Harris / S&S)

VICENZA, Italy &#8212; Fabio Cortese has never worn a military uniform in the service of the United States of America.

But the 40-year-old Italian national, who works at the Defense Commissary Agency&#8217;s store at Caserma Ederle, probably owns more U.S. military apparel than most of those serving in today&#8217;s armed forces.

He has lists showing the hundreds of uniform pieces he owns &#8212; helmets, jackets, boots, belts &#8212; plus gear, such as canteens.

He keeps his collection in his house, and those wishing to talk to him about it should come prepared to discuss the pros and cons of the gear used in Vietnam and that used in Iraq today.

Local laws require that collectors get annual approval for the modern military apparel and gear they own.

&#8220;They&#8217;re concerned that you could disguise yourself as a soldier and enter a military base,&#8221; Cortese said, showing a handful of pages listing his items recently approved by the local prefect.

Weapons &#8212; which Cortese doesn&#8217;t collect &#8212; are even more tightly controlled in Italy. He said getting the special storage set up and permits would be too much trouble and cost too much money.

Cortese said he doesn&#8217;t need approval for most of his collection, though, because gear from eras such as Vietnam wouldn&#8217;t normally pose a security risk. And it&#8217;s those uniforms, as well as historical memorabilia from the Southern European Task Force (Airborne) that make up the highlights of his collection.

Cortese, who seems to have memorized dozens of books on U.S. military gear, has various equipment from all the American services during the conflict. He has multiple sets of some items, though many have subtle differences that casual observers might not notice.

It&#8217;s those differences, he says, that make American military uniforms so interesting. The United States is constantly changing its equipment and isn&#8217;t afraid to experiment in attempts to make servicemembers more comfortable or better protected.

That means he has both more opportunities and challenges in keeping a collection.

Cortese&#8217;s tastes have changed somewhat over the years as well. Growing up, his father owned several apartments that Americans rented while in Vicenza. He played with their children and started building models of American military equipment.

He says his English got better simply by trying to figure out the instructions to build things, such as a small version of the USS Enterprise.

As far as military uniforms and gear go, a few items from his collection date back to stuff the renters left behind. But most has come from purchases at markets in cities, such as Milan, or by trading with other collectors.

Cortese said he&#8217;s at the point now where things he wants are hard to find.