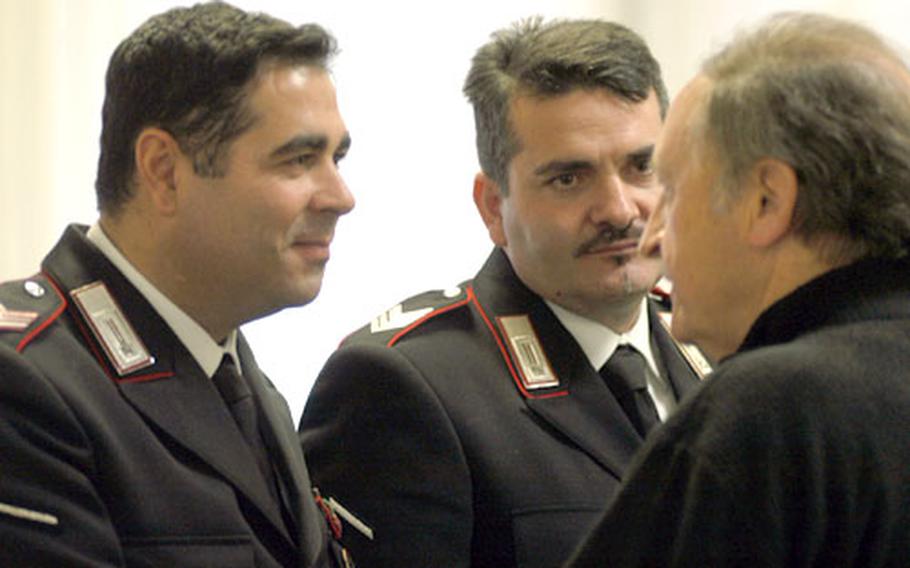 Italian Carabinieri members Antonio Altavilla, left, and Cosimo Visconti, center, visit with staff members at the Landstuhl Regional Medical Center in Germany on Thursday, a little more than a year after the soldiers were admitted to the hospital with critical injuries. (Ben Murray / S&S)

Critically wounded during a suicide bomb attack in Nasiriyah, Iraq, which killed 17 of his comrades, Altavilla&#8217;s lungs and liver were badly injured, and he was bleeding internally.

Likewise, Cosimo Visconti, another Carabinieri injured in the attack, could have spent the rest of his life in a wheelchair.

But Altavilla and Visconti both walked into Landstuhl with smiles on their faces Thursday in what hospital officials said was the first-ever return visit by foreign soldiers treated at the American facility. The two Italians, fully recovered from their injuries, wanted to personally thank the doctors and &#8220;see the faces of the people who helped him,&#8221; Altavilla said through an interpreter.

The two men walked through several wings of the hospital, shaking hands with staff members and meeting people from the intensive care unit, which treated them when they first arrived.

The visit was a rare opportunity for hospital staff to see the results of their work, Putnam said, because Landstuhl often acts as a way station for critical patients being moved to stateside hospitals.