Italian base workers support proposed use of Dal Molin 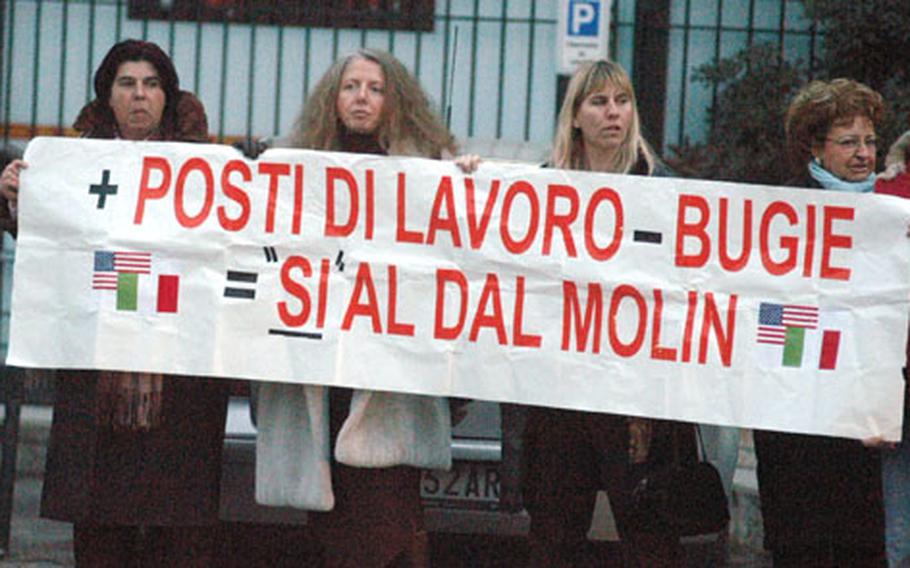 VICENZA, Italy &#8212; Hundreds of Italians employed by the U.S. military took to the busy street in front of Caserma Ederle on Thursday to show their support for the proposed use of Dal Molin airfield.

Thousands of motorists got the message. Whether they wanted to or not.

While the traffic wasn&#8217;t backed up all the way to Padova &#8212; about 20 miles away on the A4 Autostrada &#8212; it was backed up almost to the freeway exit, a few miles from the base. And cars were forced into idle at times on Via Della Pace, the main road that the protesters were gathered on.

Protesters said they needed to garner attention to their cause to counter demonstrations by those opposed to the proposed U.S. use of the airfield. American military officials have said they want to base the 173rd Airborne Brigade in one location. The move would bring in 1,600 troops temporarily stationed in Bamberg and Schweinfurt in Germany. The brigade stood up in Vicenza on June 12, 2000 with only one battalion. It has since grown to six battalions. Only two are based on small, crowded Ederle.

Those opposed to the U.S. expansion have staged several protests of varying sizes. A small one earlier in the week temporarily trapped Robert Spogli, the U.S. ambassador to Italy, in his vehicle before Italian police intervened. Spogli had been meeting with local officials to discuss the issue.

Roberto Frizzo, who works in communications on base, said he believed that a majority of Italians in Vicenza support the U.S. expansion.

Employees carried signs stating the base employs 744 Italian workers. Several pointed out that the shops they were protesting in front of, hundreds of homeowners who rent to Americans and others benefit greatly from the American presence.

That presence could be in jeopardy if the Dal Molin expansion, or a similar situation, doesn&#8217;t get approved.