Italian base employees’ protest has slight effect on Capodichino 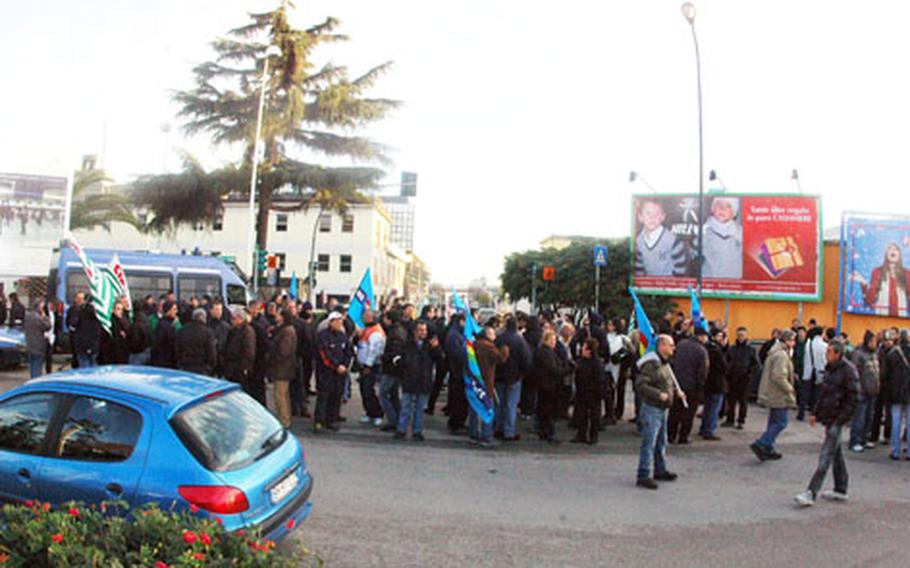 Roughly 100 Italian workers from the U.S. Navy base at Capodichino protested Wednesday morning and blocked vehicular access to the road that leads to the main gate of the base. (Photo by Sandra Jontz/S&S)

The strikers ended the protest by 1 p.m. after union leaders met with the Naples prefectural officials to voice labor complaints. Employees, however, remained off the job for the rest of the work day.

Essential personnel were told to show up for work in the pre-dawn hours to avoid being trapped behind picket lines, officials said. Some commanders told those not necessarily needed to avoid coming to the base.

"We knew of the potential impact, and we had ... essential personnel report prior to the strike," said Capt. Ike Skelton, spokesman for Naval Forces Europe.

Though far fewer personnel were on base than usual, the strike had a minimal effect on base operations because of prior planning, said base spokesman Lt. Paul Macapagal.

Labor union representatives said the strike was the culmination of failed or stalled talks with base leaders on a number of issues. The unions are demanding that a human resources representative be appointed to deal with all Italian employees regardless of which department or tenant command they work for; that the base cease shifting some civilian jobs held by Italians to American workers; and that the Navy grant Italian employees the same privilege to shop at base facilities as the Navy sometimes gives to VIPs and other special guests.

Navy Exchange mini-mart workers also arrived earlier than usual. June Cretchain got to the base at 4:30.

About 100 Italian workers started protesting about 5:30 a.m. Protesters formed a human barricade across the road leading to the base&#8217;s front gate. Drivers were able to get on the base via the back gate. Strikers held a similar protest Friday at the support site in Gricignano.