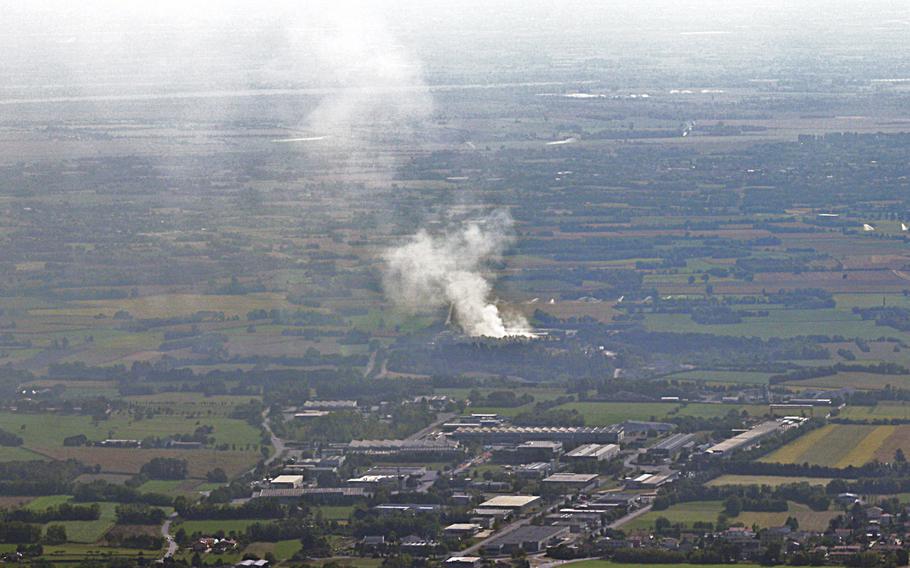 Buy Photo
Smoke rises from a waste treatment plant about 6 miles from Aviano Air Base, Italy, on Sept. 20, 2020. Authorities on Friday lifted a warning to avoid touching grass and soil due to contamination fears from the fire, which burned for days. (Norman Llamas/Stars and Stripes)

AVIANO AIR BASE, Italy — Local authorities lifted a warning to avoid touching grass and soil due to contamination fears, following a blaze at a waste treatment plant last weekend about 6 miles from the U.S. base.

On Friday, regional Deputy Gov. Riccardo Riccardi said local mayors would be advised that an ordinance in response to the fire, which included a warning to avoid eating homegrown vegetables, poultry and eggs, was no longer in effect, the Il Gazzettino newspaper reported.

Pollutant levels in air samples analyzed during the fire, which began Sept. 19, were four times above normal, the environmental agency for the Fiuli Venezia Giulia region said. But followup testing Thursday found that pollution had decreased significantly, Riccardi said, adding that it was safe again to consume garden-grown food.

An investigation into the causes of the blaze at the Servizio Nettezza Urbana Ed Affini plant was launched soon after the fire was extinguished Monday. A similar fire damaged the waste treatment facility in October.