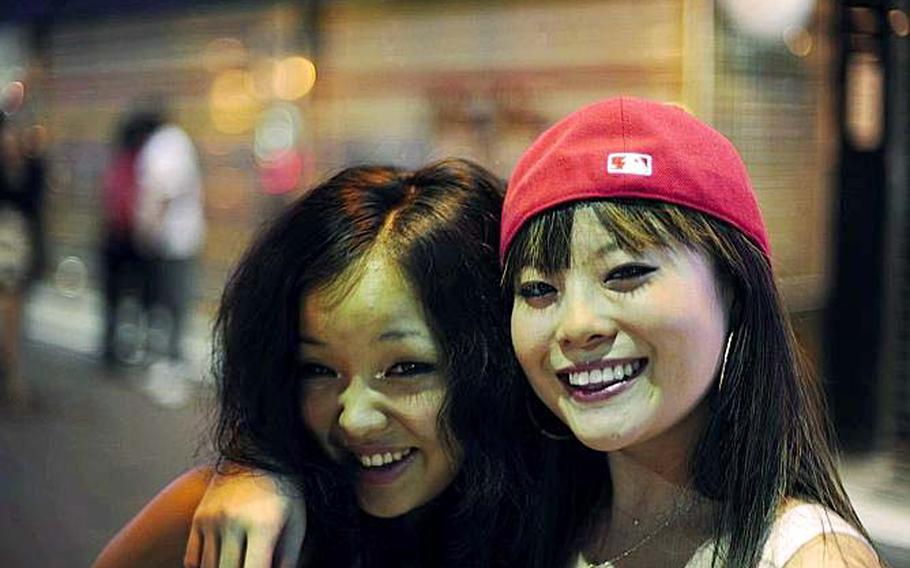 Two South Korean girls hang out in Itaewon’s entertainment district. The area – famed over the years for its bars, brothels and crowds of U.S. soldiers from nearby Yongsan Garrison – is transforming as a number of upscale stores, cozy coffee shops and gourmet restaurants have opened in the past few years. (Jaymes Cloninger)

Two South Korean girls hang out in Itaewon’s entertainment district. The area – famed over the years for its bars, brothels and crowds of U.S. soldiers from nearby Yongsan Garrison – is transforming as a number of upscale stores, cozy coffee shops and gourmet restaurants have opened in the past few years. (Jaymes Cloninger) 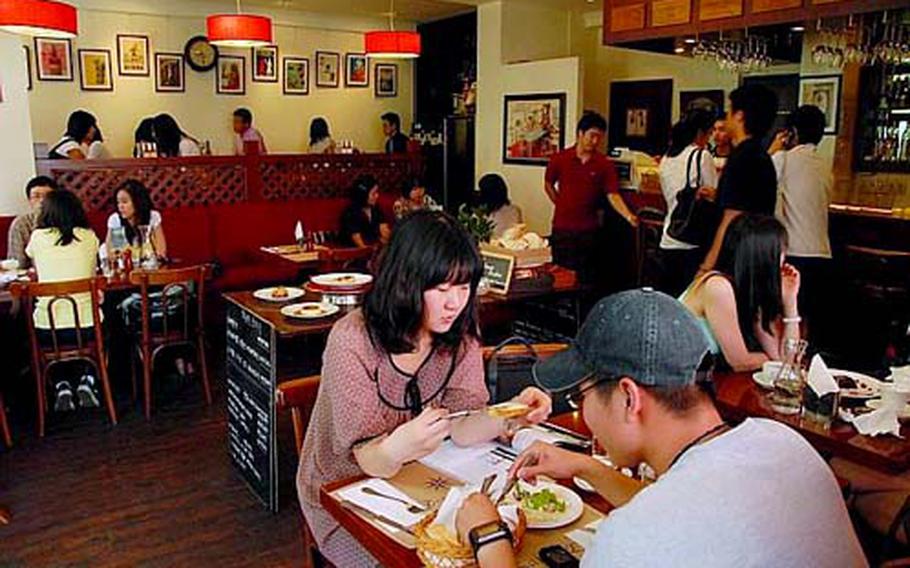 South Korean customers fill Le Saint-Ex during the middle of a weekday afternoon. The French bistro was one of the first foreign restaurants to open in Itaewon. (Ashley Rowland / S&S) 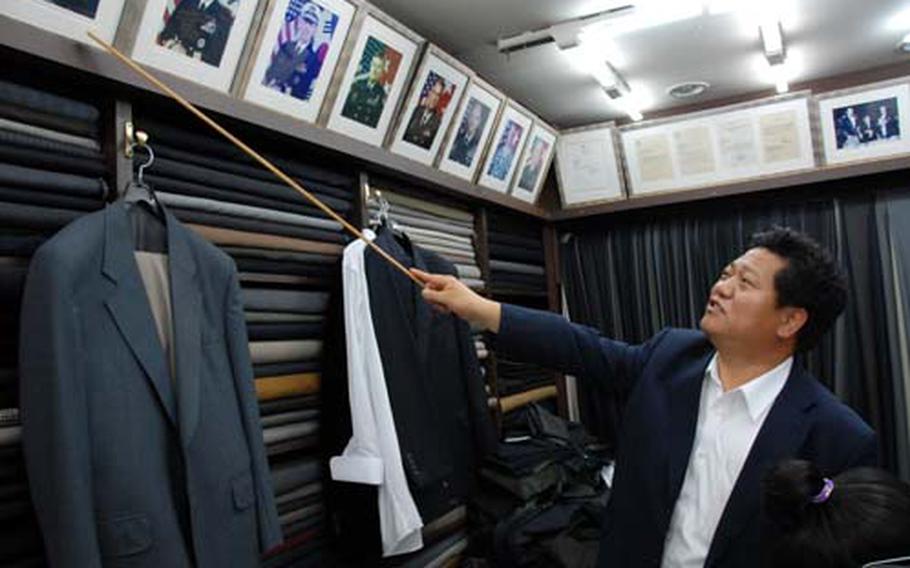 Park Wan-yong, owner of New York Tailor in Itaewon, points to pictures of the former U.S. Forces Korea commanders who were his customers. Park said he will lose many of his customers when the base closes in 2012. (Ashley Rowland / S&S) Choe Bok-soo sells eel skin products in Itaewon and said most of his customers are South Koreans and foreigners in Seoul&#39;s diplomatic community. U.S. troops and their families used to make up most of his customers, but they&#39;ve dropped as the number of servicemembers stationed in South Korea has decreased. (Ashley Rowland / S&S)

SEOUL &#8212; Kuk Moon-kyun chose an unlikely home for her boutique flower shop &#8212; a central Seoul neighborhood famed as a hangout for American soldiers who were more likely to spend their money on beer and prostitutes than expensive flower arrangements.

Before she opened her shop, Kuk had been to Itaewon only once, to scout an affordable spot for her new business.

Growing up in Seoul&#8217;s ritzy Gangnam district, she had avoided Itaewon because of its reputation. She had heard that the American soldiers stationed nearby at Yongsan Garrison sometimes got in trouble with the police. But rent in Gangnam was too expensive, the equivalent of $2,000 to $3,000 dollars per month. A space the same size costs half as much in Itaewon.

Today, the 31-year-old said her store, which sells chic flower arrangements that average about $40, is thriving. She describes Itaewon as "exotic," and said half of her customers are expatriates &#8212; no surprise in an area that houses most of Seoul&#8217;s foreign population.

What is surprising, she said, is that the other half of her customers are Korean. Until recently, few Seoul residents had visited this area known for its bars, brothels and U.S. soldiers. Media reports of soldiers beating taxi drivers, sexually assaulting women and fighting in the bars and on the streets kept the Koreans away.

But this once-sleazy neighborhood is changing.

Buoyed by a population that has more spending money and is better-traveled than any other generation of Koreans, a number of upscale stores, cozy coffee shops and gourmet restaurants have opened in the past few years. The pace of Itaewon&#8217;s transformation has quickened in the past year, with the opening of a number of foreign chains, including a Hard Rock Caf&#233; and a Calvin Klein store.

Emerging market"It&#8217;s kind of an emerging market," said Kim Tae-eung, who has opened two Thai restaurants and a Mediterranean bistro in Itaewon in the past three years.

Itaewon has been known as the foreigner&#8217;s district of Seoul since Japanese invaders made it their home 400 years ago. For decades the area has been known as "little America" because most of its customers worked at Yongsan Garrison.

Today, Itaewon is an eclectic mix of trendy shops and restaurants, sidewalk vendors selling hats and knock-off purses, and a maze of backstreets lined with vendors, and in some spots, brothels.

You can buy meat that meets Muslim standards, an electronic Koran and hijab on one street, African hair weaves and stewed plantains on another. The city&#8217;s only mosque is a five-minute walk from so-called "Hooker Hill," the red light district that once catered primarily to the U.S. military and now has a clientele of mainly businessmen, English teachers and other foreigners.

When Ahn Sang-joon opened Le Saint-Ex &#8212; a popular French bistro &#8212; eight years ago, it was one of the first foreign restaurants in the area.

Then, most of his customers were French, Australian or American. Today, 80 percent of the customers are Koreans who want to try foreign foods they&#8217;ve heard about or tasted while traveling or studying in other countries.

He said South Koreans are more educated about other cultures because they can afford to travel. Until the early 1990s, they had to get special permission from the government to leave the country, so few people left the peninsula.

"They can see other countries, other people. They can study English," he said. "The Korean people&#8217;s curiosity is greater than it was 10 years ago."

More change comingItaewon will change even more dramatically when the United States closes Yongsan Garrison, headquarters to the U.S. military in South Korea and home to about 20,000 troops, civilian workers and their families.

Yongsan is scheduled to close by 2012, when all U.S. military bases in and north of Seoul are supposed to consolidate and move south to the Pyeongtaek area. There is speculation the date likely will be pushed back several years because of the cost of the move, possibly to 2019.

Even though thousands of Americans will leave Seoul in the transition, some merchants say the move ultimately will help business in Itaewon, not hurt it. The city plans to turn the garrison into a massive park that business owners say will draw more South Koreans to the area.

Twenty-five years ago, most of Cheo Bok-soo&#8217;s customers were soldiers or civilians who worked for the U.S. Army. Today, most of the people who buy his eel-skin purses and slippers are Koreans, foreign tourists, and diplomats &#8212; but not Americans.

Cheo, who has lived in Itaewon for 30 years, said he has always felt safe there because of the presence of American and South Korean soldiers. But most South Koreans were afraid of the foreigners, he said.

He said his business has decreased as the number of American soldiers has dropped.

"Personally, I hope they remain stationed here because it is better to me and my business," he said.

Some fear still lingersMany South Koreans said their fear of foreigners &#8212; particularly American soldiers &#8212; has kept them from shopping or eating in Itaewon. But more South Koreans say they are visiting the area, some hesitantly.

Some of her friends liked it and continue to visit; some of them felt scared and never returned. She said most Koreans, even those her age, haven&#8217;t been to Itaewon because of its reputation as a place full of foreign criminals.

Jeon has gone back repeatedly, mostly to try new foods at foreign restaurants. But she only goes during the day because she doesn&#8217;t think it&#8217;s safe at night. The more time she spends there, the more comfortable she feels around the foreigners, she said.

On a recent afternoon, Kim Ji-yun, a 38-year-old housewife was in Itaewon shopping for a fake Louis Vuitton purse. The area is the best place in Seoul to buy knock-off brands, she said, and she usually shops there three or four times a year. But she said Itaewon is dangerous, so she always leaves before dark.

"The streets &#8230; have too many foreigners rambling around," she said. "I think the brand name shops opening lately on the main street are only a skin-deep change."

"It won&#8217;t be the same Itaewon without the U.S. troops here. They&#8217;ve contributed to the diversity and the exoticism that we enjoy so much," she said. On the same afternoon, Byun Ji-hong, 27, visited Itaewon for the first time, and his first impressions weren&#8217;t good.

"It&#8217;s scuzzier, filthier, messier and poorer than I expected," said Byun, who came to Itaewon to help a friend buy a fake Christian Dior leather jacket. His friend expected to spend about $300, compared to $1,200 for a real Dior. He said the area will become nicer when the U.S. troops leave Seoul.

But Kuk, the flower store owner, said she has grown to enjoy the mix of cultures in Itaewon.

Troops remember a place known for its vices

Land values to shoot up as Yongsan Garrison vacates