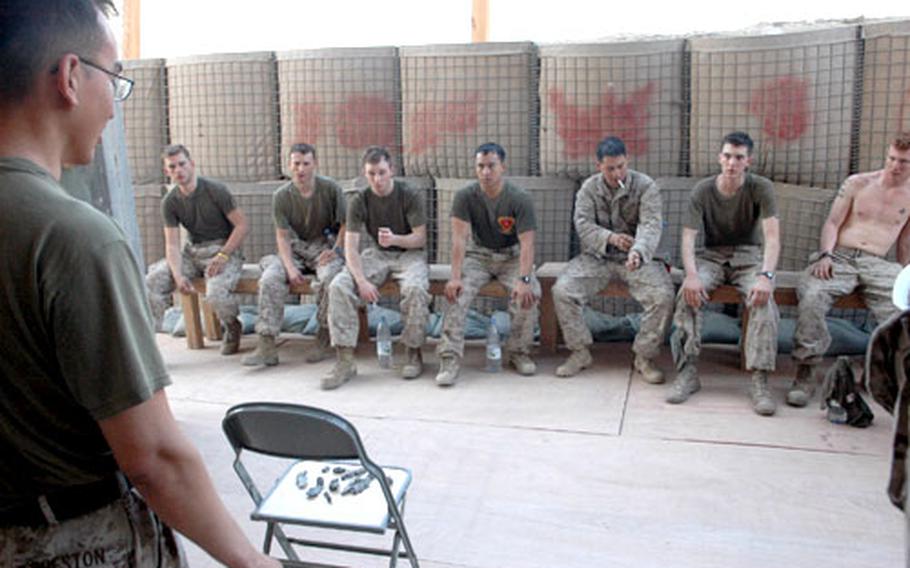 Staff Sgt. John Preston talks to a team of Marines shortly after a roadside bomb hit their patrol. He shows them pieces of shrapnel retrieved from the bomb crater. (Andrew Tilghman / S&S)

Staff Sgt. John Preston talks to a team of Marines shortly after a roadside bomb hit their patrol. He shows them pieces of shrapnel retrieved from the bomb crater. (Andrew Tilghman / S&S) 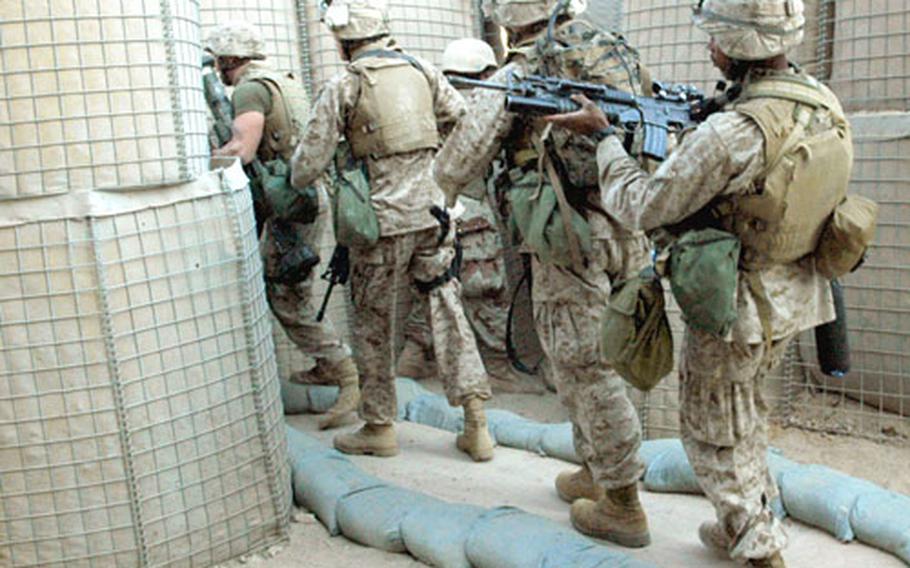 U.S. Marines stream out through the gate of OP Three just north of Fallujah after a roadside bomb hit a nearby patrol. (Andrew Tilghman / S&S)

KARMAH, Iraq &#8212; Walking back from a routine foot patrol, Lance Cpl. Matt Boggs was just outside the gate of his camp when a deafening explosion sent a plume of black smoke hundreds of feet in the air and knocked him flat.

&#8220;Then we heard tat-tat-tat-tat-tat,&#8221; Boggs said, imitating the gunfire that rained down from a nearby rooftop.

The bomb blast shattered the midday calm inside the camp here &#8212; known simply as OP Three &#8212; and sent dozens of rifle-toting Marines streaming out through the gate in the direction of the fight.

&#8220;Everybody hurry the [expletive] up, they&#8217;re taking fire,&#8221; shouted one Marine as he and others scrambled to grab their weapons and body armor.

No Marines were injured in the attack shortly after 3 p.m. It was just one of several reported across this swath of countryside north of Fallujah as troops here brace for an uptick in violence before next week&#8217;s national elections.

Three separate mortar attacks and a total of four roadside bombs were reported Wednesday in the area surrounding Karmah, a suburb of Fallujah just outside the ring of security checkpoints that surrounds the urban center.

About 200 Marines and Iraqi Army soldiers swept through a troublesome rural neighborhood north of the city here for a house-by-house search and found a small cache of grenades and automatic weapons, Marines said.

Several Marines were within range of the bomb blast that blew just as the foot patrol was passing.

&#8220;It got me mad, it made me want to just shoot everything around me. But I know I&#8217;ve got to get my composure and do my immediate action drills.

Shortly after the Marines began to return fire, the gunman on the roof of a nearby two-story building disappeared. Two young men seen running from the scene of the blast were detained for questioning.

After the Marines returned to their base, they removed their shirts and checked to make sure they had no shrapnel wounds.

&#8220;I think we need a prayer or something. We just got lucky out there,&#8221; said Lance Cpl. Andrew Sting, a lanky Ohio native, as he sat with his squad smoking a cigarette about 15 minutes after the blast.

Staff Sgt. John Preston commended squad members on their reaction to the attack.

Capt. Joel Schmidt, commander of Company G, 2nd Battalion, 2nd Marine Regiment, said it was a busy day, but no cause for concern because there were no casualties. Scattered attacks in the form of roadside bombs and mortar fire are routine threats when fighting a counterinsurgency, Schmidt said.

Pfc. Erskin Blanton, from Ohio, said the gunfire that followed the attack startled him.

&#8220;I was still tying to get past the explosion and then we started taking rounds. There were rounds going on everywhere,&#8221; he said.

He pulled from his pocket a piece of shrapnel retrieved from the blast site.

He turned to several other Marines and smiled as he rubbed the shard of metal with his finger.