It takes a con to know a con: Former criminal helps gullible tourists in Naples 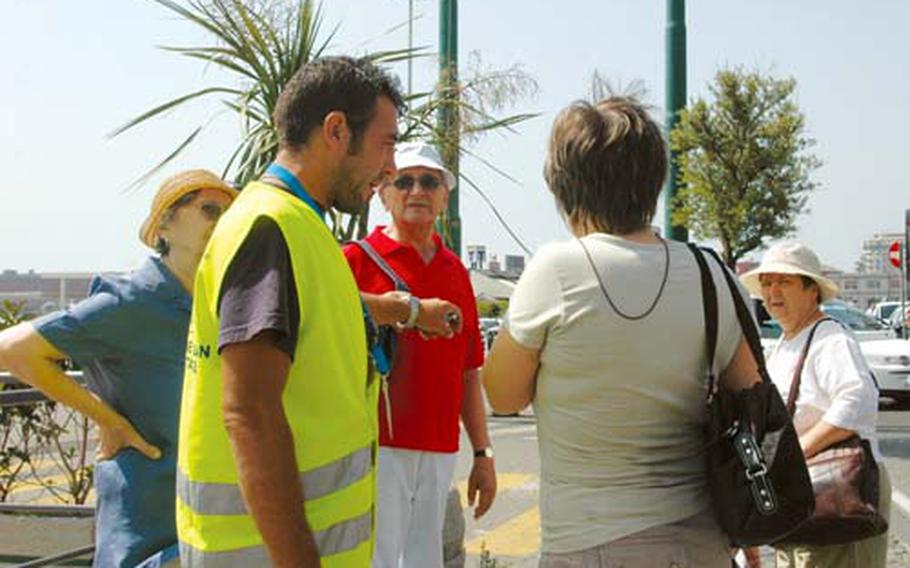 Antonio Solla directs tourists to the Beverello pier in downtown Naples. Solla and 80 other former convicts are part of an experimental program funded by the Campania regional government that hires former petty criminals to help tourists keep safe while visiting the city. (Sandra Jontz / S&S)

Tourists in Naples: Antonio Solla has your back.

He knows just how pickpockets operate and which street vendors will scam customers out of a couple hundred euros for a fake &#8220;top-of-the-line&#8221; digital camera, he said.

So, after eight years of being in and out of prisons for petty theft and scams, the 32-year-old reformed con artist decided to trade in the proverbial tee for a bright yellow vest.

Solla and 80 other former convicts are part of an experimental program funded by the Campania regional government. The former criminals, all with firsthand experience in the petty-crime business, are posted at numerous tourist hotspots in Naples to help unsuspecting travelers avoid becoming targets of crime.

From giving directions to the San Carlo opera house to admonishing tourists who wear expensive-looking watches or fail to securely tuck purses under their arms, the men of the Escodentro Project monitor tourist areas in downtown Naples.

Need a guide to steer you into the seedier parts of town, where diners will find more authentic Neapolitan cuisine? Track down the men clad in a neon-yellow vest to take you there. Heck, need an extra hand to lug your suitcase to the bus stop? They&#8217;re there for that, too.

All for free. Tourists are encouraged not to tip, said Antonio Maddaloni, who is not a former convict but was hired by the regional government as a program supervisor and tutor for the employees. The program aims to avoid the appearance of taking bribes and, according to officials, the point of the program is not to generate tips for employees.

To employees, the job is more than just lending a helping hand to tourists, Solla said. And for him, it&#8217;s more than just a job, which pays a mere 500 euros a month.

He hopes to help restore honor to Naples, which has been marred by reports of a high petty crime rates, rancid garbage that soils the streets, and organized crime that reportedly extorts protection fees from shop owners, dumps toxic waste in farmlands and saturates the area with illegal drugs.

The program&#8217;s primary goal is to reintegrate the former convicts into society and provide them honest pay for honest work, Maddaloni said.

The tourist portion of the government&#8217;s experimental plan began in June, with a contract that extends into November. Overall, the program employs 470 people, and services run the gamut, from aiding the elderly and infirm, to helping immigrants find homes and obtain legal documentation to reside in Italy, Maddaloni said.

Hannah Watson, 15, had not heard of the program before a visit to Naples last week. But mere hours into her tour of Naples, she clearly saw the benefit, citing the city&#8217;s chaos and grittiness.

Until a few weeks ago, employees of the Escodentro Project had a few run-ins with city police officers, who reportedly felt the project threatened their own jobs, according to Maddaloni and several news accounts in Italian media.

The language barrier now is the most significant hurdle the project faces, several members said. A few speak languages other than Italian, such as French, Spanish and Portuguese (which they happened to pick up through scamming and scheming in those countries), and it has proven beneficial on the job.

English, of course, would be the most helpful, they said. Beginning in October, the government will begin tutoring them in English.