It’s time to go home, but these reservists stay on 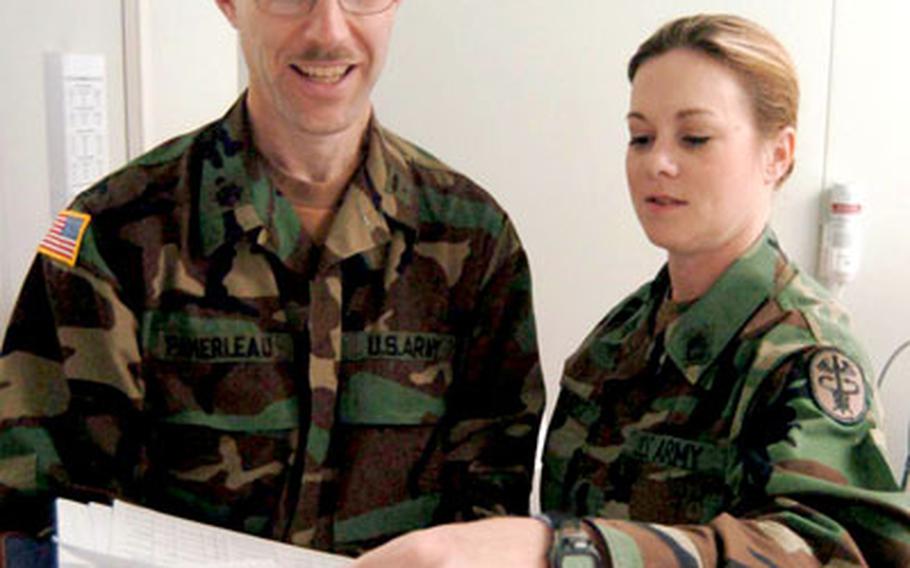 LANDSTUHL, Germany &#8212; Army reservist Lt. Col. John Pamerleau is more than halfway through his yearlong deployment to Landstuhl Regional Medical Center. He has missed birthdays, holidays and other special events to help track wounded servicemembers coming to the Army hospital in Germany from places such as Afghanistan and Iraq.

But instead of opting to reunite with his wife and 12-year-old daughter early next year, he volunteered to stay another year. It wasn&#8217;t an easy decision for his family, he admits, but he believes it&#8217;s the right one.

Pamerleau, 42, who is a physical security shift supervisor for software company Novell in Provo, Utah, isn&#8217;t the only reservist to extend.

About one-third of the more than 300 reservists at Landstuhl will add another year to their already-yearlong tours. Sixteen other reservists have agreed to stay as long as three years, hospital commander Col. W. Bryan Gamble said.

The high number of reservists at the hospital who want to stay is notable considering Army Reserve recruiters have struggled to meet recruiting goals as Iraq war casualties mount.

While many of the reservists at the hospital have not been to the front lines, they have seen the horrors of war brought to them on stretchers almost on a daily basis. Thousands of wounded servicemembers have come to the hospital for treatment, but the experience has inspired some reservists to extend.

Sgt. 1st Class Jenny Dewhurst, 36, an outpatient platoon sergeant, has talked with many of the wounded patients during her nine months at the hospital. Her interaction with the wounded convinced her to stay an additional year and ponder switching from the reserves to the regular Army.

The 328 reservists make up a fraction of the more than 1,700 Reserve and active-duty staff members at the hospital, but they play a vital role, said Gamble, the hospital&#8217;s commanding officer. Since the beginning of the Iraq war in 2003, the Intensive Care Unit has tripled in size and surgeons have performed double the number of surgeries.

The hospital would have a difficult time taking care of the wounded from Middle East in addition to patients stationed in Europe without the help of reservists, from doctors to bookkeepers. He said the number of reservists who elected to extend &#8220;tickles my heart.&#8221;

&#8220;It really, to me, cements their dedication and professionalism and devotion to the soldiers, sailors, airmen and Marines who come through here,&#8221; Gamble said.

Extending isn&#8217;t possible for everyone.

Reservists must weigh the separation from their family and career. Although some reservists, especially those who are younger, make more money deployed, many reservists do not.

There are other hardships. While active-duty soldiers stationed at Landstuhl bring their families, their cars and household goods, reservists in most cases cannot. Members of the 328th were allowed to bring only three duffle bags full of clothes and personal items. They live in base apartments or houses spread across the area and rely on a bus to take them to and from work.

Lt. Col. David Paulson said the toughest part of the deployment is being away from his wife and their four children, ages 9 through 17. He didn&#8217;t extend his assignment because the time away from his family and job as a physical therapist in Orem, Utah, would be too much.

Treating wounded servicemembers has been an extraordinary growing experience for him.

If the reservists at the hospital didn&#8217;t extend, the Army Reserve would likely find others to take their place. But reservists who extend provide some continuity and experience. Pamerleau said he felt obligated to stay instead of bringing in someone new and training them on something he already knows how to do.

&#8220;I think highly of the mission being done here, and I felt that rather than spend the money to ship somebody else over here, train them and then have them spend another year here &#8230; I mean, I&#8217;m already here,&#8221; Pamerleau said.