It’s the drink that lifts spirits 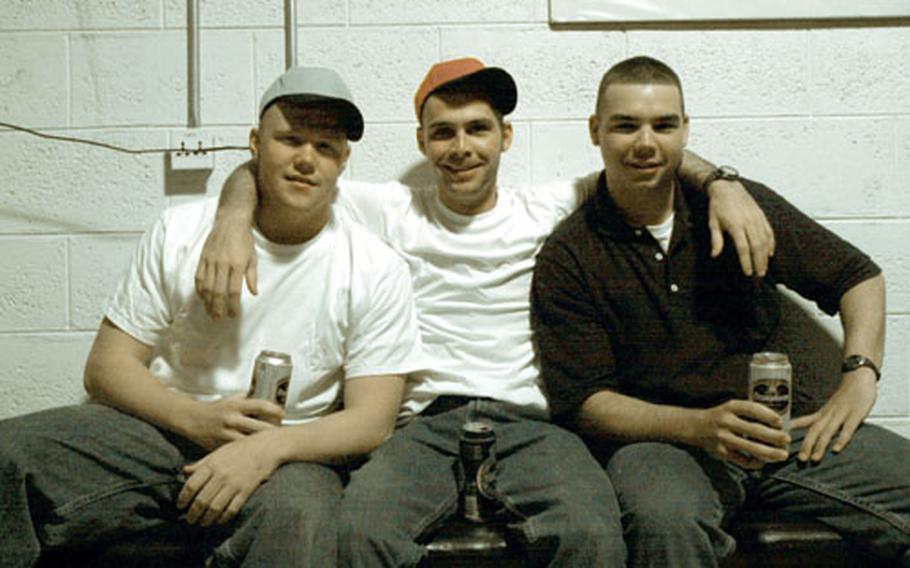 From left, Army Spcs. Jesse Greene and Robert Swanson, and Pfc. Darren "Moose" Ripley relax while having a beer during their four-day rest and recuperation trip to Camp As Sayliyah, Qatar. (Fred Zimmerman / S&S)

CAMP AS SAYLIYAH, Qatar &mdash; While the Olympic-size swimming pool is one of the main draws for the Fighter Management Pass Program, it&rsquo;s what&rsquo;s offered at the Oasis Club and the Top Off Club that have the troops really excited: ice cold beer or wine.

This is the first opportunity in months, maybe a year, that some troops have had to kick back and relax with a cold brew. And what most junior servicemembers like about it is that there&rsquo;s no bouncer at the door checking IDs.

&ldquo;Whoever thought of this is a mastermind,&rdquo; said 20-year-old Army Spc. Robert Swanson, who is assigned to the 293rd Military Police Company, which is currently deployed to Iraq.

Swanson and his fellow 293rd drinking buddies &mdash; Spc. Jesse Greene, also 20, and Pfc. Darren &ldquo;Moose&rdquo; Ripley, 19 &mdash; all like the fact that they could crack a beer every night.

&ldquo;If I can take a bullet for my country, I should be able to drink a beer,&rdquo; Greene said.

And the three soldiers have done exactly that, each one of them has been injured in Iraq, and will eventually receive a Purple Heart, Swanson said. That&rsquo;s the reason their names were put into the mix for those being sent here, they said.

&ldquo;But enough about that, let&rsquo;s talk about the beer,&rdquo; Swanson said with his thick Louisiana drawl.

The beer that&rsquo;s offered is limited. The troops have their choice between about six different beers, ranging from 12-ounce Budweisers to 16-ounce Holland &mdash; Oranjebooms.

The soldiers said they&rsquo;ve heard some people complain about the taste of the imports, but they don&rsquo;t mind.

&ldquo;It doesn&rsquo;t make a difference [what brand], as long as it does its job,&rdquo; said Swanson, who prefers the larger imports. &ldquo;Over here, everyone goes for the size, not the taste.&rdquo;

And Swanson said that first taste of golden brew was excellent.

&ldquo;It was like seeing Pam Anderson in real life &hellip; it was heaven and I couldn&rsquo;t resist,&rdquo; he said.

While troops may be in &ldquo;heaven&rdquo; while having a tall, cold one, there is a limit. Army Master Sgt. Ellie Walbridge, the Morale, Welfare and Recreation supervisor for the R&R program, lets them know what that limit is the first night here.

&ldquo;You&rsquo;ll be glad to know there is a three-drink minimum,&rdquo; Walbridge tells the troops, who reply back with cheers. Those cheers, though, quickly turn to moans when she announces &ldquo;there is also a three-drink maximum.&rdquo;

Each day between the hours of 6 p.m. and midnight, troops can go to one of the clubs and purchase up to three tickets for drinks. Walbridge said the two clubs are linked via computer and the servicemember&rsquo;s information is stored in the system so each club knows when they&rsquo;ve had their three-drink maximum.

&ldquo;I think they should extend the hours and the drink limit to five,&rdquo; Swanson said. He added that anyone that comes here who has never had a drink before would probably try his or her first here.

While the three soldiers completed their R&R time and headed back to their unit Sunday, Swanson joked that it was going to be hard to let go of his 16-ounce friend.

&ldquo;I&rsquo;m probably going to cry,&rdquo; he said. &ldquo;It will be like breaking up with a girlfriend.&rdquo;