It's raining, it's pouring on Kanto Plain 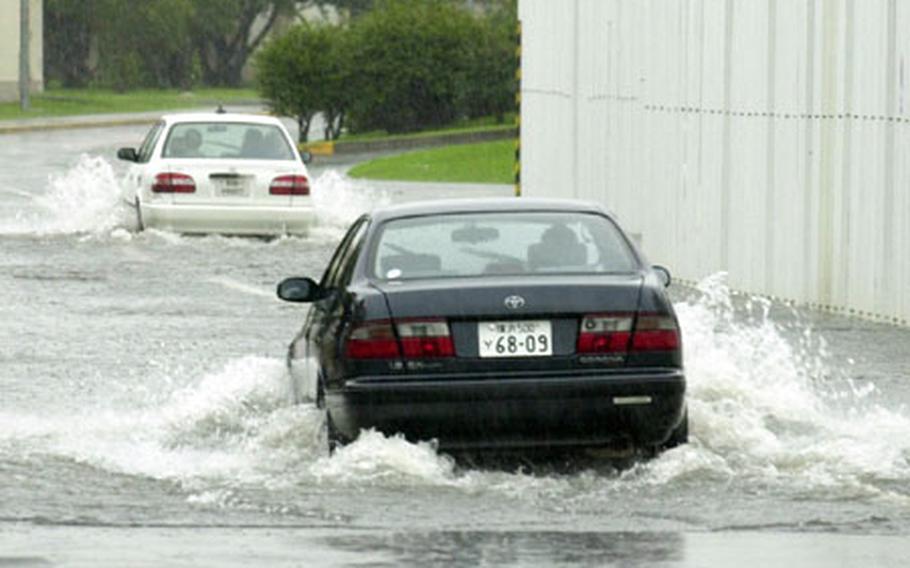 Cars drive through a flooded street at Yokosuka Naval Base, Japan, as heavy rain came down on the Kanto Plain on Friday. Rain is expected to continue into Saturday. (Jim Schulz / S&S)

With many waiting for summer to finally make an appearance, Japan&#8217;s Kanto Plain remained stuck in an unseasonably cool and wet weather pattern that&#8217;s mystified some forecasters.

Sunny skies should have been prevalent since the end of June, Harris said, and &#8220;a few more typhoons&#8221; were expected in the area.

The typical Kanto Plain rainy season is between June 8 and July 20, but this year&#8217;s session spanned June 10 to Aug. 2, according to Yoshino Ishikawa, a forecaster at the Japan Meteorological Agency.

Some clearing occurred after Typhoon Etau blew through the area a week ago, but the skies reopened over the last 48 hours.

Ishikawa said it started raining in the Kanto Plain around 11 p.m. Wednesday. Through midday Friday, 6.4 inches had fallen in the Tokyo area, with another 5.2 inches anticipated before the rain was expected to taper off about noon Saturday.

On average, Ishikawa added, the Kanto Plain receives 6.5 inches of rain each July and 6.2 in August. The July figure rose to 7.5 inches this year, and the area already was soaked with 5.3 inches in August through Thursday.

Thursday&#8217;s high temperature in the Kanto area was 73 degrees, nearly 15 degrees lower than the average for that date, Ishikawa said.

While the steady rainfall hasn&#8217;t severely affected operations at Kanto-area military installations, it&#8217;s been a nuisance, if nothing else.

Zama officials said the base was largely spared of localized flooding.

Atsugi&#8217;s operational tempo was unaffected Friday, base spokesman Brian Naranjo said, but earlier in the day, water backed up in a drain at the corner of King and Ranger streets. Traffic was not delayed.

Yokosuka officials said there were no work disruptions there, either. Still, 1.34 inches of rain fell Thursday and another 4 inches had come down by noon Friday, weather center officials said.

Friday operations remained at a normal level on Yokota Air Base, which has experienced problems in the past with water runoff into off-base crops and fields. During last week&#8217;s typhoon, a main road on the base&#8217;s north end had to be shut down due to the heavy rainfall.

&#8220;Unlike the typhoon, though, where it rained hard for a short time, we&#8217;re getting a lot of rain over a long period. Security forces and [civil engineering] are remaining vigilant. We&#8217;re keeping an eye on the situation, but things are fine right now as far as base operations go.&#8221;

Forecasters predict a clearer weather picture in the coming week, with mostly to partly cloudy skies from Sunday to Tuesday, Harris said.