It's official: Kitty Hawk, Cowpens, McCain will be heading home Petty Officer 3rd Class Earnest Harris, 21, a machinist&#39;s mate from Littleton, N.C., speeds up the generator in the No. 4 main machinery room on Saturday evening on the USS Kitty Hawk. He said he is looking forward to some quite as the carrier prepares to return to Japan. (Kendra Helmer / S&S)

Petty Officer 3rd Class Earnest Harris, 21, a machinist&#39;s mate from Littleton, N.C., speeds up the generator in the No. 4 main machinery room on Saturday evening on the USS Kitty Hawk. He said he is looking forward to some quite as the carrier prepares to return to Japan. (Kendra Helmer / S&S) 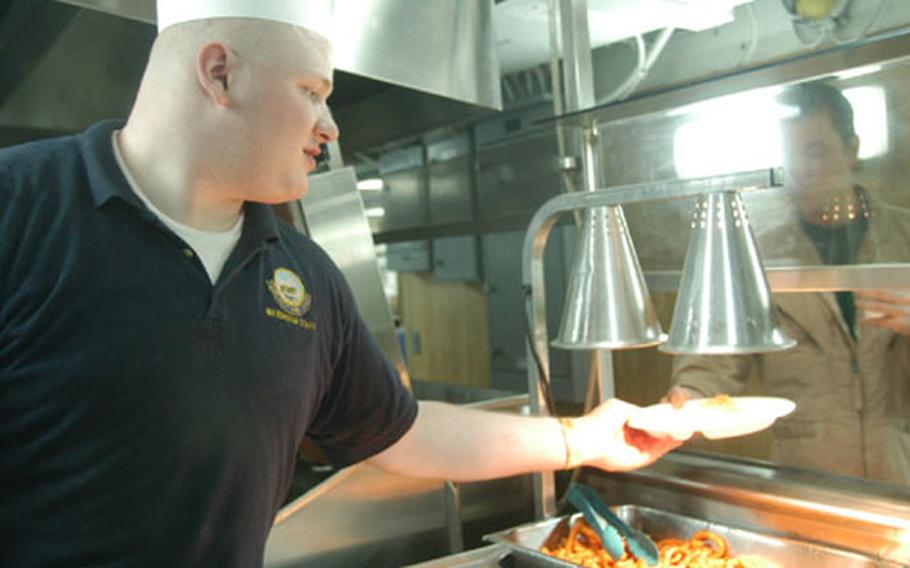 On Sunday, it became official. The aircraft carrier has orders to leave the Persian Gulf and steam home for Japan after 80 straight days at sea.

Two more Yokosuka-based ships, the USS Cowpens and USS John S. McCain, also have orders to head home, while two more, the USS Vandegrift and USS Gary, will remain in the Persian Gulf area of operations.

But Parker also had some sad news for the crew. He announced the Navy has identified the remains of an F/A-18 Hornet pilot missing since he was shot down April 2.

The body of Lt. Nathan D. White, 30, of Abilene, Texas, was found Saturday. He was a pilot with Strike Fighter Squadron 195.

Central Command said a coalition Patriot missile may have shot down the Hornet. The incident is under investigation.

Parker said it has been a bittersweet deployment. Carrier Air Wing 5, embarked on the ship, also lost a plane, an F-14 Tomcat, during the war.

&#8220;The good news is, we got the crew back,&#8221; he said of the two pilots who walked away unscathed after their F-14 suffered mechanical failure.

The air wing has flown about 2,000 combat sorties since the war started and, Parker said, won&#8217;t be doing much flying on the homeward journey.

The 5,500 sailors on board have been talking for days about heading back to Japan. Besides getting back to loved ones they haven&#8217;t seen since Jan. 20, sailors are buzzing about a port call.

Parker said the ship needs to return to Japan for a yard period that could take three to five months. He warned sailors in his daily address that it&#8217;s possible the carrier will head straight home and not hit a port.

Petty Officer 3rd Class Charise Cunningham, 21, also is hoping for a stop on the way.

Like other sailors, she&#8217;s saved thousands of dollars, thanks to hazardous-duty pay, sea pay and the tax-free status in a war zone.

Petty Officer 3rd Class Earnest Harris, 21, just wants a break from working on a turbine generator in the main machinery room. Harris works 16 hours a day in the room, which has two boilers that raise temperatures as high as 110 degrees.

Harris, who has seen fellow sailors pass out on the hot job, is hoping for a port call in Australia.

Parker is also hoping for a port call.

Another servicemember on the carrier was heading off before the rest of the crew, but his job isn&#8217;t over.

He&#8217;s been hoping his mail would catch up to him, something that hasn&#8217;t happened since he left his base in Mannheim, Germany. It missed him in Kuwait, and he was leaving the Kitty Hawk empty-handed.

&#8212; Kendra Helmer was embedded with the USS Kitty Hawk.

ABOARD THE USS KITTY HAWK &#8212; The Navy has identified the remains of an F/A-18 Hornet pilot assigned to the USS Kitty Hawk and missing since his plane was shot down April 2, according to the aircraft carrier&#8217;s commanding officer.

He was a pilot with Strike Fighter Squadron 195, the Dambusters. He is survived by his wife and three children.

Central Command has said a coalition Patriot missile may have shot down the Hornet. The incident is under investigation.

The fighter was shot down around 11:30 p.m. on April 2, and coalition forces, hoping the pilot had survived, conducted an extensive search and rescue mission.

The air wing is based at Atsugi Naval Air Facility, Japan, and is embarked on the Yokosuka, Japan-based carrier.