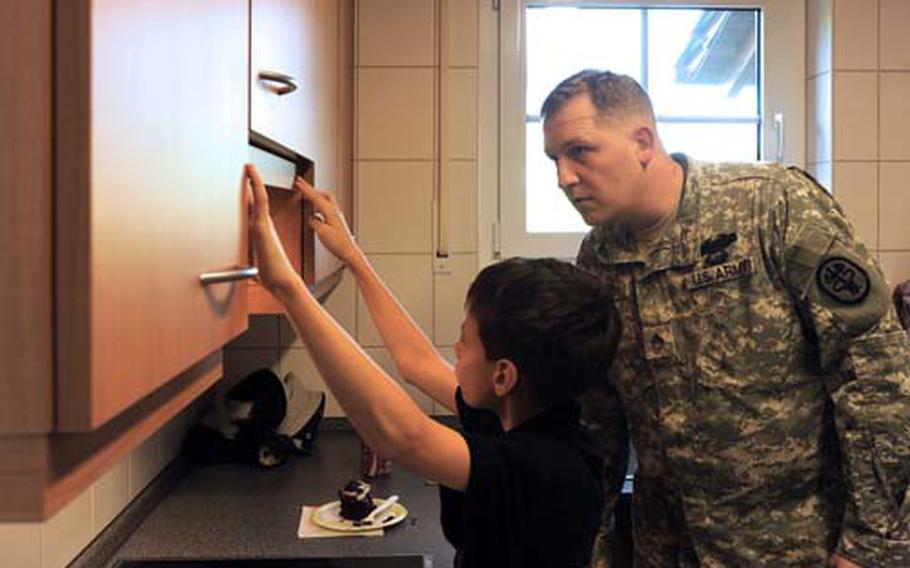 Staff Sgt. Samuel Loague and his son, Alex, check out the kitchen of their new house on Ramstein Air Base on Nov. 18. The Loague family moved into the house the next week. (Michael Abrams / S&S)

Staff Sgt. Samuel Loague and his son, Alex, check out the kitchen of their new house on Ramstein Air Base on Nov. 18. The Loague family moved into the house the next week. (Michael Abrams / S&S) 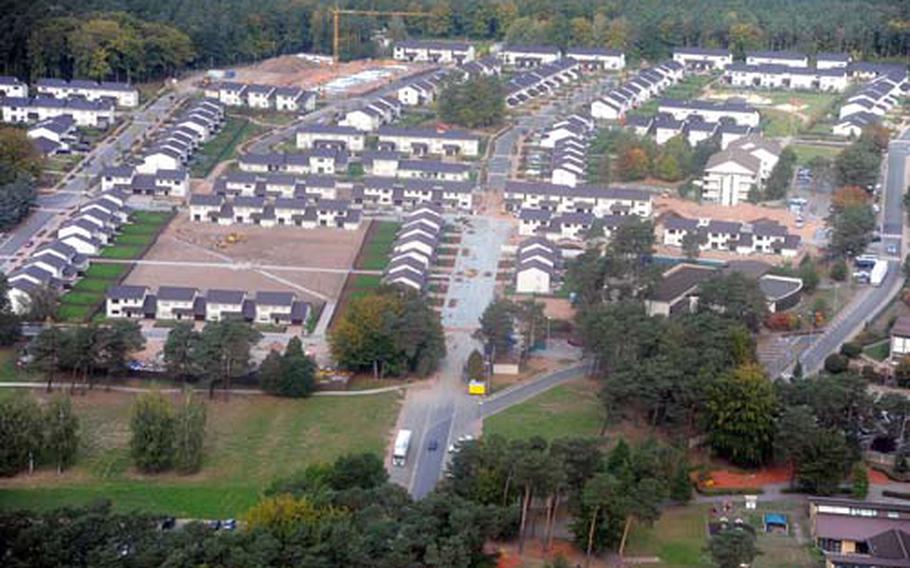 An aerial view of the Ramstein Air Base family housing area in early October. The four houses at lower left were recently finished and families will started moving in the days before Thanksgiving. Many new houses have been built, and more are under construction as Ramstein replaces multiple stairwell houses with townhouses. (Michael Abrams / S&S) 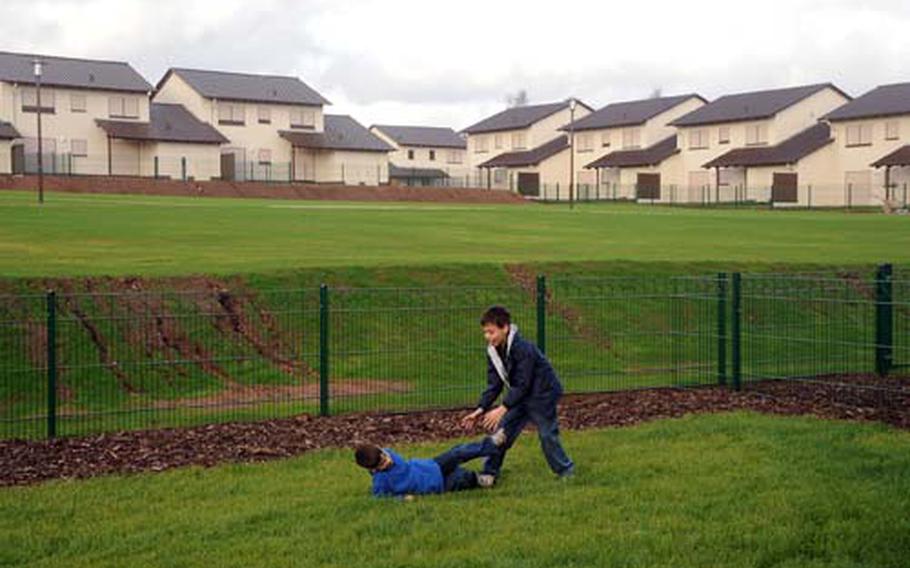 Austin, left, and Alex Loague play on the lawn behind their new house on Ramstein Air Base. In the background are more new townhouses that are being readied for occupancy. (Michael Abrams / S&S)

RAMSTEIN AIR BASE, Germany &#8212; Since moving to Germany this summer, the Loagues were content in their off-base house in Bann, southwest of Kaiserslautern.

But quite unexpectedly, the phone rang in November presenting the family of four an offer they couldn&#8217;t refuse &#8212; housing on Ramstein Air Base.

"When we saw it was a town home, it was pretty much a done deal," said Army spouse LeTicia Loague. "It&#8217;s very convenient, obviously, for all the amenities it has to offer."

The Loagues and their new Air Force neighbors, Senior Airman Justin Gann and his family, are among the lucky ones: They were on the waiting list for base housing less than six months.

That&#8217;s no time at all to wait for the keys to a military home at Ramstein. The expected waiting period is as long as 30 months for some housing categories at bases in the Kaiserslautern area.

Unlike some Air Force bases in Japan, which require incoming families to live on base to reduce vacancy rates and save money, base housing is a valued commodity in Kaiserslautern for its proximity to schools, work and shopping, and the security of life in a gated community.

In early November, more than 800 families were on the waiting list for housing on Ramstein, Vogelweh and Landstuhl. The category with the most applicants &#8212; 171 at the time &#8212; was senior noncommissioned officers in need of three bedroom units. The wait in that category for Vogelweh was an estimated four to six months; 22 to 24 months at Ramstein; and 21 to 24 months at Landstuhl. Most Air Force tour rotations last 36 months.

Making that list even longer is an ongoing housing overhaul at Ramstein and Vogelweh, which is making housing more enticing and harder to get.

The $843 million construction project, rolled out more than five years ago to build 655 new town homes on the two bases and renovate 225 stairwell apartment units, is intended to improve the quality of base housing and meet government standards.

To make way for the more spacious three- and four-bedroom town homes, each with a fenced-in yard, outdoor patio and single-car garage stall, the Air Force tore down hundreds of 1950s-era stairwell apartment units.

To do so, however, the Air Force is cutting back on quantity. When the construction crews go home &#8212; the project is expected to finish by summer 2011 &#8212; the number of available military housing units in the Kaiserslautern area will shrink from 5,600 units to 1,741.

The Air Force has the wiggle room to reduce base housing by 69 percent, it said, because of a boom in off-base housing construction over the last decade. As of last month, the U.S. government was supporting 10,500 housing leases for military personnel and civilians living in some 300 villages in the Kaiserslautern area, Air Force officials said.

Between 255 and 300 rentals also were vacant, officials said.

In determining how much housing to provide on base, the service follows Air Force and Defense Department guidance that says "rely on the community first to provide adequate and affordable" family housing.

Of those who have been able to move into a new or renovated unit on base, "the feedback that I&#8217;ve heard is good," Moore said.

Benjamin Hizon, deputy director of the Kaiserslautern Military Community housing office, said what he keeps hearing is this: "I want a town house."