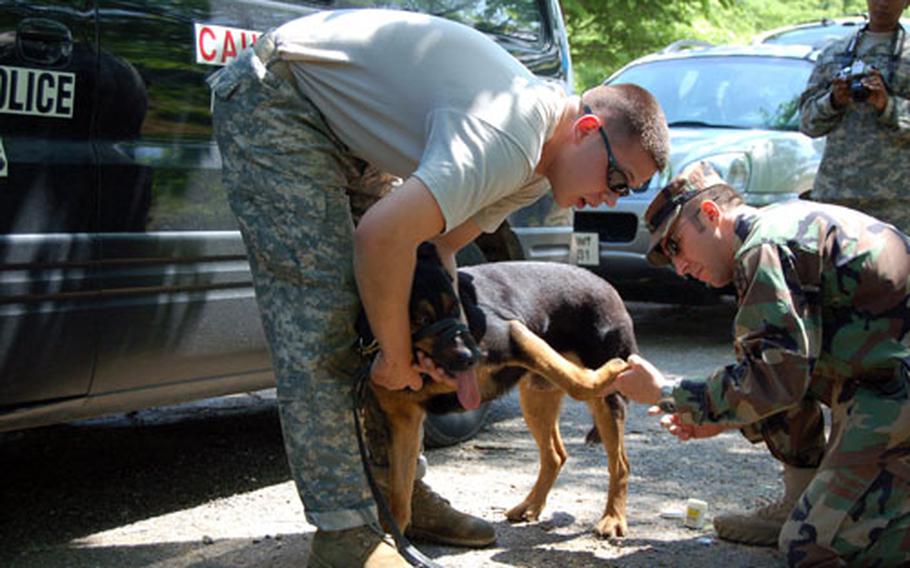 Sgt. Christopher Jasper holds a leash around his German shepherd, Argo’s mouth to prevent him from biting while veterinarian Capt. Nic Cabano treats a wound to his paw during the 4th Annual U.S. Forces Korea Military Working Dog Competition. The course was one event in the three-day competition held at Everland. (Jimmy Norris / S&S)

Sgt. Christopher Jasper holds a leash around his German shepherd, Argo’s mouth to prevent him from biting while veterinarian Capt. Nic Cabano treats a wound to his paw during the 4th Annual U.S. Forces Korea Military Working Dog Competition. The course was one event in the three-day competition held at Everland. (Jimmy Norris / S&S) 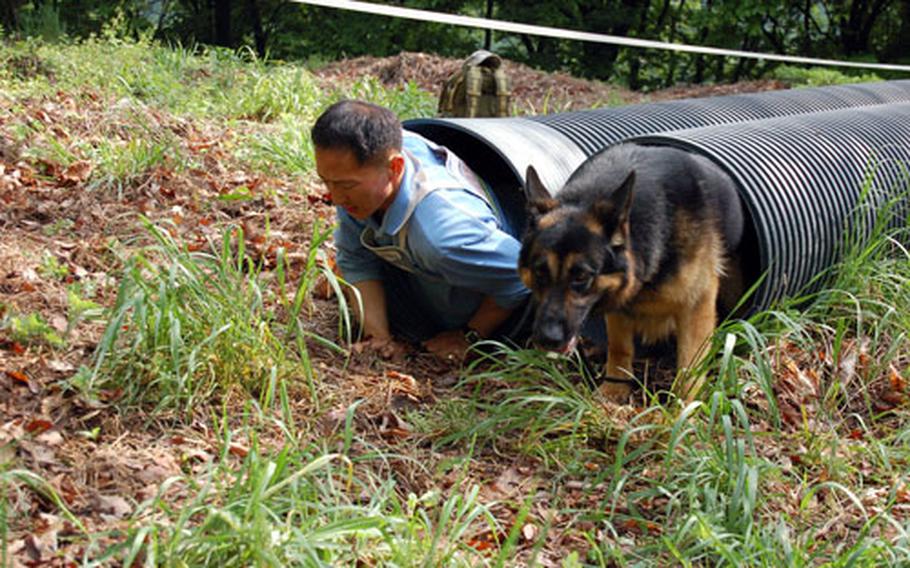 Lee, Min-gyun and German shepherd Kunm-kang, Samsung Search and Rescue, emerge from one of the obstacles on the fitness and endurance course. (Jimmy Norris / S&S)

What does it take for a dog to bite, maul, sniff and search his way to glory? Big teeth and a sharp nose are just the beginning, officials say.

They&#8217;re checked for possible hip and elbow conditions that could lead to health problems later in life. They&#8217;re also checked for temperament &#8211; shyness, obedience, aggressiveness; too much or too little of any of these traits can disqualify a dog from working as a detection or patrol dog.

Officials said it can take between one-and-a-half to three years to prep a dog for work with civilians or the military.

Once it&#8217;s trained in the basics, it has to build a bond with its handler.

Military working dogs must rebuild this bond several times during a career as handlers move between duty stations.

Many handlers say that leaving dogs behind is often difficult for both the handler and the dog.

According to McLean, a dog&#8217;s best working years are when he&#8217;s between 4 and 8 years old. At about 9 years old, the dog is considered for retirement.

McLean said the training military dogs receive often leaves them too aggressive to be used as pets after retirement. Instead many are euthanized.

He added that about 40 percent can be rehabilitated after a lengthy medical and behavioral clearing process.

But in most cases, McLean said, it&#8217;s best when trained dog handlers adopt the dogs instead of members of the general public.

Samsung also puts retired dogs up for adoption, as well as puppies deemed unfit to serve as working dogs. Choi said many of the dogs are available to U.S. Forces Korea personnel and anyone interest can call him at 82-31-320-8932 or e-mail at johnkh.choi@samsung.com.

&#8212; Jimmy NorrisSouth Korean Air Force Sgt. Lee Byung-chae and Tea-su, his German shepherd, didn&#8217;t place in the top three in any of the events they competed in last week.

But they still earned a special award for consistently placing fourth or fifth, often losing by a very small margin.

Event coordinator Master Sgt. Andrew Baxter said the team&#8217;s performance was impressive given that none of the South Korean military working dog teams had more than six months of experience with their dogs and they were competing against teams with several years of experience.

Building rapportBarco &#8212; a 7-year-old German shepherd &#8212; had a rough beginning to his career as a military working dog.

Officials were getting ready to take Barco out of the program when Sgt. Joshua Brown arrived at the unit.

Different stylesJohn Choi, manager of the Samsung dog program, said there are some differences in the way the dogs are trained in the United States compared with South Korea.

U.S. military working dogs are trained to sit or stand at the spot where they&#8217;ve discovered something suspicious, but they may look back at their handlers, Choi said.

Korean dogs, however, are trained to stare directly at the find, he said.