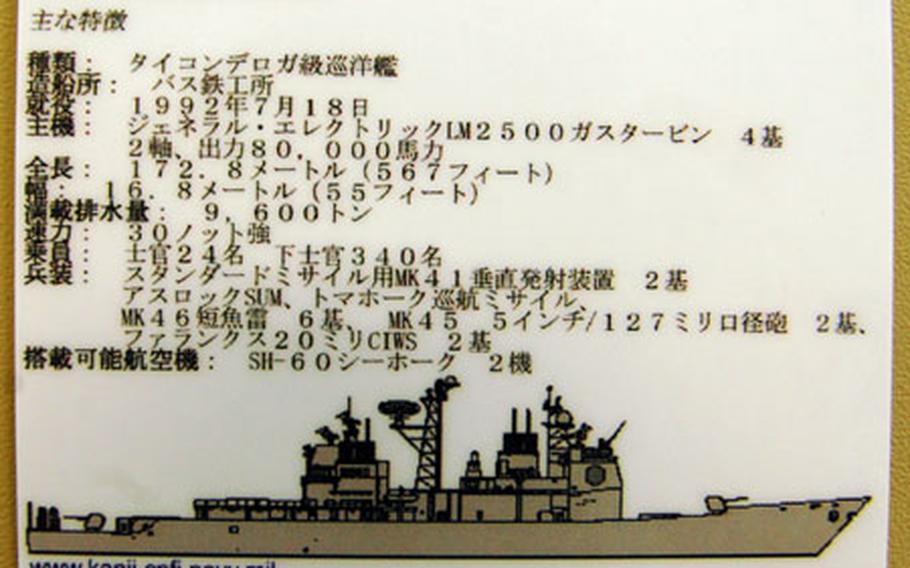 The reverse side of the USS Shiloh card. (Chris Fowler / S&S)

The reverse side of the USS Shiloh card. (Chris Fowler / S&S) 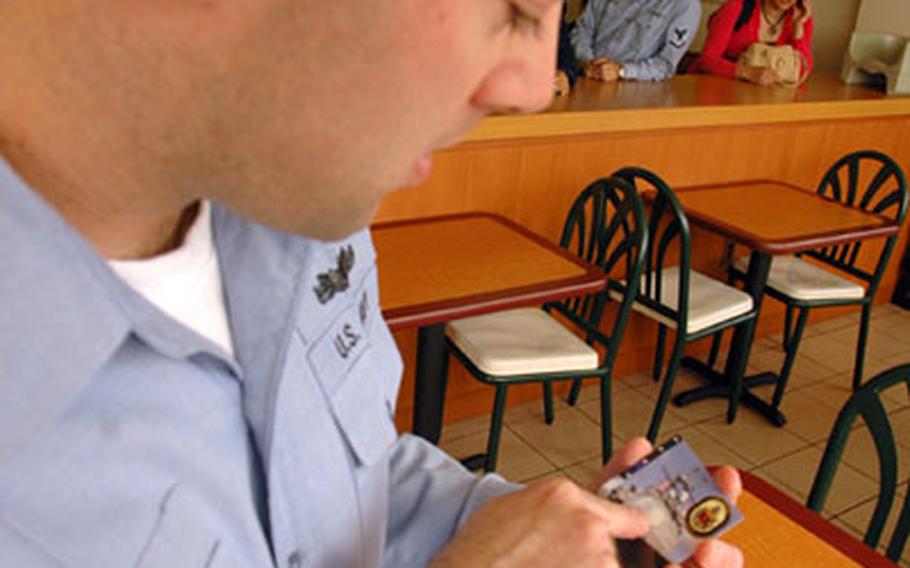 “Hey there’s my radar!” Petty Officer 1st Class Troy Woods points out the fire control radar he works on for USS Shiloh’s ballistic missile defense system on a collectible U.S. Navy trading card. The cards are part of a community relations project being spearheaded by Commander, Naval Forces Japan, Public Affairs. More “series one” cards are scheduled to be handed out during the next scheduled open base slated for June 3 at Yokosuka Naval Base. Series Two is on the drawing board. (Chris Fowler / S&S)

But even he was surprised when he first saw the baseball-style trading card featuring his ship.

Woods wasn&#8217;t alone in coveting the Shiloh card. One of his shipmates, Petty Officer 1st Class Toni Pendergraft, thought the card had a certain charm as well.

What Pendergraft didn&#8217;t know was that a lot of people have already collected them.

Japanese families who arrived early enough to the recent Cherry Blossom festivals at Yokosuka and Naval Air Facility Atsugi were each given a pack of three cards.

Designed and paid for by Commander, Naval Forces Japan public affairs, the cards are intended to communicate to the local public a better understanding of the Navy&#8217;s forward-deployed units and bases in Japan, CNFJ spokesman David Waterman said.

&#8220;We decided to try using trading cards to reach an audience beyond that of the more traditional and mainstream media,&#8221; he said.

The cards so far appear to be a hit, if not a grand slam.

&#8220;The limited edition cards were immediately snapped up,&#8221; Waterman said of what was handed out at Yokosuka and Atsugi festivals. &#8220;People began to go back out to the gates to ask for their own packs.&#8221;

The first series was so popular that CNFJ said a second series, which will expand to include other ships, squadrons and commanders, has already been commissioned. The series has been printed twice, and each run consisted of 1,500 cards.

The cards have been so popular that the Navy&#8217;s highest public affairs authority, the chief of Navy information, has asked to check them out for even further use.

But because the cards are designed to inform Japanese about the U.S. Navy, they are not available to U.S. servicemembers, SOFA-sponsored civilians or contractors, Waterman said.

The cards, written in kanji, do not come with chewing gum, but they do have the look and feel of an authentic baseball card, complete with a picture on the front and corresponding facts and figures on the back. Currently, the complete series contains 15 cards.

The Babe Ruth of the first series features Commander, U.S. Naval Forces Japan, Rear Adm. James Kelly. Other cards feature the commanding officers of Yokosuka, Atsugi, Sasebo, Misawa and Okinawa, as well as the aircraft carriers USS Kitty Hawk and USS George Washington, which is to be based at Yokosuka next year.

Besides Yokosuka and Atsugi, Waterman said, cards also are being distributed to Sasebo, Misawa and Okinawa.