It's a whole new world for guardsmen and reservists, no longer 'weekend warriors' 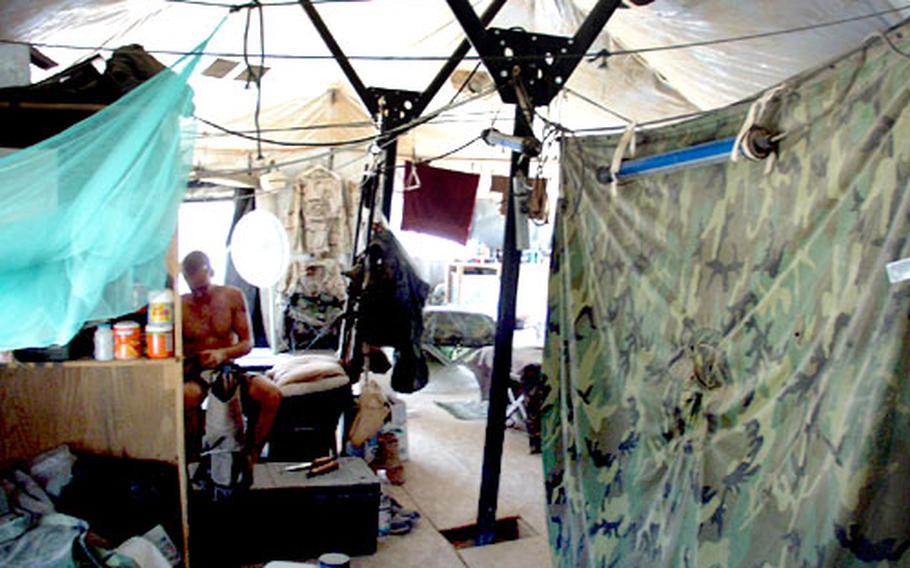 Reserve soldiers assigned to Camp Bucca, an enemy prisoner-of-war camp in southern Iraq, live in tents like these. They did not have air conditioning. (David Josar / S&S)

Reserve soldiers assigned to Camp Bucca, an enemy prisoner-of-war camp in southern Iraq, live in tents like these. They did not have air conditioning. (David Josar / S&S) 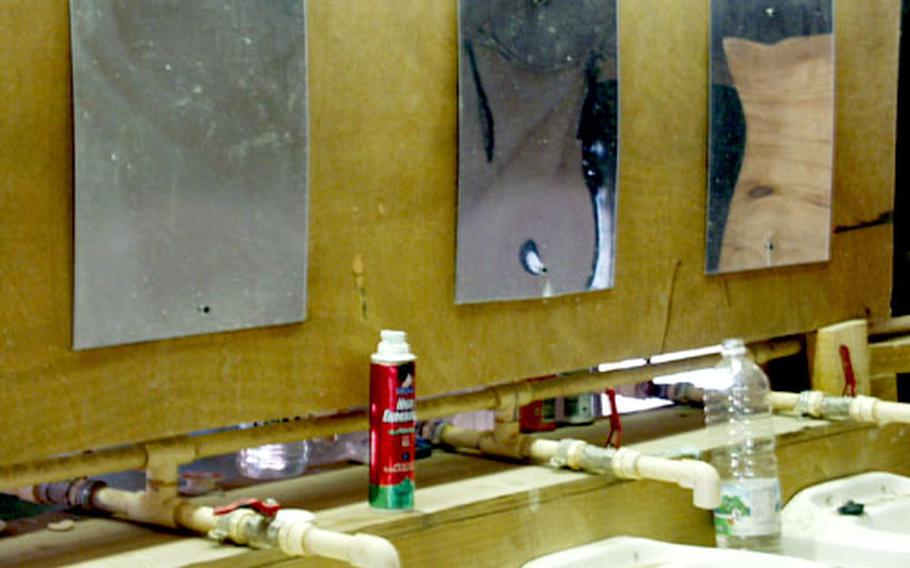 Reservists at Camp Bucca, in southern Iraq, used shaving stations like this in tents that reached as high as 150 degrees inside. (David Josar / S&S) 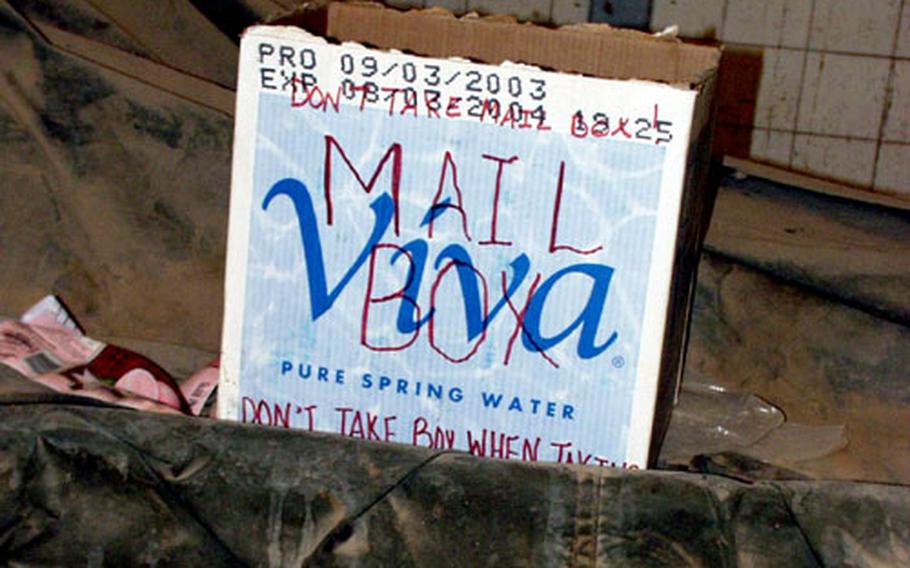 A makeshift mailbox sits in a warehouse where the 372nd Military Police Company, a reserve unit from Cumberland, Md., lives in Hillah, Iraq. (Marni McEntee / S&S)

The terrorist attacks on Sept. 11, 2001, ushered in a new world for members of the Reserves and National Guard.

They already were used to an occasional six-month tour in the Balkans, but now the part-time soldiers found themselves being called repeatedly away from home for back-to-back-to-back deployments that some of them say they weren&#8217;t specifically trained to do.

Military leaders said this is the new world for America&#8217;s reservists and guardsmen. Now they will be called upon to not only protect their home states, but to also combat terrorism overseas.

The new world will mean serving more than just one weekend a month and two weeks a year.

The days of the &#8220;weekend warrior&#8221; are gone, said Thomas F. Hall, assistant secretary of defense for Reserve Affairs, in a recent interview, according to a transcript distributed by American Forces News Service.

That shift may have caught some weekend warriors unprepared.

Lt. Gen. H. Steven Blum, chief of the National Guard Bureau, which oversees all reserve forces, told The Associated Press last week that he expects the total of reservists and guardsmen on active duty for the war on terrorism to remain above 100,000 for the next two years.

About 42,000 of the roughly 160,000 American troops in Iraq are members of the Reserves and National Guard, according to U.S. military leaders in Baghdad attached to the headquarters element. As of Oct. 3, 52 had died in the Iraq war.

Stripes surveyed nearly 2,000 American troops across Iraq, hundreds of them from the Reserves and National Guard. Many are angry and confused. They are unsure of their mission or when they will go home. Some are disappointed in their commands, and a significant number are disillusioned about how they&#8217;ve been treated.

Army Staff Sgt. Russell R. Wert is representative of the growing divide between active-duty servicemembers, and reservists and guardsmen.

Wert and other guardsmen from the 157th Military Police Company from Martinsburg, W.Va., have been home just four months since Sept. 11, 2001.

For Nouse, who has 21 years of military experience, Iraq has been his second deployment since Sept. 11, 2001, and he has seen his wife and daughter for only four months since then.

There probably will be a drop in the number of people who serve in the military, but that isn&#8217;t unanticipated, said Army Lt. Col. David Stark, a guardsman brought specifically to Baghdad to address reservist and guardsmen issues.

But he also predicts the exodus of men and women from the reserve and National Guard ranks may not be as severe as soldiers in the field suspect.

Surveys and interviews of reservists and guardsmen showed some common complaints. Among them:

&#182; The most disheartened troops appeared to be those who had been activated repeatedly since Sept. 11, 2001. They do not know why they must take on more of the burden while other units remain at home or are not called to serve.

&#182; Reserve and National Guard troops said that because they are so confused about how they are treated, they spend parts of their days trying to ferret out what istruth and fiction about the military in Iraq.

One misperception is their commanders volunteer them for additional missions that prevent them from going home and which could be done by other units. The reason, the soldiers said, is greed. Their leaders, especially in military police units, already draw police pensions in addition to their active-duty pay.

Stark, who has heard the same gripe, said it is patently untrue and calls that scenario an &#8220;urban folktale.&#8221;

&#182; They are treated differently than active-duty military personnel.

National Guard units say at times during the recent deployment to Iraq, they have been regulated to different bathrooms and medical care. One unit was so poorly supplied it asked hospitals in the United States to donate medical supplies. Other units said they were asked to get by on two bottles of water a day so regular Army units could have more bottles.

They also receive different insurance coverage for their families than their active-duty counterparts. Senate Minority Leader Thomas A. Daschle (D-S.D.) is seeking $400 million a year to extend the Pentagon&#8217;s health insurance program to activated guardsmen, reservists and their families. Reservists and guardsmen also have older radios and other electronic equipment.

&#182; Reserve and National Guard units with training in one area are repeatedly forced to work in fields for which they weren&#8217;t trained.

&#182; Active-duty units have been told they must serve a one-year tour. National Guard and Reserve troops are being told to plan on two years of service, which is the amount of time they can be activated for one mission, Stark said. &#8220;Stop-loss has not been lifted for us, but it has been for the active component,&#8221; complained a 37- year-old guardsman at Camp Warrior. Leaders are told not to give dates to return home until they are definite, Stark said. &#8220;Changing the date someone can go home is more devastating than knowing you will have to stay longer,&#8221; Stark said. &#8220;When you have that go-home date, you can plan for it and mentally use it.&#8221;

Stark did not disagree with any of Stripes&#8217; findings, and he noted that most of the troops&#8217; concerns were similar to those aired last month with he met with the commanders of military police companies, the majority of which are culled from Reserve and National Guard ranks.

&#8220;It is hard,&#8221; Stark acknowledged, and the military is working to make the deployments more bearable.

&#8220;The National Guard is and will continue to be used at a rate that is unprecedented&#8221; in the 30-year history of the all-volunteer military, Blum said.

Transformation of the military should help, though, said Stark.

For example, he said, military police and civil affairs units have been repeatedly tasked in the Balkans, Afghanistan and now in Iraq.

Those units already had been understaffed and hard to staff in the standing military, and perhaps with a shift in the way the military is staffed those shortages &#8212; which lead to the long, repeated deployments for reservists &#8212; could be stopped, he said.

In addition to a rebalanced force, Hall said he believes the future will include a more flexible drilling schedule. Instead of the traditional weekend drill, there could be two two-week training periods a year, he said.

The Department of Defense also is looking to create a more predictable rotation schedule.

Those changes, though, are months if not years away, and the present reality resonates with soldiers like those in the 372nd Military Police Company, a Reserve unit from Cumberland, Md., which is living inside an abandoned date factory in southern Iraq outside Hillah.

The soldiers have been there for three months. They have no Internet service, and the only way to call home is to pay $1.25 a minute to a local Iraqi who is operating a satellite phone concession on the camp.

The 372nd does not have a mess hall, uses jury-rigged showers and has no post exchange. The abandoned warehouse they call home, which is no better or worse than that of &#8220;regular&#8221; Army soldiers, has no air conditioning and intermittent electricity.

The reservists, who have put aside law school, families and their civilian jobs, are questioning why they are here.

&#8220;Our mission is now almost over, our relief is here, but nobody in the chain of command knows anything of our status,&#8221; said Sgt. Stephen J. Pierson, a 42-year-old military police officer.

Committed to leaving the military, driven in part by his Iraq experience, is Army Spc. Chris Wallace, 31, of the 157th MP Company, out of Martinsburg, W.Va., who is a lumber company manager when not activated.

Wallace has been deployed for more than 600 days in the last two years. Now he lives with his company in an old building on Camp Edson, a former Iraqi university about a two-hour drive south of Baghdad.

There is no air conditioning, soldiers do laundry in buckets and they have little downtime from their police duties. They took up a collection to buy a refrigerator. The mail takes about a month to get there or to arrive at its destination stateside. Their mailing address has changed three times, which leads to the slow mail problem.

&#8220;Services may get better, but we want to leave before they get better,&#8221; Wallace wrote as he completed a Stars and Stripes survey.

His unit was deployed in June 2001 to Fort Benning for training, and then had three weeks home in southern West Virginia. He was then home for a month and activated for a full year to Fort Benning, Ga., to do homeland security duty under Operation Noble Eagle.

He was home for three months before being activated again Feb. 15 for Operation Iraqi Freedom.

Wallace complained that his unit is &#8220;well below readiness standards&#8221; due to the constant deployments. He talked about the reasons behind the high-deployment rate, saying: &#8220;The MP Corps is decimated Armywide.&#8221;

The senior leadership of the U.S. military was not ready for the occupation of Iraq, said Army Sgt. 1st Class John Boyd Jr., also a from the 372nd MP Company. &#8220;I strongly believe that the current administration is more concerned with re-election politics and less on doing the right thing,&#8221; said Boyd, a reservist. &#8220;After this whole ordeal is over, I think you will see the ranks of the Army Reserve decimated.&#8221;

Helmly told The Associated Press that intuition would suggest that recruiting would be harder now, though statistics don&#8217;t bear it out yet.

Not to be underrated

A remaining sticking point is the perception that the Guard and Reserve are not the &#8220;real Army&#8221; and consequently are treated differently.

When National Guard troops were attached to the 1st Armored Division, for example, they had to eat breakfast meals for dinner while 1st AD troops had evening meals of beef steak and pork chops, claimed one soldier.

But that perception may fade over time.

A sergeant first class who is a 19-year veteran of both active duty and Reserves offered some advice: &#8220;Everybody needs to learn how to work together, because every war we&#8217;re using more and more Guard and Reserve. People who have the experience should be available to use that experience and help out whenever they can.&#8221;