It's a long climb up to work down in the bubble 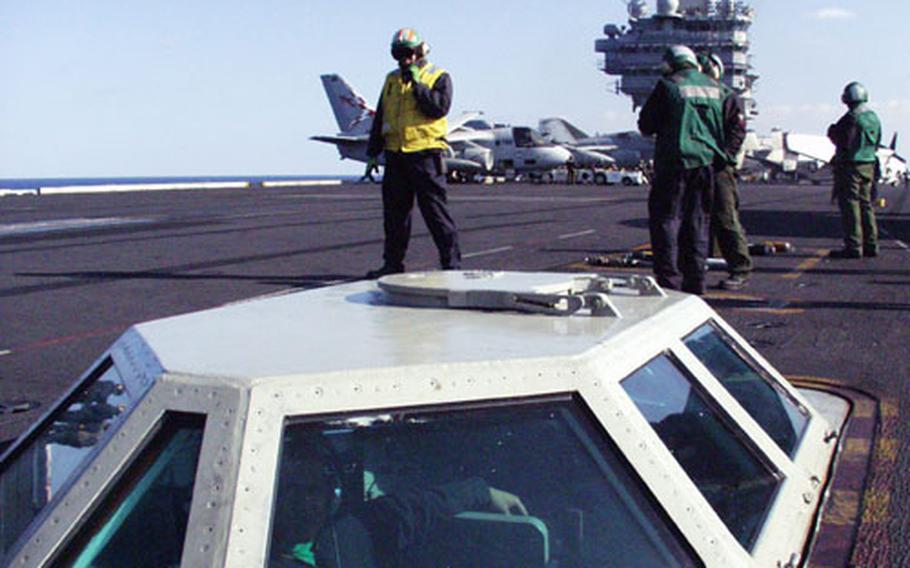 There are two bubbles on an aircraft carrier that rise up from below deck. (Kendra Helmer / S&S)

There are two bubbles on an aircraft carrier that rise up from below deck. (Kendra Helmer / S&S) 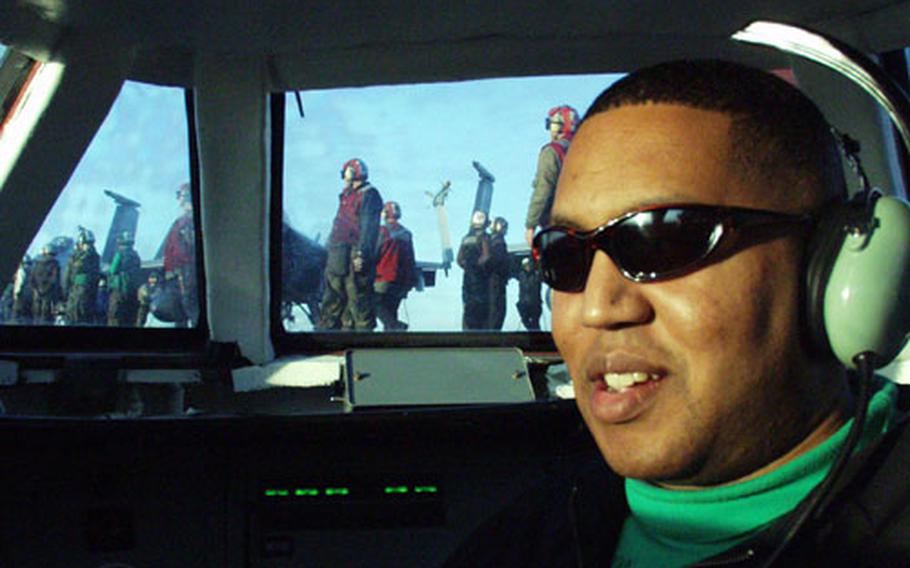 Petty Officer 1st Class Fredrick Patton, a catapult safety monitor, has a view of all the flight deck action from his workspace in the bubble on the USS Harry S. Truman. (Kendra Helmer / S&S)

ABOARD THE USS HARRY S. TRUMAN &#8212; While helmet-clad sailors swarm about the flight deck wearing earplugs to soften the deafening noise, Petty Officer 1st Class Fredrick Patton has a sweet view of all the action.

Patton is one of a handful of the aircraft carrier&#8217;s 5,500 sailors and Marines who work in the Integrated Catapult Control Station &#8212; known as &#8220;the bubble.&#8221; The ship is currently in the eastern Mediterranean Sea on a six-month deployment.

Patton squeezes into the cramped space from below deck. After bolting the hatch, the bubble, like an elevator, rises a couple of feet above the deck &#8212; just enough for a killer vantage point of the 4&#189;-acre flight deck from the windows surrounding him.

On downtime between flight schedules, he can munch on food and read a book.

It took about 16 years of working with catapults before he worked his way up to catapult safety monitor in the bubble on the Norfolk, Va.-based carrier.

&#8220;It&#8217;s the highest station you can attain in the catapults,&#8221; he said, noting that while it may look like a cool job it actually is quite strenuous, with 18-hour-long days during deployment.

Also squeezing in each bubble&#8212; there are two &#8212; is a catapult and arresting gear officer like Lt. Michael Johnson. Johnson sets up the catapult, pushing a button that rifles about 100 aircraft off the deck a day. In two seconds, the four steam-powered catapults thrust a 48,000-pound aircraft from 0 to 165 mph.

Before launch, Johnson does safety checks on deck. Once inside the bubble, he ensures the path is clear, checks the winds and keeps an eye on the board in front of him. If someone sees something unsafe, a button suspending a launch lights up.

Just before launch, he looks at the pilot.

Patton&#8217;s job is to relay messages to Johnson from the central charging panel operator, Petty Officer 2nd Class Chris Lemarie. Below deck, in front of a wall of glowing lights, Lemarie monitors the catapult&#8217;s pressures, dialing in how hard it fires.

Lemarie also verifies the winds and aircraft weight. Up on the flight deck, a weight-board operator, Petty Officer 3rd Class Aland Valbrun, crouches down to peer into the bubble to show Johnson a board confirming the aircraft weight.

Valbrun said he enjoys being in the middle of all the action on the flight deck. Besides, he said, a job in the bubble is a ways down the road for him.