'It's a great day to be gay,' says Germany-based airman 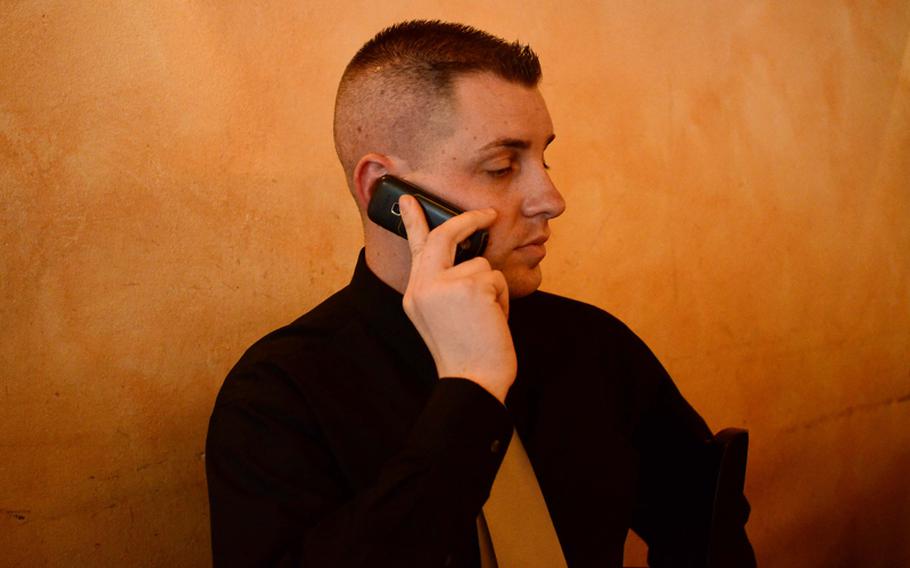 Buy Photo
John Tegeler, leader of OutServe Germany and a Staff Sgt. in the U.S. Air Force, handles calls from work and members of OutServe looking for directions to a restaurant in Kaiserslautern, Germany, where members celebrated the repeal of the U.S. Military's "don't ask don't tell" policy. (Joshua L. DeMotts/Stars and Stripes)

Buy Photo
John Tegeler, leader of OutServe Germany and a Staff Sgt. in the U.S. Air Force, handles calls from work and members of OutServe looking for directions to a restaurant in Kaiserslautern, Germany, where members celebrated the repeal of the U.S. Military's "don't ask don't tell" policy. (Joshua L. DeMotts/Stars and Stripes) 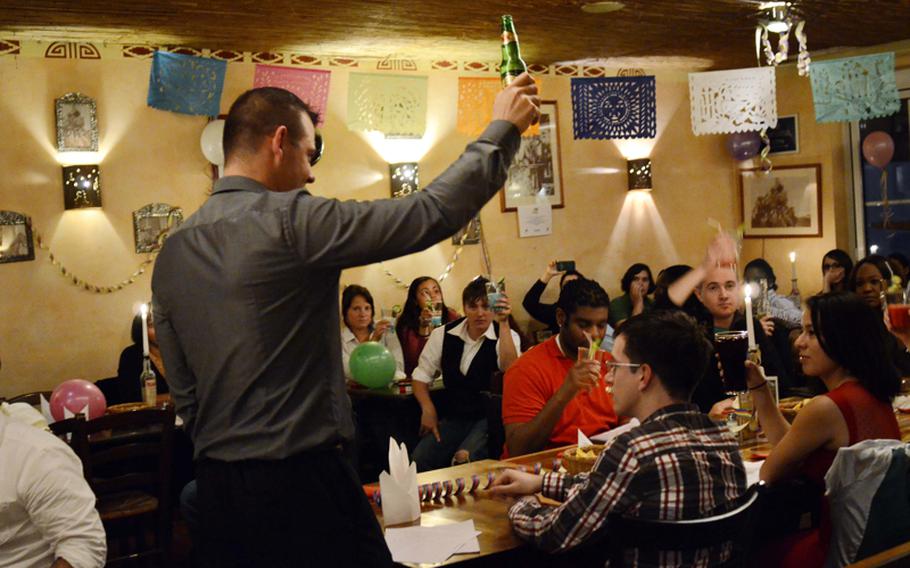 Buy Photo
U.S. Air Force Master Sgt. Kristopher Kobernus toasts to the repeal of 'don't ask don't tell' after giving a speech at a celebration of the day, sponsored by OutServe, a group of gay active-duty servicemembers and veterans. (Joshua L. DeMotts/Stars and Stripes) 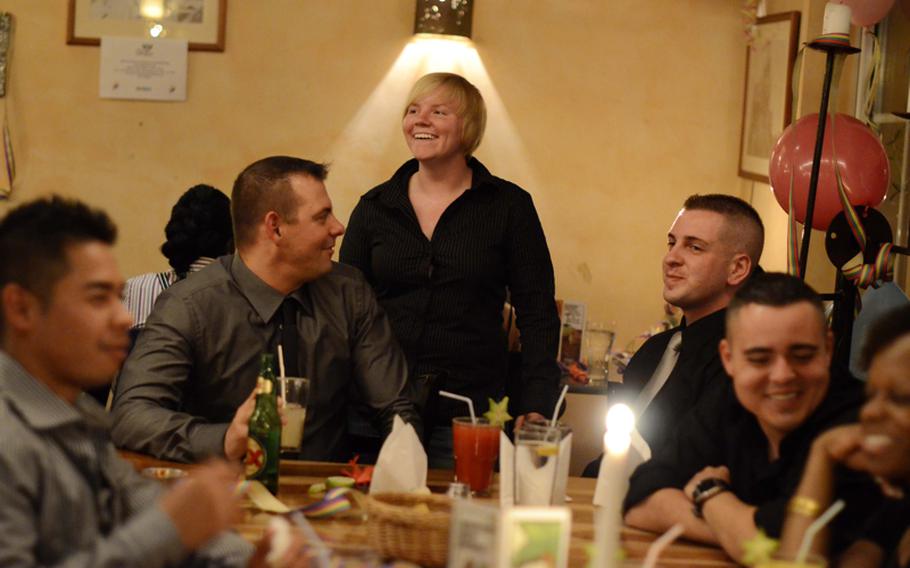 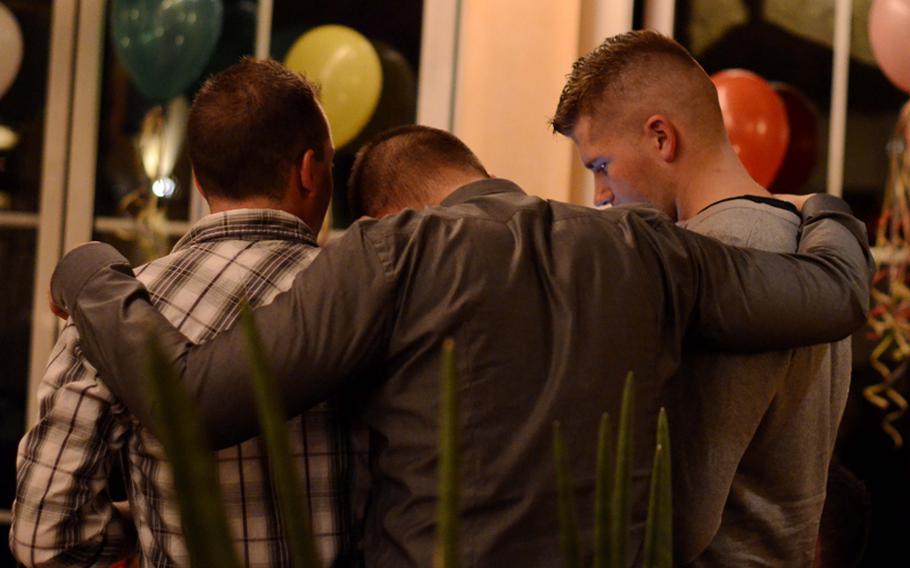 KAISERSLAUTERN, Germany &ndash; The fifty or so men and women, most of them military personnel, dining in the room with balloons on the wall at the Cantina Mexicana restaurant Tuesday night came not just for food but to celebrate a historic day in the U.S. military.

&ldquo;It&rsquo;s a great day to be gay,&rdquo; said Air Force Staff Sgt. Ashley Carothers, not once, but twice, loudly and emphatically.

Carothers, 24, a supply journeyman at Spangdahlem Air Base, Germany, gathered with members of OutServe Germany to mark the official repeal of the &ldquo;don&rsquo;t ask, don&rsquo;t tell&rdquo; law barring openly gay troops from serving in the military.

&ldquo;This is a huge day, not only for me to come out and say, &lsquo;I&rsquo;m gay,&rsquo; but I can introduce my girlfriend to everybody and not have to hide it anymore,&rdquo; she said. &ldquo;It&rsquo;s pretty awesome.&rdquo;

Servicemembers interviewed at the event said the most significant change for them in the wake of the policy&rsquo;s repeal was the prospect of living without the constant fear of getting kicked out of the military for being gay. No more having to introduce partners as friends, of avoiding holding hands in public, of meeting in far-off cities away from U.S. military communities.

&ldquo;I can live my life how I like to,&rdquo; said John Tegeler, 27, an Air Force staff sergeant at Ramstein Air Base, Germany. Tegeler, who coordinates transportation for all distinguished visitors coming to Ramstein, founded the OutServe Germany chapter a year ago. It now has a membership of 295 gay, lesbian and bisexual military personnel from throughout the country.

Master Sgt. Kristopher Kobernus is among them. &ldquo;There&rsquo;s certainly a huge weight off of my shoulders,&rdquo; the 37-year-old Air Force intelligence analyst at Ramstein said of the repeal.

Kobernus had good reason to worry. In 2002, while stationed in Seoul, South Korea, he was arrested for violating a curfew order. The military police who picked him up made it a point to tell his first sergeant that he was arrested at a gay bar. He was scared, fearing reprisal. Fortunately, Kobernus said, his first sergeant didn&rsquo;t seem to care and the issue was never brought up again.

&ldquo;After 16 years of serving in silence, it&rsquo;s a big step,&rdquo; he said.

Kobernus&rsquo; boyfriend, Army Sgt. Donald Anderson 26, a helicopter mechanic from Ansbach, made the three-hour drive to Kaiserslautern for Tuesday&rsquo;s celebration. He said he still worries about what people will think when they find out he&rsquo;s gay. &ldquo;There are some people I have to work with and interact with, who, I know on a professional level, they&rsquo;ll put it aside, but you know that it&rsquo;s hard for them to comprehend it.&rdquo;

Some are still hesitant to divulge their sexual orientation because they fear the new policy could be reversed if the White House changes hands after next year&rsquo;s presidential election.

&ldquo;There&rsquo;s a concern: Will this be a short-term victory?&rdquo; said Jenny, a 31-year-old gay soldier assigned to Landstuhl Regional Medical Center who asked that only her first name be used.

Carothers and others said despite the victory of being able to serve openly, the struggle for gay servicemembers is far from over. Carothers hopes to eventually be able to marry her girlfriend and have her accompany her as a family member to future duty stations.

&ldquo;There are still people in the military who still think we shouldn&rsquo;t serve openly,&rdquo; Kobernus said. &ldquo;We need to prove them wrong.&rdquo;