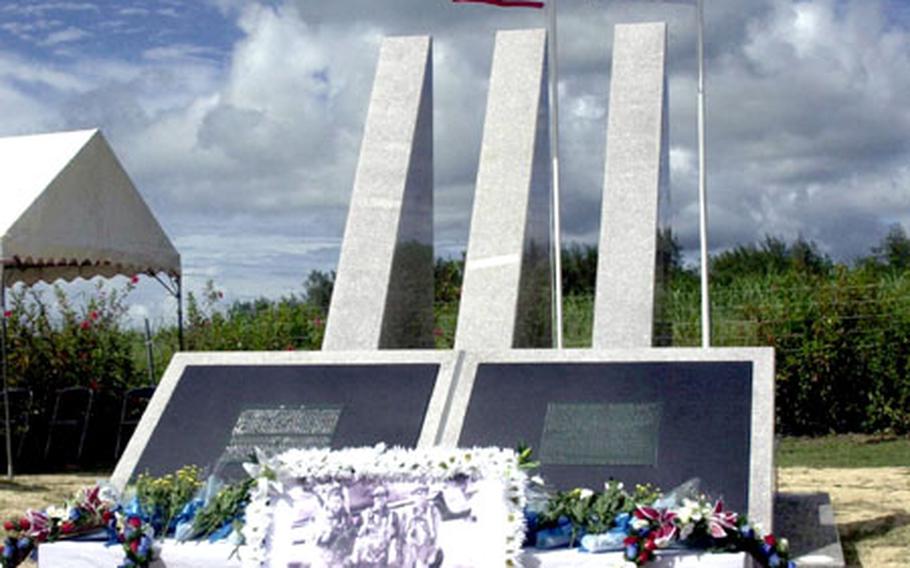 The monument on Ishigaki island for three American fliers executed by the Japanese during World War II is shown shortly after its dedication in August 2001. (David Allen / S&S)

CAMP FOSTER, Okinawa &#8212; Officials and residents of Ishigaki island, halfway between Okinawa and Taiwan, on Friday were to commemorate one of the Battle of Okinawa&#8217;s most tragic incidents.

Friday marks the 60th anniversary of the Japanese Imperial Navy&#8217;s brutal execution of three U.S. Navy aviators shot down over the island.

A monument to their memory was erected in 2001, paid for by a group of islanders and U.S. servicemembers on Okinawa.

Shinsen Oyama, a member of the executive committee that built the monument, said about 60 Ishigaki residents planned to gather there Friday to pray for the souls of the three Americans who perished on foreign soil.

&#8220;We have been holding a memorial service every year,&#8221; Oyama said in a telephone interview Wednesday. &#8220;But we consider this year very special because it marks the 60th anniversary. Bit by bit, the people of Ishigaki planted trees and flowers around the monument in an attempt to console the souls of the three Americans.&#8221;

After the executions, the bodies of the three aviators &#8212; Navy pilot Lt. Vernon L. Tebo, 28, and 1st Class Petty Officers Robert Tuggle Jr., 20, and Warren H. Lloyd, 24 &#8212; were cremated and the ashes scattered in the water between Ishigawa and nearby Iriomote island in an attempt to cover up the war crime.

The monument consists of three six-foot-tall stone triangles symbolizing the rise of the men&#8217;s spirits to heaven. With inscriptions in English and Japanese, it overlooks Iriomote Island.

The three Navy aviators were shot down while on a photo reconnaissance mission over Ishigaki on April 15, 1945. They parachuted to safety on the island, only to be rounded up quickly by Imperial Japanese sailors.

After they were tortured and interrogated, Tebo, of Chicago, and Tuggle, of Ranger, Texas, were beheaded, according to witnesses. Lloyd, of Long Island, N.Y., was used for bayonet practice before he died.

The incident resulted in the war crimes conviction of 41 Japanese sailors. Seven were executed.

The memorial was the idea of Takeo Shinohara, a native of the island 265 miles south of Okinawa.

Shinohara, 64, a University of the Ryukyus professor, first learned of the executions while doing research toward seeking government compensation for families of 3,075 islanders who died from malaria after the Japanese Imperial Army forced them to evacuate to a mosquito-infested valley during the Battle of Okinawa.

Shinohara said Americans who arrived on Ishigaki after the war did much to improve the islanders&#8217; health, including providing lifesaving medicine and improving the island&#8217;s sanitation.

In contrast, he said, the Japanese military would not share its anti-malaria medicine with civilians.

&#8220;Our wish is that people who visit this place pray for the spirits of the three Americans, taking seriously to heart the tragedy that war caused,&#8221; said Shinyo Shikina, who chairs the memorial committee.

&#8220;It is our responsibility to hand down our firm pledge not to let war happen again here on this peaceful island,&#8221; he said.