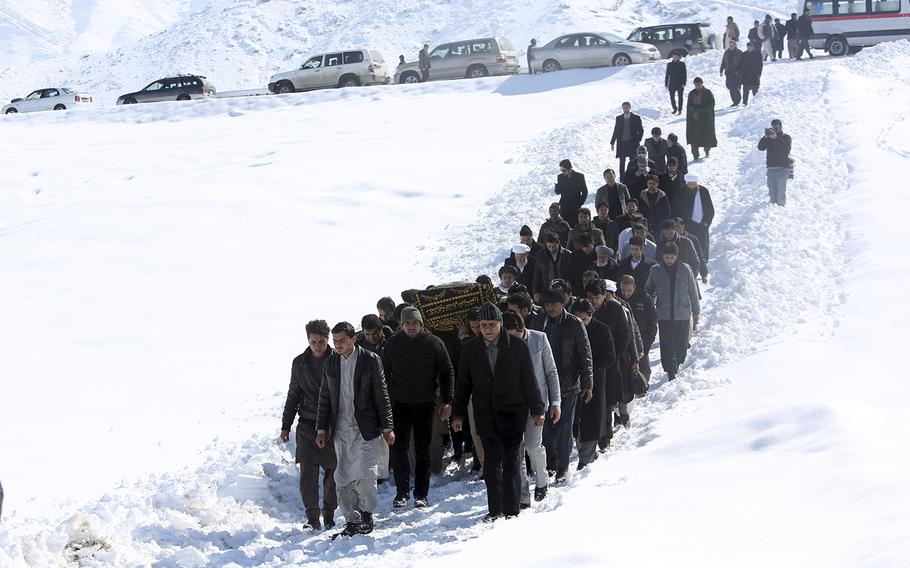 Men carry the coffin of a relative who died in a suicide attack on the Supreme Court in Kabul, Afghanistan, Wednesday, Feb. 8, 2017. (Rahmat Gul/AP)

The militants claimed responsibility for the Tuesday attack outside Afghanistan’s top court, which stoked fears that the group could be spreading out from its traditional strongholds along the country’s mountainous border with Pakistan.

The Islamic State warned in a statement Thursday that “more devastating and bitter” attacks against Afghan courts and judicial personnel were to come.

“Let the apostates, and at their head the judges of the tyrants, know that the disbelieving judgments they issue against the monotheist mujahedeen serve the crusaders and will not pass without severe punishment,” said a statement by the group translated by the SITE Intelligence Group. The militants refer to coalition forces as “crusaders.”

The statement identified the attacker as Abu Bakr al-Tajiki, a Tajik national.

Kabul police said the man approached the court on foot and detonated an explosive vest in a parking lot as employees were leaving for the day.

“This is the act of Daesh,” said Lutfullah Azizi, Jowzjan’s governor, using an Arabic abbreviation for the Islamic State. The group has not claimed responsibility for the deaths.

Azizi said that a number of Islamic State militants are in Jowzjan fighting government troops and harming innocent civilians.

Fighters pledging loyalty to Islamic State began operating in Afghanistan in 2015, taking credit for attacks in eastern provinces and in the capital, Kabul. They have also regularly clashed with Taliban guerrillas, whose leaders have condemned the Islamic State fighters as foreign murderers.

The U.S. military, which has been fighting the Islamic State in Afghanistan as part of a counterterrorism mission, says there are roughly 1,000 loyalists in the country, mostly in Nangarhar province.