Islamic State tactics and lack of intel strain US strategy 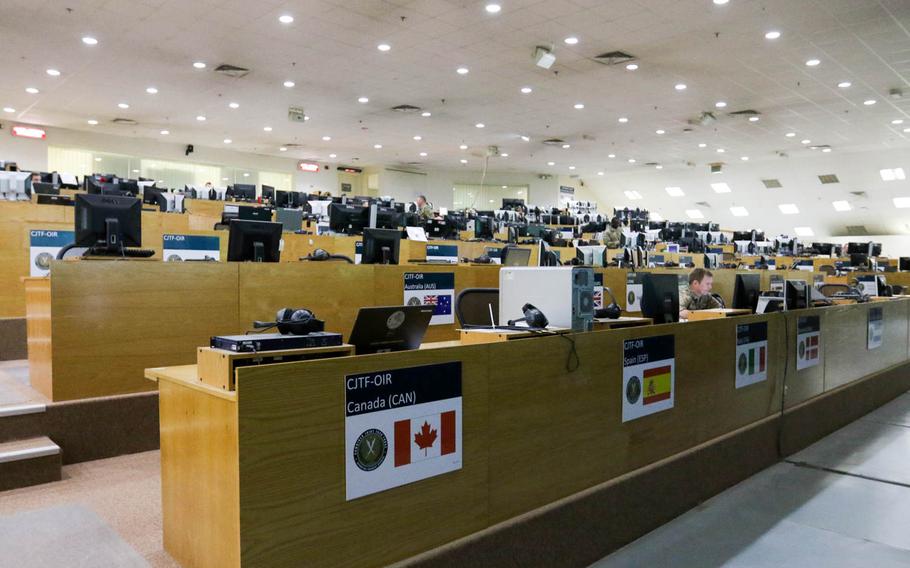 The operations center at the headquarters for Combined Joint Task Force-Operation Inherent Resolve in Camp Arifjan, Kuwait, May 12, 2015. From here coalition personnel monitor efforts against the Islamic State group in real time 24 hours a day. (Hendrick Simoes/Stars and Stripes)

Just days before the Islamic State seized Ramadi, U.S. military officials coordinating the war insisted that their strategy was working, with Iraqi and allied forces making gains and putting the militants on the defensive.

At the same time, however, American officials at the coalition command center in Kuwait spoke of how the Islamic State is adapting to coalition airstrikes, tailoring their movements to avoid exposing units to punishing air attacks and hiding within the civilian population.

In hindsight, those comments laid bare deficiencies in the battle against the Islamic State, including the lack of timely intelligence and the need to rely exclusively on Iraqis for “boots on the ground.”

Before Ramadi fell over the weekend, the campaign appeared to be on track. Iraqi forces backed by Western airstrikes recaptured Saddam Hussein’s hometown of Tikrit and pushed Islamic State fighters from parts of Diyala province northeast of Baghdad and from Shiite and mixed communities on the southern outskirts of the capital.

The Iraqis also made incremental gains in the Euphrates River valley northwest of Ramadi, pushing the Islamic State back from the strategic Haditha Dam and the town of al-Baghdadi near the al-Asad air base where U.S. personnel are training Iraqi recruits.

“I think we’re definitely on our campaign plan,” Marine Brig. Gen. Tom Weidley, chief of staff of Joint Task Force Operation Inherent Resolve, told Stars and Stripes at the command center at Camp Arifjan, Kuwait, several days before Ramadi fell. “We are where we want to be at this point of time. Perhaps we are a bit ahead of where we thought we would be at this point.”

The fall of Ramadi, however, cast doubt on that assessment. After months of fighting, the Islamic State used the cover of a sandstorm, which reduced visibility for drones and attack aircraft, to launch a lightning strike across the Euphrates River in Ramadi, seizing the provincial government headquarters and fanning out into the heart of the city.

With Islamic State militants controlling the main supply line into the city, Iraqi forces — including the army, police and Sunni tribesmen — collapsed. Convoys of trucks and equipment, jammed with terrified soldiers, streamed out of Ramadi for the nearby Habbaniyah air force base, where the government was assembling a force of Shiite militiamen to try to recapture the city.

It was the worst defeat suffered by the Iraqis since the Islamic State seized Mosul last summer. It will likely deliver a severe blow to Iraqi self-confidence, which officials at Camp Arifjan believe is essential for victory.

Before the city fell, officials at the Joint Task Force headquarters — where more than 500 personnel from 15 nations coordinate operations in Iraq — spoke of ways the Islamic State was adapting to the changing battlefield. They offered what turned out to be a forecast of how the fight for Ramadi would unfold.

When the Islamic State swept across northern and western Iraq last summer, they used large, mobile formations of fighters, overwhelming Iraqi government forces without fear of attack from the skies.

“We’ve gone from seeing large masses of Daesh gaining new ground, to them having to really defuse their effort, and basically hold on to just their basic lines of communications,” said Col. Chuck Krumwiede, the chief of current operations, using the Arabic term for the Islamic State. “They are digging trenches, like 10 foot trenches.”

“We’re fighting them in such a way we frankly have never fought an asymmetric hybrid enemy before,” said Col. Sam Saine, chief of joint fires. “This is not a traditional enemy like Kosovo or Desert Storm. It’s small groups of three to five guys, driving around in civilian vehicles, hiding their weapons, hiding their movement and staying in urban areas. They blend in with the population and only expose themselves for short periods of time because they know we are watching and they know we have the capability to strike them quickly.”

Clearly, however, the Islamic State is capable of shifting gears and exploiting developments in the battle space, too.

For months, the Islamic State had been moving slowly toward the center of Ramadi, fighting in built-up areas on the edge of the city and carefully assembling a large enough force to strike into the heart of Ramadi. When the attack came, and without U.S. air controllers with Iraqi forward units, the sandstorm made it difficult for allied pilots to distinguish among militants, friendly forces and civilians, The New York Times reported Tuesday.

It was unclear whether the loss of Ramadi will force changes in the basic allied strategy, which includes airstrikes, training Iraqi troops and advising and assisting the Iraqi military with its planning. President Barack Obama has ruled out large formations of American ground troops.

Foreign analysts, however, have noted that the U.S. and its allies would probably need to insert combat units back into the country in order to defeat such a highly capable enemy as the Islamic State.

“You either put boots on the ground or keep out of it, that’s the only way to tackle these things,” said Ed Blanche, a member of London’s International Institute for Strategic Studies and an expert on Middle Eastern wars, based in Beirut.

Officials at the Joint Task Force headquarters confirmed there have been discussions about putting U.S. troops closer to the fighting. They did not elaborate, but such steps could include air controllers to coordinate strikes during inclement weather.

Before Ramadi fell, however, the officials said the view at Camp Arifjan was that such a step was not necessary, since the strategy was working and the Islamic State was on the defensive.

The U.S. had been reluctant to see Shiite militias used in heavily Sunni areas such as Ramadi and surrounding Anbar province for fear of exacerbating tensions between Sunnis and Shiites. However, efforts to recruit and arm Sunni volunteers has stumbled, and on Monday, Pentagon spokesman Col. Steve Warren said that “as long as the militias are controlled by the central Iraqi government, there is a place for them.”

Even before Ramadi, U.S. officials thought they were in for a long fight.

“This is a long-term effort,” Weidley said. “It’s not something you can put a date on.”