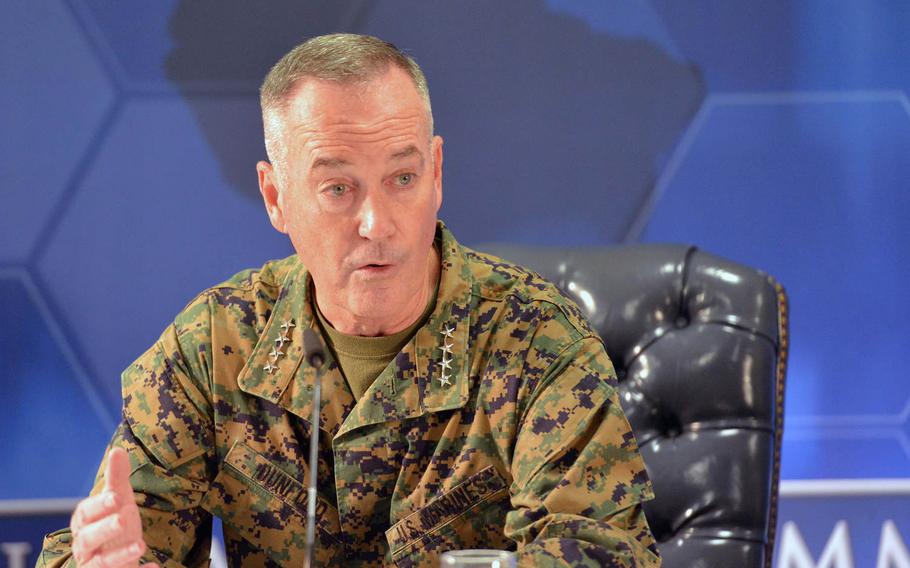 STUTTGART, Germany — The Islamic State is suffering higher casualty numbers in Libya, a sign that the terror group is growing weaker in the country, said the U.S. military's top officer.

“I don’t think there is any doubt that the Islamic State in Libya is weaker now than it was some months ago,” Marine Gen. Joseph Dunford, chairman of the Joint Chiefs of Staff, told reporters Monday in Stuttgart. “There is no question about it. They have suffered significant casualties.”

Dunford, who was in Stuttgart to oversee a change in leadership at U.S. Africa Command, said there are indications that rival governing factions in Libya also are beginning to coalesce, something he described as a positive trend line during the past two months.

Islamic State fighters have sought a foothold in Libya, particularly in the areas around the Mediterranean port cities of Sirte and Benghazi, during the past years.

In April, Gen. David Rodriguez, who commanded AFRICOM until Monday, said there were estimated to be as many as 5,000 Islamic State fighters in Libya, but that the group was being challenged by government forces and an array of rival militias.

Today, “we assess there are just a few hundred fighters left in Sirte itself,” said Dunford, who did not offer an assessment of the total number of Islamic State militants in the country.

Since the fall of Libyan strongman Moammar Gadhafi in 2011, Libya has been rent by fighting among rebel groups and government forces, all vying for control of the country. During the past year, the Islamic State group has sought to take advantage of the security vacuum, establishing a presence in places such as Sirte. The U.S. also has conducted occasional strikes against the militants in Libya.

Gen. Thomas Waldhauser, who assumed command of AFRICOM on Monday, said during Senate testimony in June that the military lacked a “grand strategy” to combat the Islamic State in Libya. At his new headquarters in Stuttgart for less than 48 hours, Waldhauser said he would be assessing conditions in the country.

“Our objectives in Libya have remained constant for a while,” said Waldhauser, adding that the prime focus is supporting political reconciliation efforts in Libya.

U.S. and NATO officials have long said a prerequisite for a more robust military campaign against the Islamic State group in Libya is a stable government.

While AFRICOM airstrikes in Libya have been conducted on occasion, U.S. officials say the focus is on eliminating clear threats to U.S. personnel and interests rather than an expansive effort like the U.S.-led coalition targeting the Islamic State in Iraq and Syria.

In addition to establishing a so-called caliphate in Syria and Iraq, the Islamic State has sought to expand to other parts of the region, including Afghanistan, Libya and other locations in Northern Africa.