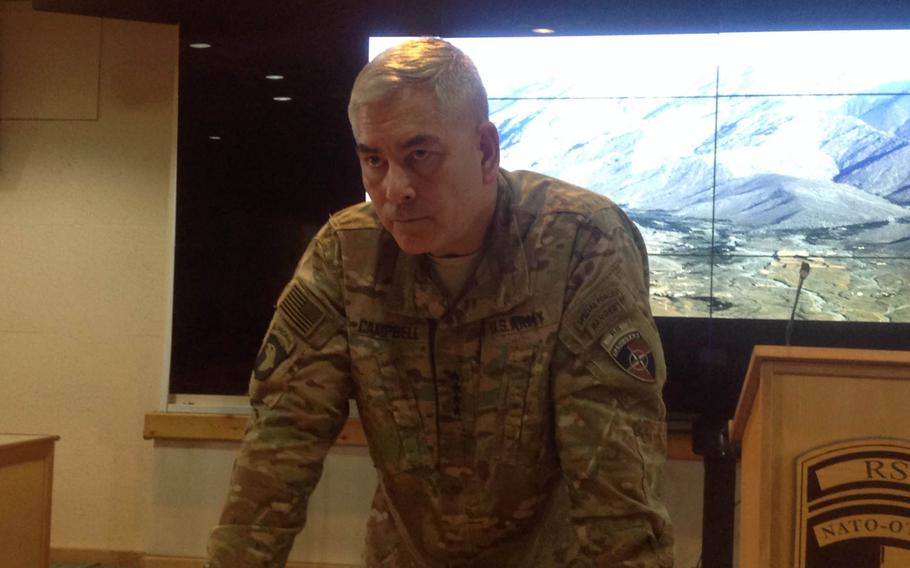 Buy Photo
Gen. John Campbell, commander of U.S. and coalition forces in Afghanistan since 2014, listens to a reporter's question at a news conference at NATO Headquarters in Kabul on Feb. 13, 2016. Campbell said the Islamic State group in Afghanistan is resilient but less of a danger to the Afghan government than the Taliban. (Slobodan Lekic/Stars and Stripes)

KABUL, Afghanistan — An offshoot of the Islamic State has failed so far to replicate its success in Syria and Iraq and is struggling to expand its footprint in Afghanistan.

Analysts attribute the group’s inability to expand rapidly to Afghanistan’s traditional resistance to foreign domination and to the fact that the group’s violent ideology doesn’t resonate among even the most conservative segments of society.

By contrast, the Taliban are a purely local guerrilla movement that has rejected any internationalist ideology. They have strongly resisted encroachment by Islamic State militants while continuing to fight the government they consider to be a U.S. vassal.

“The Taliban are the main danger to the (Afghan) national government, not Daesh,” Gen. John Campbell, the outgoing commander of U.S. and NATO forces in Afghanistan, told reporters earlier this month, using an Arabic acronym for the extremist group.

However, Campbell, who also oversees counterterrorism efforts in Afghanistan, added that despite the reverses it has faced in Afghanistan, the Islamic State offshoot remains resilient and retains the ability to recruit “quite well.”

An estimated 1,000 to 3,000 Islamic State fighters are concentrated in the area bordering Pakistan, mostly in the isolated, mountainous parts of eastern Nangarhar province, Campbell said.

President Ashraf Ghani recently went so far as to claim that the group — known as Islamic State-Khorasan, for a historic region covering parts of present-day Iran, Afghanistan and Turkmenistan — had been “defeated” in Afghanistan in the past year.

The Islamic State offshoot initially established a small presence in Afghanistan a year ago in southern Helmand and Kandahar provinces. But its first leader, Mullah Abdul Rauf Khadim, a former Taliban commander who broke with the insurgents in late 2014, was killed in an airstrike in February last year. His successor met the same fate a month later, and since then, the Islamic State has been absent from the south.

NATO and Afghan security officials say the group consists mainly of defectors from the Afghan and Pakistani Taliban and members of the Islamic Movement of Uzbekistan, which has been operating for years in the border area with Pakistan. They say the Islamic State group’s leaders now are mostly Pakistani radicals located on the other side of the border.

Borhan Osman, a researcher at the Kabul-based Afghan Analysts Network who studies militant groups, said the Islamic State miscalculated when it attempted to establish a presence in Afghanistan — a long way from its heartland in the Middle East.

“Afghanistan is not a Daeshland … (it) has been historically hostile to foreign elements,” Osman said, using the Arabic acronym for the Islamic State group. “The fact the Taliban are a local group with an indigenous … constituency is the biggest factor for its survival.”

“That makes it one more armed band among many, this one pursuing nebulous political goals (and) trumpeting a narrative with questionable appeal to the locals,” Hazelton said.

The local Islamic State group attempted last year to take advantage of infighting within the Taliban that broke out after the announcement of the death of Taliban founder and leader Mullah Mohammad Omar. Exploiting confusion within the Taliban as Mullah Akhtar Mansoor assumed control, analysts said, the Islamic State expanded its presence into Kunar and Nuristan provinces along the eastern border with Pakistan.

But the effort to establish a foothold quickly collapsed when Mansoor sent about 1,000 Taliban fighters to the region to push them out, government security officials said.

Even in Nangarhar, the Islamic State’s foothold is becoming increasingly precarious.

“Daesh is on the run,” said Hazrat Hussain Mashreqiwal, a police spokesman in Nangarhar. “We have broken their back. We have killed, wounded or arrested hundreds of them.”

They were present only in the most remote parts of the rural Nangarhar district of Achin, on the Pakistani border, Mashreqiwal said.

“The local people are against them everywhere,” he said.

A pro-government militia consisting of local volunteers and headed by deputy parliamentary speaker Zaher Qadir also has started hunting the militants through the mountains.

On Wednesday, the security forces announced they had killed 45 Islamic State fighters in Achin district in the past two days.

Islamic State, which has tens of thousands of fighters in Syria and Iraq, has sought, with varying degrees of success, to spread out to other regions, including North Africa and Central and South Asia.

In Libya, which has been without an effective central government since the ouster of former strongman Moammar Gadhafi in 2011, Islamic State fighters have carved out a 100-mile-wide coastal enclave centered on the Mediterranean port of Sirte. But in other countries, such as India, Bangladesh and Indonesia, their activities remain embryonic, although they have claimed responsibility for isolated attacks on police or other religious groups.

It remains unclear just how much money and instructions these local offshoots are receiving from the Islamic State’s leadership based in Syria and Iraq. In those two countries, the group’s self-proclaimed caliphate is under increasing pressure from fierce bombing campaigns by the U.S.-led coalition and the Russian air force, as well as government armies and Kurdish militias.

“How much (assistance) is coming from Syria and Iraq? Hard to tell,” Campbell said. “But we do believe the senior leadership here in Afghanistan does communicate with (Islamic State) leaders in Iraq and Syria.”

Last month, after a Jan. 13, 2016, attack on the Pakistani consulate in Nangarhar’s capital of Jalalabad, President Barack Obama gave U.S. commanders here the authority to strike Islamic State targets in Afghanistan. It was the first such order allowing the U.S. military to attack the group outside its strongholds in Syria and Iraq.

Because the group’s fighters operate in very small bands and are constantly on the move in the rugged region, it is difficult for ground forces to locate and engage them before they slip across the porous border.

U.S. drones, which can loiter over the mountains for long periods, are able to detect and report their positions to the hunting parties, said a Western official who asked not to be named because he was not authorized to comment on the situation.

In one of the first attacks after that order, a drone strike destroyed the group’s mobile radio station, known as the Voice of the Caliphate, which had been broadcasting illegally from an inaccessible area in Nangarhar province.

Habiba Sadaat, a member of parliament from southern Helmand province, said the Afghan security forces had nipped the group in the bud there last year, forcing Islamic State fighters there to flee to difficult-to-access areas along the Pakistani border.

“Daesh was stopped from getting stronger right at the beginning,” she said. “But the government must keep up the same pressure or they will come back if they are ignored.”