Islamic State leader in Afghanistan reported killed in US airstrike 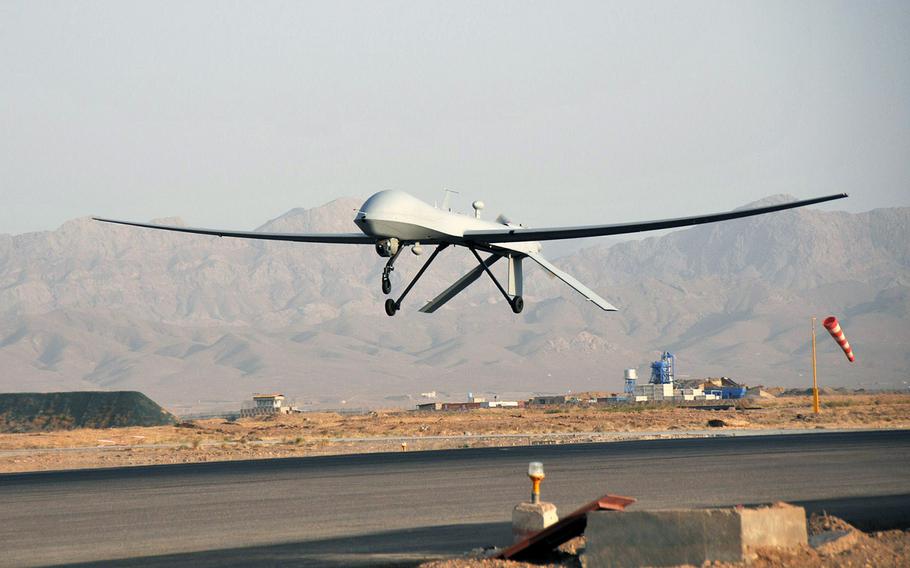 An unmanned aerial vehicle takes off from a Herat, Afghanistan, runway on Aug. 15, 2012. (Angelo Salzano/Italian Army/U.S. Department of Defense)

KABUL, Afghanistan — The top Islamic State commander in Afghanistan has reportedly been killed in a U.S. drone strike in the eastern part of the country, the Afghan intelligence agency said Saturday.

Hafiz Saeed, the purported leader of Islamic State of Khorasan, along with 30 other insurgents were killed Friday in Achin district of Nangahar province — about 120 miles east of Kabul — the National Directorate of Security said in a statement. The Islamic State group refers to Afghanistan as the Khorasan state.

Col. Brian Tribus, the spokesman for the U.S. military in Afghanistan, confirmed that American forces had conducted an airstrike in the Achin district on Friday. He did not say whether the strike was carried out by a drone.

Achin has been a hotbed of alleged Islamic State activity since the group began making inroads into Afghanistan.

Foreign analysts and NATO military commanders say the group has a very limited presence in the country, mainly consisting of disaffected Taliban fighters. But they believe the Islamic State is trying to lay the groundwork for a much more robust presence in the future.

The Taliban have warned Islamic State to stay out of Afghanistan, threatening to react harshly if anyone tried to undermine their “achievements” during the 14-year war here.

Saeed was the third senior Islamic State leader to have been killed in Achin this week. Two other commanders, identified as Shahidullah Shahid and Gul Zaman, died in a U.S. drone strike on Tuesday.

Saeed and Shahid had both been top commanders with the Pakistani Taliban before shifting allegiances to the militant group based in Syria and Iraq.